Illicit logging operations have affected wildlife and transformed forests into near-deserts in as little as a few years, Ayn al-Madina writes 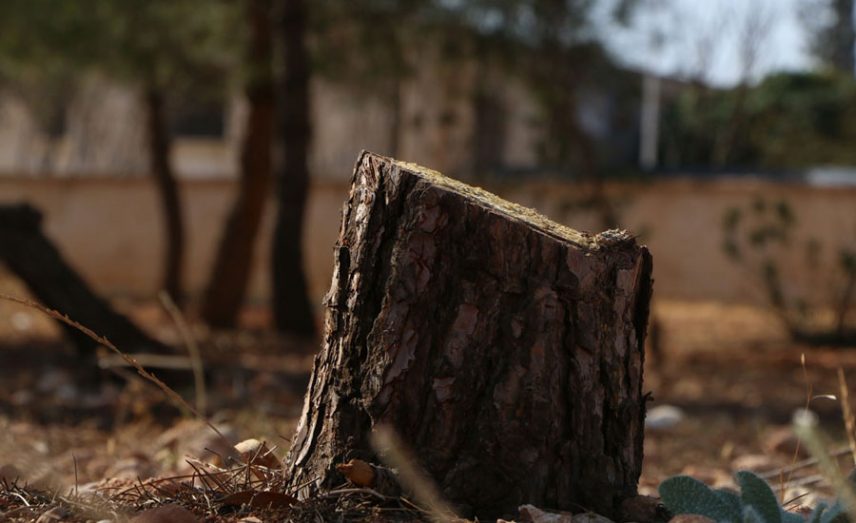 Winter has entered its first month at a time when most Syrian families struggle to provide means of warmth amid massive inflation in fuel prices and neglect from humanitarian agencies. The approach of winter has become a nightmare for families in opposition areas, and a comfortable cushion for traders and some rebel groups who cut down trees and sell them at massive prices, sometimes more than 85,000 Syrian pounds ($175) for a single ton.

The forests and woods in areas such as Idleb, the northern Hama countryside and western Aleppo have suffered from illicit logging operations in recent years, which has affected wildlife and transformed forests into near-deserts in as little as a few years. Idleb province alone had contained 82,211 hectares of trees, such as cypress, pine and oak, according to Agriculture Ministry statistics from 2012.

In terms of the environment, the trees have a major role in absorbing carbon dioxide and providing oxygen. Their presence represents an important factor in filtering and purifying the environment in which we live.”

The number of felled trees is much higher than those planted, which will likely turn these areas into desert or near-arid areas over a short period as a result. No trees have been spared the logging operation, even fruit trees and especially olive trees.

Abou Ali, a sawmill worker who was displaced from Deir-ez-Zor, said that many local people have resorted to woodcutting to make a living, as the price of a ton of cypress wood has reached 65,000 Syrian pounds.

The groups participating in the illicit logging operation sell tons of wood to traders “at a price between 40,000 to 45,000 pounds, depending on to the type of tree, and then the trader sells it after that at twice that price, and then employs some people to cut these trees as day laborers for 2,500 Syrian pounds,” according to Ahmed al-Saleh, a laborer with one of these factions. “The trees which they cut are public property on the main roads, like the Aleppo-Damascus road and the forests such as Harem and those in the Turkmen Mountains,” he said.

A member of a local council in the western countryside, who refused to give his name, said 1,200 displaced families live in his village without any means of cooking or heating. “So how will they manage their affairs in light of the lack of work opportunities and the absence of support and the terrible circumstances?” he asked. “They will continue to cut down trees to secure fuel despite police patrols.”

The General Organization for Seed Multiplication launched a voluntary campaign through which it planted a number of trees in an attempt to cover the shortage resulting from the logging. Ahmed Shahada, head of the agriculture office in the liberated Aleppo provincial council, said: “The governorate submitted a number of projects to the Aid Coordination Unit to establish tree nurseries to cover the shortfall, but there has not been any response yet.”