Turkish trade and services, including post and mobile, are stretching throughout the Euphrates Shield areas in northern Syria, Souriatna wirtes 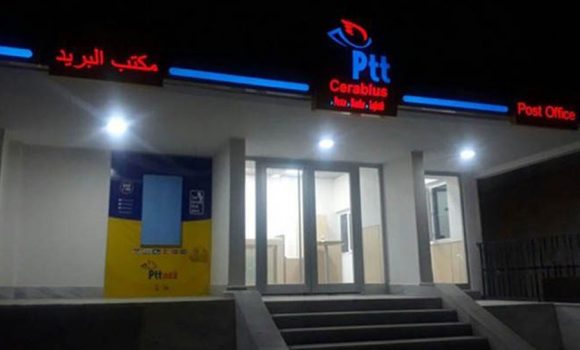 The Turkish-Syrian border has become a major economic artery, as Turkish commercial activity inside Syria has diversified from foodstuffs, household goods, construction materials and spare parts to an expansion of the Turkish communications networks and the opening of Turkish financial institutions inside the Euphrates Shield areas, in addition service projects which Turkey has carried out in the northern and eastern countryside of Aleppo.

Turkish exports have also seen a major increase, with the West Mediterranean Exporters Association saying in a statement that “Turkish exports in terms of vegetables and fruits to Syria has seen a major increase from $1.5 million in the first half of last year to $5.23 million in the first half of this year, with Syria occupying the second place among the main countries importing from Turkey.”

A media figure in the local council in Sarmada, Abdou Lazqani, told Souriatna: “Goods imported from regime areas comprised 80 percent of the total goods in the Sarmada market due to the decrease in their prices because they are tied to the Syrian pound.”

However, he said, the heavy pressure from regime checkpoints and the high fees which they impose on the movement of goods to liberated parts has pushed trade in the Sarmada market to depend largely on Turkish goods. He said that this “is because they are easier to bring in from the Bab al-Hawa crossing and are governed by prices depending on the exchange rate.”

Mohamad Idlebi, a spare parts dealer in Idleb city, said: “Ninety percent of my goods are Turkish. In the beginning traders in the liberated areas did not accept Turkish products because of their lower quality compared with regime goods, but because they are alone in the market it makes them necessary, and with the passage of time available Turkish goods started to increase and their quality also increased.”

With the beginning of Turkish forces entering into liberated areas in northern Syria under the “de-escalation” agreements, Turkish communication networks have begun to reach parts of the countrysides of Aleppo and Idleb. Here, Turkcell has expanded its network, extending from the city of Haritan to the north of Aleppo, Atarib in the western countryside and the Bab al-Hawa crossing in Idleb province. Turkish satellite internet has also spread in liberated areas.

Mahmoud al-Karami, a resident of Atarib, said: “The communications network has been cut for years, and so we depend on satellite internet, which has limited scope. But now it is possible to use Turkish networks at reasonable prices, with the price of one package at 4,200 Syrian pounds, including 50 minutes calling and one gigabyte of internet.”

In terms of expanded commercial scope, the Turkish government has opened a branch of the Turkish postal service PTT in Jarablus, with its spokesman Badr Kajik saying that “the building has been furnished but work has not yet commenced.”

Badr added: “The branch acts as a money transfer office to and from Turkey, and will contribute to a large extent to reducing the burden and transfer of postal fees.”

According to Souriatna sources, another PTT branch is expected to be opened soon in the city of Al-Bab in the eastern Aleppo countryside.