Opposition activists in the northern province hope to remove children from the burden of war through literature, Tamaddon writes 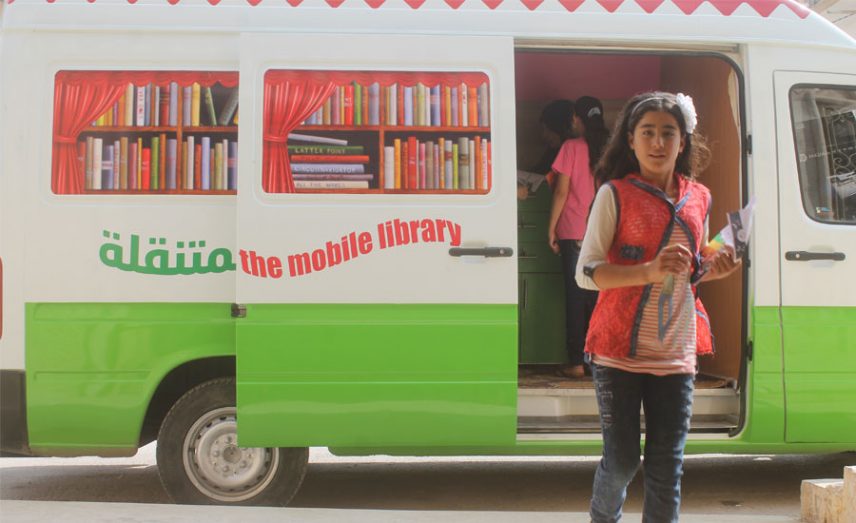 With its bright colors and distinctive design, a van loaded with hundreds of different books is touring Idleb province.

The mobile library initiative, launched by activists displaced from the Damascus countryside and sponsored by the Dari Sustainable Development organization, aims to spread awareness and culture among children who have suffered the scourge of war.

The initiative hopes to bring libraries to children cut off from school because of the conflict that they have endured for years. An uncommon initiative in areas outside Assad regime control, it has made it easier for children to obtain books without any burden or effort.

Ahmed al-Mujahid, who works for the project, told Tamaddon: “The idea of the mobile library came from a group of activists from the city of Daraya that were previously working within the blockaded city. After they were displaced to northern Syria last year, and with the help of a group of volunteers from various parts of Syria, we resumed our work and activities in various cities and villages of Idleb provinces, beginning in the city of Hizano."

He added that the project aims to compensate children for the knowledge and learning they have been deprived of, as well as remove them from the atmosphere of war, depression and suffering.

“The school libraries closed in most Idleb areas, either destroyed or put out of service because of bombardment. This is likewise the case for cultural centers and libraries, which are totally inactive,” he explained.

Mujahid added: “The wartime conditions have forced many children to leave school, either because of displacement or constantly moving from another place or in order to support their family which has lost a breadwinner. Our aim is to push children toward thinking about returning to school and to raise their intellectual capabilities, broaden their understanding, and to motivate them to search for knowledge and culture.”

The mobile library receives books covering numerous fields, and are sorted and selected to fit the targeted segment of children and adolescents.

“At the start of the mobile library project, we formed a council to select and purchase books from the publishing houses and book vendors, taking into account good language and excellent technical production, and prepared lists of them to ensure the selected books covered most required areas,” he said, adding: “We selected the most appropriate ones, in addition to avoiding the presence of any problematic titles, whether socially or intellectually, which might lead to problems for the team while carrying out its work.”

He said that the library contains a number of books which are targeted primarily at children and adolescents, who can borrow the books during the trip’s period — which ranges between three and six hours.

According to Mujahid, the library’s books range from fiction, entertainment, history and children’s stories, in addition to educational books in a number of fields such as astronomy, computers and biology. There are also cultural, literary and self-development books, and some titles specialized in education and administration. “Most of these books are for young and developing people, and the rest are for advanced ages,” he said.

The library has made a number of trips in northern Syria, the first of which was launched from the town of Hizano, and then expanded to include other areas in most of northern Idleb countryside.

The project has met with a good response from children and adolescents, and attendance by parents and teachers in areas which the library visited.