Contest between several parties for control of the Syrian-Iraqi border town pits ISIS against attacks from numerous sides, Souriatna writes 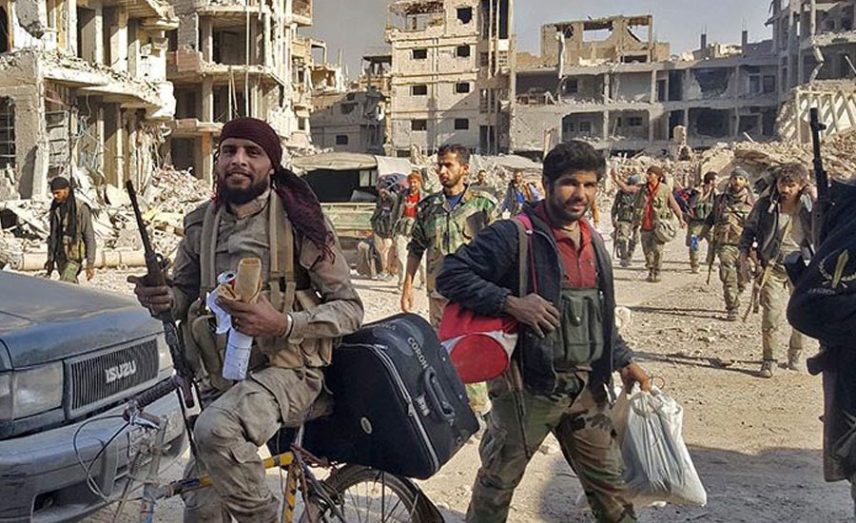 After more than two months and the death of hundreds of civilians, the Assad regime, backed by Russia and allied militias, announced it had taken the former Islamic State (ISIS) stronghold of Deir-ez-Zor, and is now training its sights on the city of Albu Kamal.

The Assad regime sees Albu Kamal as a primary target due to its position on the Syrian-Iraqi border, and is racing against the Syrian Democratic Forces, which is supported by the U.S.-led international coalition, to arrive first in the town.

After Syrian government forces and their allies retook large areas of the province and the its capital, they hurried to comb the city’s districts and remove explosives left behind by ISIS in buildings and squares.

Military expert Mahmoud Ibrahim told Souriatna: “The regime’s swift advance and its control over Deir-ez-Zor came as a result of the vanishing of the leadership and primary members of the Islamic State before the city fell into the hands of the regime. Those who were fighting in Deir-ez-Zor were residents of the city and did not have anything but light weapons such as rifles and pistols.”

After regime forces took the city, the ISIS presence receded toward the city’s eastern countryside, specifically the towns of Al-Quriyah, Al-Ashara, Hijin and Albu Kamal, which connects western Iraq and eastern Syria.

Regime forces backed by Russian aircraft have begun to escalate bombardment on Albu Kamal, which could, if it is captured, open the gates to Iraq.

Iraqi militias are hurrying to assist the regime by carrying out an attack on the city of Al-Qaim on the border which faces Albu Kamal, taking the city and its border crossing with Syria, thereby increasing pressure on ISIS by forcing it to fight on both sides.

“Albu Kamal is now targeted by three parties: The regime and its militias, with Russia behind them, and the SDF with the international coalition, in addition to the opposition groups in the Al-Tanf and Al-Zakaf bases backed by the Pentagon,” Mahmoud said.

He added: “The closest of these parties to taking control of Albu Kamal is the regime, and then the opposition parties in the desert area, with the SDF the last of the options.” He said that “the control of any of these three parties is connected to international understandings occurring between Russia and the United States.”

In contrast, the SDF is continuing its attempt to advance in the eastern countryside of Deir-ez-Zor toward Albu Kamal, whereby it has managed to take control over the villages of Jadid Bakkarah and Jadid Ekedat in the area east of the provincial capital. The SDF has also opened a new front in the Al-Shadadi area with the aim of cutting off ISIS' supply route from the Iraqi border.

Civilians fear return amid enormous damage to the city

The humanitarian situation has witnessed a major deterioration in Deir-ez-Zor, with war monitor the Syrian Network for Human Rights reporting the deaths of 687 civilians since the start of the regime’s military campaign on the city and its countryside in mid-August. It also documented the displacement of over a quarter million civilians from the city and its countryside.

After the regime advanced inside the city capturing area after area, the civilians who were blockaded inside were forced to move toward the area of Hawijat Qataa, thereby facing another siege with the regime on one side and the SDF on the other.

According to the head of the Justice for Life Organization, Jalal al-Hamd, “In the last days of the battles with the group, there were about 150 civilians under siege inside the city of Deir-ez-Zor, who headed toward the area of Hawijat Qataa where they tried to cross toward the opposite Euphrates bank, specifically the town of Al-Huseiniya where the SDF was. But they were bombed by aircraft, and after a number of attempts they managed to cross to the town.”

Hamd added: “With the regime imposing control on the city of Deir-ez-Zor, I don’t think that the civilians who left the districts held by the Islamic State will return any time soon. This is because of the enormous damage which the city was subjected to through the heavy bombardment by the regime and Russia, in addition to civilians being afraid of the regime and its militias carrying out reprisals.”