Without access to proper housing, an increasing number of displaced risk sickness — and possibly death — as they brace for the coming cold, Sada al-Sham writes 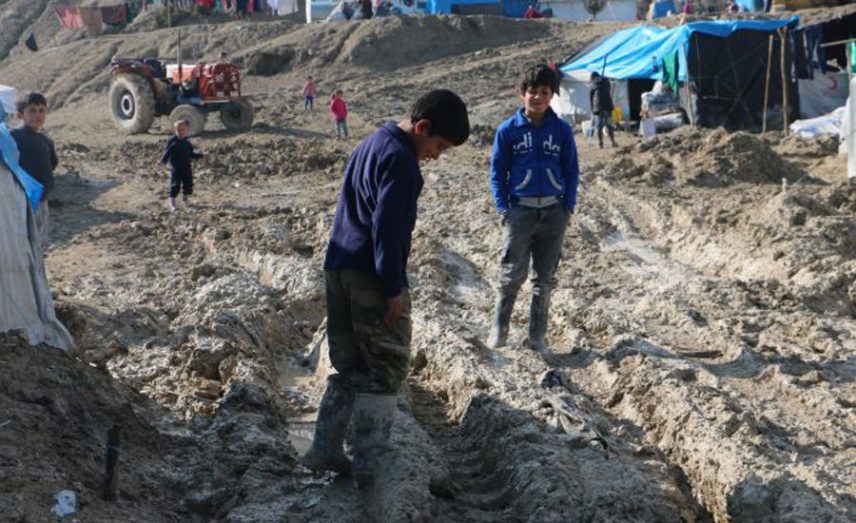 Along the length of Lattakia’s border with Turkey, white, informal tents have spread in the cold mountainous area of the countryside. Along with the approach of winter, inhabitants and their “guests” — some of whom arrived from Deir-ez-Zor, Raqqa and Jisr al-Shughour — endure terrible living conditions with a lack of services and health care.

This year, with the arrival of newly displaced people from disaster areas, the camps have spread widely in the northern countryside of the province. Overcrowding has forced many people to create housing out of fabrics, canvas bags and simple materials in forested areas and among olive trees.

According to Firas al-Omar, an official from the Molham Volunteering Team, more than 13,000 displaced people are housed in more than 46 camps.

The basic problem of these camps, according to the aid officials, is that they are not organized or prepared for habitation, as a number of them set up on mountain slopes, which could become dangerous in the winter. With the start of rainfall, the dirt roads could also turn into mud, which along with flooding could obstruct movement and restrict these displaced people.

Speaking to Sada al-Sham, Omar said that since the start of the Russian intervention and the retreat of residents toward the border, tens of thousands of people have settled in areas not suitable for housing. He said that no local entities or international groups have played a role in improving the conditions, whether through repairing roads, or at least preparing them to protect residents from the collapses which usually happens, and which sever villages from one another.

“These poor people have no one helping them, even though they are only separated by a few meters from Turkish territory, we do not see any local or international groups or any officials from the [opposition] interim government concerned with them,” Omar said.

For some of the displaced, this winter is their first here. These include Abou Khaled, with his family of five, who reached the Lattakia countryside after covering hundreds of kilometers of Deir-ez-Zor and settled in a small tent after failing a number of times to reach Turkish territory. Abou Khaled said that he paid everything he had to reach where he is today, adding that he has nothing but the tent which he made with his hands after he was helped by some local residents.

Abou Khaled explained that his dwelling is not ready to withstand the weather, saying that the harsh environments does not allow him to construct anything else. His children have begun to grow cold since the beginning of September, and they are not used to such conditions, he said. Even more, the family lost their belongings a few days ago after rain water leaked into their tent during the first heavy downpour.

Regarding how he secures his daily needs, Abou Khaled said that “small aid agencies are distributing some food baskets every now and then. But the problem of access to winter fuel is the biggest preoccupation of all residents here, as it has become difficult to obtain amid a major shortage of wood.”

Mohamad al-Asaad, an organizational official with one of the informal camps in the village of Al-Zouf, said that all camps were deprived of proper drinking water and basic services, such as bathrooms. This has led to the spread of diseases among more than 400 families in this area.

Despite the expansion of these camps with the arrival of new numbers daily, and the deterioration of the situation with the spread of some winter diseases, such as colds and bronchitis, no efforts have been made to improve the situation.

For his part, the director of the Civil Defense center in the northern countryside of Lattakia, Mohamad Hajj Asaad, said that the crisis of bad roads and the poor situation of the camps was the result of “the lack of a local council, which should carry out these matters in its area.”

Some of the liberated areas in northern Syria are distinguished by the presence of active local councils communicating with local and foreign organizations and managing and organizing service projects. But this is different in the Lattakia countryside, which has an absence of these councils despite the large number of displaced people living there.

Majdi Zamou, the former secretary of the local council for the town of Akou in the Jabal Akrad area, said that there were many reasons for the lack of a successful council experience in the provincial countryside. No 1., he said, is “the absence of real support contributing to setting up these councils, in addition to the previous lack of agreement between the main local councils and influential municipalities, which led to high competition and conflicts in the decisions.” This, he said, translated into an absence of projects and work on the ground.

Furthermore, Asaad added, residents lost faith in councils as they witnessed independent organizations working alone to provide services. “For a long time, the demands of the displaced people to improve the main road on which cars and trucks cross into the Idleb countryside have increased. After that a foreign group called ACTED paved it, but this road did not last for more than a few months, and then returned to a situation even worse than before because of the poor quality of the asphalt,” Asaad explained.

The extreme weather conditions and floods last year swept away a number of camps in the Lattakia countryside, most prominently the Al-Karama camp, which at the time caused many injuries and material losses among displaced people. In the same area, three children also died last year because of the cold and the spread of lung diseases.