Sada al-Sham reports on Syrian children, born to fathers of unknown origin, who face a complicated process of reintegration after the fall of the 'caliphate' 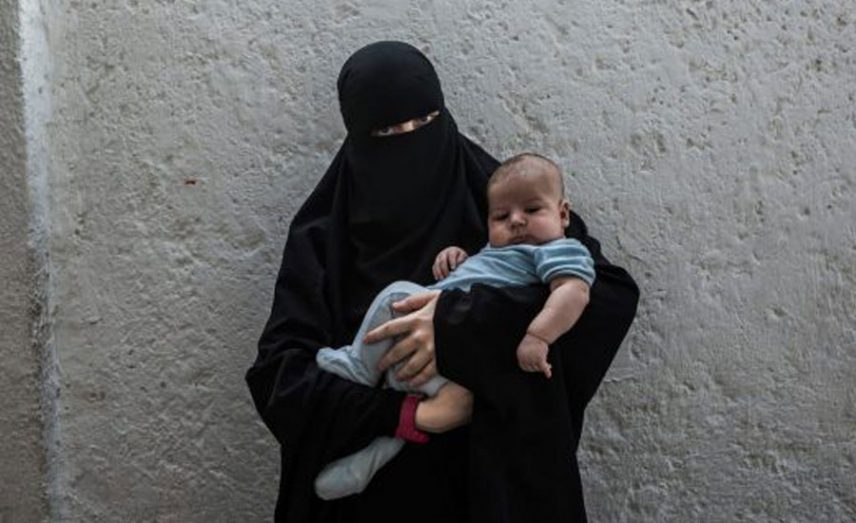 HJ does not know the precise nationality of her husband whom she left in the eastern Deir-ez-Zor countryside at his request. This detail is of little concern to her, as there is another factor which deserves more of HJ’s attention — that today she is mother to an infant who came from the “land of the caliphate.”

HJ’s story, recounted to Sada al-Sham by her relatives, tells of a marriage of a 34-year-old Syrian woman to a foreign fighter from the Islamic State group (ISIS).

Her story began in 2015, when her brother — and breadwinner since her father’s death — joined the group, which forced her to move from the districts of east Aleppo city and reside in the city of Al-Bab in the province’s eastern countryside.

Her brother chose for her a husband from the “brother muhajireen [migrants]” who spoke Turkish, which she was forced to accept, “because he was trustworthy and brave, and pious enough to be a good husband,” as her brother told her.

At the time HJ accepted the marriage, and after a year passed, the noose began to tighten on the group, and so she settled with her husband at the start of 2017 in the city of Al-Mayadeen in the eastern Deir-ez-Zor countryside. Here she gave birth to her first child.

About three months ago, as ISIS faced several heavy blows, and the areas under their control shrunk to an unprecedented degree, her husband informed her that she must return with the infant to her people’s home in the northern Aleppo countryside. Having lost her brother in fighting earlier this year, HJ had no choice but to do as she was asked.

Her relative explained: “Her journey from Deir-ez-Zor to the northern Aleppo countryside took about a month and a half, and she has now settled with her uncle.”

HJ is not the only Syrian woman whose foreign husband left her and disappeared, according to member of the Syrian Islamic Council, Dr. Hassan al-Zaeem.

“There are about 200 displaced women in Idleb on their own, left by their foreign husbands whose real names they did not know, after the organization lost control of the Aleppo city countryside in 2014,” Zaeem said.

In a response, which some see as coming too late, the Syrian Islamic Council issued a fatwa to “forbid the marriage of Syrian women to foreigners of unknown name and origin due to the harm caused by the matter.”

The text of the fatwa, viewed by Sada al-Sham, that “a guardian may not marry a girl to a man who disguises his name and origin because of the resulting harm and social and legal ills, and because of its violations of the aims of Shariah in protecting the honor, ancestry and stability of society.”

The text said that “marriage to one of unknown origin does not void the marriage legally, as the child resulting from it is considered legitimate, however it deprives the woman of her right to know her husband and family, as well as her right to inheritance, and keeps her under his protection, and subjects her to strife upon her husband’s absence and not knowing her husband’s relatives.”

Commenting on the issue, a member of the Syrian Islamic Council secretariat, Sheikh Tajj al-Deen al-Tajji, said that the fatwa came after the registry of numerous cases of Syrian women marrying unknown foreigners.

Despite the legal validity of the marriage contract if the husband of unknown origin is present in person, the council decided to forbid marriages of this type because of the problems this contract entails.

But Tajji acknowledged that “this fatwa does not mean that the previous cases of marriage are invalid, and as these are valid legal contracts.”

What is the fate of the children?

HJ knows, according to her relatives, that an unknown future awaits her infant, the fate of whose father is unknown, like his name and nationality. But these deferred questions do not bother her as much as the details which need urgent answers.

She does not know where to go with her child, who needs care and major expenses before she grows up, her relatives say.

Legal entities, including the Syrian Free Lawyers Association, have warned of the danger and effects of these types of marriages, noting in previous awareness campaigns the impossibility of gaining legal and identity documents for children of these marriages, which will lead to them being deprived of citizenship, education and other rights.