Internal displacement, sectarianism and mass migration have encouraged a shift in the norms of marriage between Syrians, Enab Baladi writes 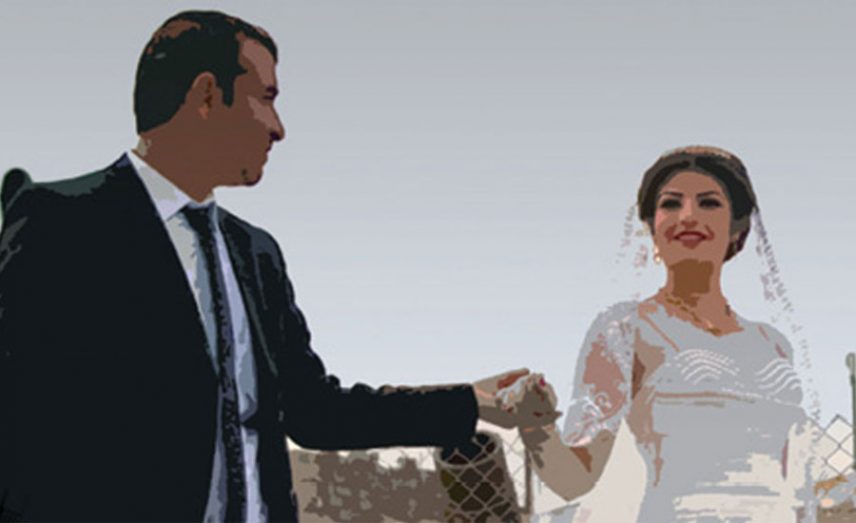 Military control and political struggles are not the only things that have been subject to conflict and disagreement between the Syrian regime and opposition forces over the last years. These disputes have also reflected on the daily lives of civilians and their customs and traditions — and have produced differences that have shaped social lives in patterns subject to the positions of the de facto ruling power.

The displacement that regime areas have seen has had a role in strengthening marriage among religions and sects in light of the mixing that has imposed itself on these areas, with at least 5 million Syrians from various sects and religious doctrines displaced.

In the absence of official statistics around the rates of “mixed” marriages seen over the last few years in Syria, the testimonies of people who have experienced these cases have the biggest role in affirming their existence. However, it is still “unofficial” and may not be outside ordinary limits.

The mixing of cultures among displaced Syrians and host communities has had a role in dissipating the mentality of clinging to customs and traditions, with regard to marriage specifically, and with that it has become possible for society to accept marriage from various areas and countries, and even other religions and sects.

Judge Ibrahim Hussein, a member of the Syrian independent judicial council, said that the law had no relation to strengthening the role of marriage between religions, in that there has been no legislative amendment issued to the Syrian personal status law, either in the regime or the opposition areas.

However, mixing between Syrians of various sects in the areas under regime control has helped strengthen marriage between them, the judge believes.

The number of people displaced to Lattakia and Tartous is about 1.5 million Syrians, most of them coming from the provinces of Aleppo and Idleb, while Suweida has more than 300,000 displaced, most of them from Daraa and the Damascus countryside.

In opposition-controlled areas, it seems that mixed marriages are nearly absent. This is due to the lack of sectarian diversity in these areas as a result of the demographic changes which have affected their composition.

Speaking about Idleb specifically, the biggest Syrian opposition stronghold, which included residents from Sunni, Alawite, Druze and Christian sects, the phenomenon of mixed marriages is almost entirely absent due to the departure of these sects (in exception for Sunnis) from the area.

The groups ruling the opposition areas have not hidden a religious orientation which they have imposed on citizens under their control, a model with a prevailing “undeclared” hostile view of other sects due to political positions.

From the point of view of Hussein, the opposition areas are dominated by a single character “as a result of the war which has bolstered a negative view among the sects and which has included the entire community according to political positions.”

“There has been a split between Muslims and non-Muslims, with the opposition coming to see Christians, Alawites and Shiites as all Assad regime supporters, while the members of these sects have seen Sunnis as their opponents,” he said.

For his part, Sheikh Omar Abdel Rahman from the Idleb countryside said that marriages between sects and religions had vanished in the opposition areas, attributing the matter to reasons that are not very different from those noted by Hussein.

The sheikh told Enab Baladi: “Every sect has begun to close itself off in an indirect manner, and isolate itself from other sects due to the rivalries created by the war in Syria, which has led to social relations being cut off between the sects.”

Meanwhile, opportunities that Syrian refugees have found in countries of refuge, especially European ones, have allowed them to do away with traditions and laws they considered unfair in their mother country. Some have tried to exploit the laws of the “liberated” society which gives priority to respecting personal freedoms above any other consideration.

With the number of Syrian refugees exceeding 5 million, more than 500,000 have settled in the European Union, attempts have increased to integrate in these societies, which free marriage from any pressure and put it under the term “civil marriage,” not religious marriage.

A rights activist for Syrian refugees, Mahmoud al-Shami, said that marriage between religions and sects among Syrian refuges was very easy and available in Europe, where some Syrians no longer refer to the customs of their old society, nor to their religion.

However, he told Enab Baladi that the civil marriage was difficult for some Syrian refugees, who have resorted instead to a contract in one of Europe’s mosques in accordance with instructions of Islam. But it is clear some refugees are oriented toward civil marriage, which allows a man and woman to be married regardless of religion.