Questions remain around how ISIS members have been able to slip undetected through SDF areas, Sada al-Sham writes 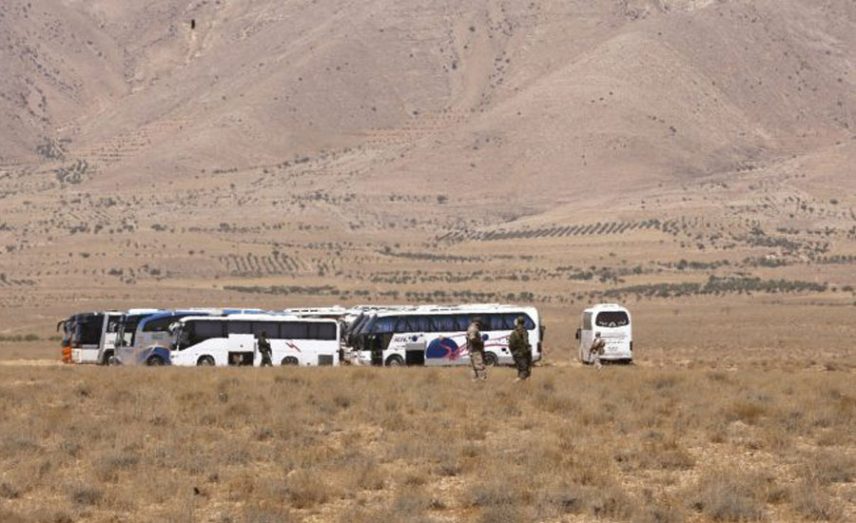 Barely a week has passed without rebel groups in the northeastern countryside of Aleppo, known as Euphrates Shield areas, announcing the arrest of members of the Islamic State (ISIS) group trying to slip disguised into the area, coming from Deir-ez-Zor.

According to a local source, the pace of infiltration attempts has seen a recent increase after ISIS control was reduced to small areas in the eastern countryside of Deir-ez-Zor, distributed between the border with Iraqi territory and the eastern bank of the Euphrates River, as well as a small area west of the river.

Perhaps most surprising is the ability of ISIS members to travel long distances through areas which the Syrian Democratic Forces (SDF) controls, from the east of Deir-ez-Zor to northern Aleppo, undetected.

Major question marks surround the ability of ISIS members to pass SDF areas without being arrested at the checkpoints, which are spread broadly on main routes and at the entrances of cities and town.

Suhaib al-Jaber, a journalist in the Euphrates Post news network, said that “with the war on ISIS nearing its conclusion in Deir-ez-Zor, the group’s movement and its appearance in the areas that have no outlet is planned, and at least is done with the easing from the SDF or the regime.”

He added: “This process was completed in direct collusion with the regime, which controls the area divided between the western Salamiyeh countryside and the eastern Hama countryside.” He said that the aim of the process was to mix up the cards and to use the regime’s hand to justify a military attack on Idleb under the pretext of (an ISIS) presence there after the battle for Deir-ez-Zor ended.

He acknowledged “this is what is occurring now, and the battles there are at their strongest, and the [ISIS] organization controls successive villages and could become a significant force in the Hama countryside.”

In contrast, Jaber did not rule out the possibility of an ISIS sleeper cell there becoming active at any moment, benefiting from the arms sales in the local markets and the weakness of the security agencies.

In this context, media reported that opposition forces on Friday arrested an ISIS cell in the city of Al-Bab in the eastern Aleppo countryside.

The commander, who asked not to be named, said that rebel forces were able to arrest a number of ISIS members, who were arranging entry into Turkish territory through an illegal route.

He said: “They cannot live in these areas and they are known to everyone. They are heading to the area [the Aleppo countryside] with the aim of fleeing toward Europe because they believe that they can live there hidden from view, thinking that no one knows their history.”

According to the commander, the international intelligence agencies know the names of the ISIS members, pointing to the penetration of this group by the intelligence community since its formation.

He added, mockingly: “They are stupid and naive, and were exposed to the trap the first time when they joined the group, and the second time when they fled to the European countryside, because they are headed to prison by their own will.”

The commander’s statements also raised questions about how they passed to the opposition areas and their arrival to the Turkish border. He said: “As they succeeded in crossing SDF controlled areas by paying bribes, whether to individuals or SDF leaders, they are trying the same thing in our areas.”

Journalist Abdel Rizak al-Nabhan said that the penetration of opposition areas was “extremely easy” as long as there is an abundance of smugglers in the area. But the difficulty lay, according to Nabhan, in crossing the Turkish-Syrian border via smuggling, with the Turkish side strengthening security procedures on its border. “To overcome this obstacle, the [ISIS] organization’s leaders follow an alternative smuggling route to enter into Turkish territory different from those that are known.”

According to the journalist, “There are routes for smuggling that cannot be taken by civilians because they are very expensive and not available to everyone. They cost thousands of dollars per person and usually this money ends up in the pockets of corrupt smugglers and fighters in the rebel groups as well.”