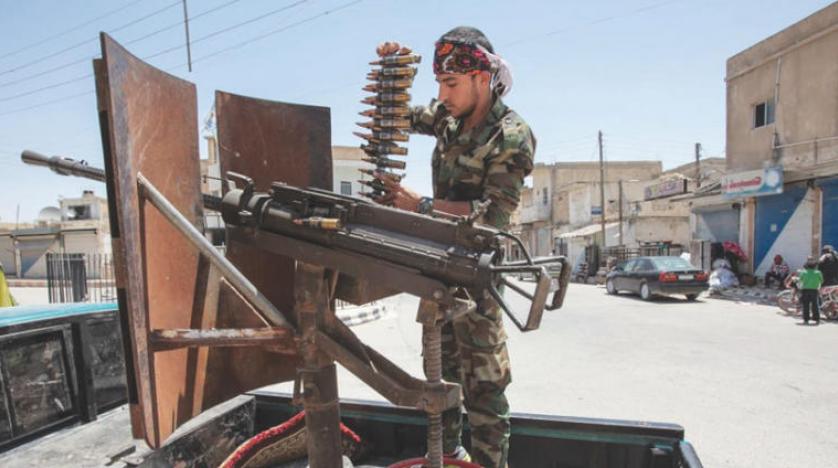 A commander of the Kurdish People’s Protection Units (YPG), Sabban Hamou, was informed by Russian military officials during his visit to Moscow that the Kurdish Self-Administration will be invited to the “Syrian National Dialogue” conference in Sochi, which will establish “a federalist Syria in a gradual manner.” This comes at a time when Hamou was “relieved” by the statements of the American Secretary of Defense James Mattis that Washington will defend the Kurdish-Arab Syrian Democratic Forces against any attack by Syrian government forces with “encouragement” from Iran.

However, for Hamou, the stage after the defeat of the Islamic State (ISIS) in east Syria is to transition from “military victories” into “political recognition” from the countries of the U.S.-led international coalition on one side and from Russia on the other.

Hamou visited Moscow over recent days at the invitation of the Russian Defense Ministry to participate in celebrations of the victory over ISIS with the attendance of Defense Minister Sergey Shoygu and Chief of General Staff Valery Gerasimov. Hamou then held work sessions with officials in the Defense Ministry and the surveillance apparatus in the Russian army around the Astana process and the Syrian dialogue conference expected in Sochi.

What did Hamou hear from the Russians?

According to information obtained by Asharq al-Awsat, the Russian generals tasked with organizing the negotiations in Astana and Sochi confirmed that the Self-Administration of northern Syria will be invited to the Sochi conference, which will likely stir anger from Ankara as it objects to the attendance of any party close to the YPG or the Kurdish Democratic Union Party.

The sources said that the Russians are “carrying out tactical cooperation with Turkey to make Sochi a success, and therefore they will not give official invitations to the Kurdish YPG but they will invite the Self-Administration,” which was declared in northern Syria and was included within what is known as the “federation of northern Syria” and includes all ethnic communities and aims to provide a “model for future Syria based on geographic federalism and not on communities,” whereby elections have been arranged with Russian and American observers.

According to Hamou, Moscow has determined its vision for the dialogue in Sochi whereby it will launch a process to formulate a new Syrian constitution. This will be completed through the formation of a constitutional council from members of Syrian parties studying the text of the constitution which was prepared by the Russians at the start of last year. The Russian text primarily stipulated the dissolution of powers of the president to the prime minister and formation of an “association of regions” from local administrations, in addition to the national parliament.

The Russian generals told the YPG commander that they were in agreement that the model of the Russian Federation was good for Syria “but gradually and through patience and negotiation,” noting that Damascus sees the Russian model as “inappropriate because Russia is a very large area and includes ethnicities and religions unlike Syria, which is small with intertwined religions and sects.” One of the Russian generals said: “The solution in Syria is federalist, but the issue needs time, and there must be agreement from the new government in Damascus for this after the drafting of the new constitution.”

U.S. Secretary of Defense James Mattis said days ago that “there is currently a demarcation line” between areas controlled by United States allies in eastern Syria and those under the control of government forces backed by Russia in the west, adding: “It’s a mistake to cross this line.”

In parallel with strengthening relations with Moscow, the YPG is continuing to receive American aid, as it received additional shipments of weapons and military equipment two days ago in accordance with an executive decree signed by U.S. President Donald Trump midway through last month. The aid package allotted about $400 million to arm the Syrian Democratic Forces as their role shifts from fighting ISIS to maintaining the territory they control. A Kurdish commander said yesterday: “We have a clear military program to raise the number of our forces from 25,000 to 30,000 with a clear change in their role to become an official army.”

Asked about the nature of the American role in Syria in the coming year, Mattis said: “You will see more diplomats on the ground,” adding that the U.S. forces will move from controlling territory to securing stability with soldiers ensuring the movement and security of American diplomats. At the same time, the YPG commanders expect Washington to shift its role from military to political dimensions. A Kurdish commander said yesterday: “We want Washington to reveal its political vision for our area and the new political system in Syria. We want political recognition of the area controlled by the Syrian Democratic Forces, that is the Syrian federalist system.”

Assad regime forces control 55 percent of Syria after achieving major advances against rebel groups and ISIS since the direct Russian military intervention at the end of 2015, while the SDF controls 28 percent.

Washington’s support to the SDF has deepened the rift with Ankara, which fears the establishment of a Kurdish entity in northern Syria near its southern borders. This has led to a narrowing of the gap between Ankara and Moscow around the Syrian crisis to implement United Nations Resolution 2254, which stipulates the unity of Syrian territory. The Turkish army is hurrying to begin a military operation in Afrin in northern Aleppo, where the Russian army established a center after including Idleb into the de-escalation zone agreements. However, the past few days saw an attack by Russian forces on the lines between the provinces of Hama and Idleb coinciding with an escalation of Ankara’s tone against Sochi and Assad.