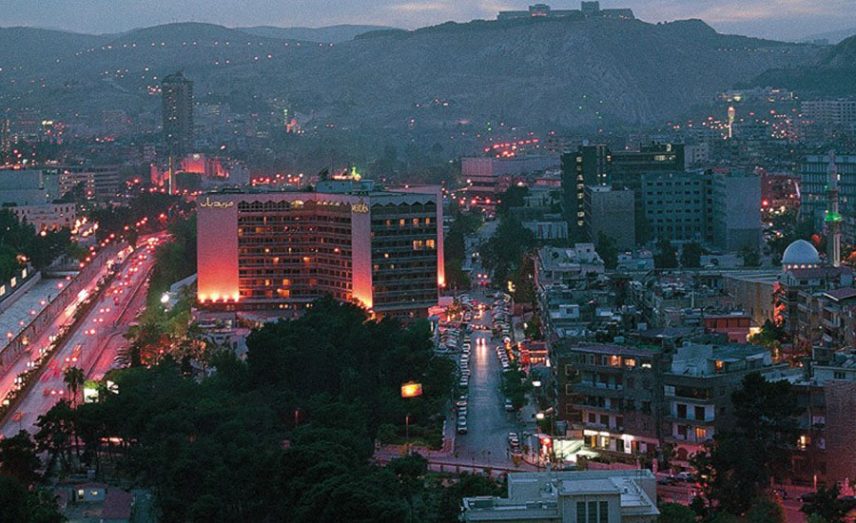 Sitting in one of the market’s corners, with small garments in her lap, she watches the faces of passersby, her glances sometimes meeting theirs. But she is in a different place, and begins speaking unintelligibly with imaginary people, and then reacts and laughs, and then turns away.

Munira became sick, and no one knows how it happened. It seems that her sister Sanaa is busy with her own tragedies, as she has lost her husband and young daughter. Today she works in a beauty salon for women, and complains sometimes of the pain in her arms from inflammation of the nerves, which hinders the work she relies on to withstand what she has endured. Munira’s younger sister escorts her to the corner alongside the salon to sit and reflect in the warmth of the sun.

Sanaa did not see her husband killed; she does not believe it happened. Years after her displacement from her home in Adra, she still hopes he is alive, even though someone informed her that he saw his head severed and lying on the side of the road. Later the tragedy continued with her loss of her small daughter when she was hit in the head by shrapnel during the bombing of the Duweila district. “We were too late. I held her in my arms and ran to the hospital, but I was too late. She died in my arms on the way,” Sanaa remembers.

She wipes away her tears: “For months I felt her warm blood on my hands.” Sanaa received psychological treatment for so-called post-traumatic stress, which occurs after one undergoes a position which threatens his or her life or a loved one, and a personal preview of death, whereby the patient is controlled by severe fear and tends toward isolation, suffering from nightmares and sleep depravation, troubled by painful memories and cases of agitation.

It has become difficult to find a family or even individual in Syria who has not, in recent years, undergone a painful incident or lost a loved one. Everyone is living in a stage of mourning and as soon as he or she comes out they go back in.

Shadi was a young man in his 20s in the regime army in Deir-ez-Zor when the Islamic State (ISIS) entered. He saw a childhood friend have his neck cut and slaughtered. Shadi hid in panic and did not utter a word for fear of his life. He swallowed his breath and curled into himself, leaving his friend to die alone. He returned to his family traumatized from the visions he saw — and he was lucky just to return to his family, which months later lost its oldest son in a car bomb in Jaramana.

Shadi was spared death once again, but he did not escape the scent of his brother, while he lived, or the sounds of his screams which filled his ears at night and stopped him from sleeping. The family later thought of sending their son saved from death to Brazil, because his psychological treatment, if completed, is not likely to withstand a third confrontation.

Selma is still searching for her husband, the father of her three children, who became mentally ill as a result of imprisonment after he passed in front of a checkpoint at Aisha River. “They dumped him from the car in the street, and he didn’t know who or where he was, but the neighbors knew him and brought him to the house. We couldn’t figure out anything from him and we weren’t able to bring him to the doctor,” she said. On the third day after his return, he left the house and did not come back. “We’d only just celebrated his return and people were congratulating him on his safety when he disappeared.” She is still searching for her husband hoping he will come home one day.

There are no precise statistics on the cases of post-traumatic stress disorder in light of the raging war, in a community in which some segments still look on mental illnesses as a secondary issue with a stigma attached. To the observer, it appears that the situation goes beyond obvious and diagnosed cases, as depression, despair and feelings of helplessness dominate young people and keep them from their achievements. It is not possible to observe or measure the psychological effects on the youngest segment which is growing up in these conditions of deprivation, anxiety and fear, which we will not have to wait long until its disastrous effects become clear on society’s structure. However, it has been notable recently that a culture of psychological treatment and analysis among young people, who have begun to seriously seek solutions for their psychological crises, accepting and encouraging treatment, and viewing it as necessary.