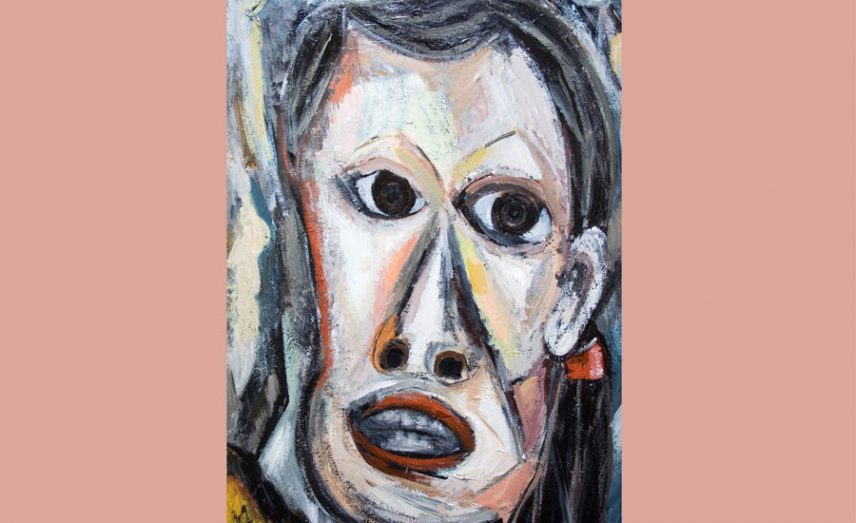 A popular story goes: A knight far away from his country was informed that his wife was afflicted by smallpox, which had scarred her body and face. He cried throughout the night until he lost his sight, and was then led by his companions to his home, to continue his life under the care of his wife.

However, Ghafran’s husband was not stricken by blindness, and perhaps he did not cry, when his home was bombed in one of the villages of the eastern Aleppo countryside a year ago. Ghafran suffered burns to her entire body except her face. Her husband crossed with her over the Syrian-Turkish border in an ambulance, waited some time, and when it was confirmed that Ghafran’s body would not be restored, he told her “I can no longer look at you,” and disappeared.

The story of Ghafran, war and isolation

Ghafran searched for her husband by all means she could, but there was no news of him. With the scarcity of relatives and information, she gradually lost hope of reaching him. On the other side of the border, Ghafran’s mother took charge of the rest of the family, taking the four children, and crossed with them into Turkey with a smuggler to join her daughter.

On the outskirts of a luxurious city, Ghafran lives in a barn with her four children, which is closed off without windows. The humidity and smell of the mold among the stones suffocates them. She wears clothes to cover her entire body so as not to frighten her children at the sight of the burns and scars, and she does not remove her veil except when she sleeps. With only one water tap, the room becomes a dwelling, a kitchen and a bathroom.

Hadeel, a friend of Ghafran’s, visits her regularly and tries to help her as much as possible. She describes her case cautiously, keeping away the media's curiosity: “Ghafran’s mother pays the rent on the stable, the water and electricity bills, and living expenses out of what she earns in home service, and she tries as much as possible to motivate her daughter to continue on with life. But Ghafran refuses to respond, and is involved with herself and speaks only of treatment for her body and displacement, offering her children minimal words, with a tear in her eye the rest of the time.”

Ghafran’s mother, who has taken charge of everything, even going to NGOs and agencies, appears unusually hard in supporting her daughter. She spoke with the heart of a loving grandmother of the children: “They have gotten used to not going out and instead playing inside the barn.”

The grandmother continues: “Safaa, who is 8 years old, walks on her toes because of chronic ulcers on her feet. She is scared of her mother when she takes her clothes off, and sees nightmares that make her urinate involuntarily.

“Reem, who is 6 years old, has a face and body covered in warts because of the terror which she felt when they bombed her home in the village. There is no school for the two children and no hospital because they were unable to obtain the temporary protection card,” she explains.

Hadeel, the friend, says: “The ceiling is ratty and full of holes,” adding: “One time a pigeon came down through a small hole in the roof, and while I was talking with Ghafran, it leapt from its place and starting making noise. We found out Safaa had fed it bulgar, which had been the day’s food. With a roof like this, and two blankets for sleeping, Ghafran and her family are waiting for winter.”

Since the incident, Ghafran persevered in trying to treat her body, but every time she failed she tried to commit suicide. She struck her head on a mirror once, and cut her veins another time. She stopped eating a third time, and when she realized there was no treatment that would restore her to how she was, she turned inward on herself and her children, and is no longer interested in what happens outside the barn, going out with her mother only when necessary.

Recently life returned to her eyes when a university hospital in Ankara gave her treatment. A doctor told her that the treatment would be enough for some of the deep burns, but that her body would not return to normal because that would take cosmetic operations which were very expensive, which struck her with a fit of anger.

The doctor tried to calm her, and called a psychologist to hep, but she kicked him out and screamed: “I’m not crazy. Give me the cosmetic operation and I’ll be fine.” She removed the hijab and revealed her chest: “Will I stay my whole life like this?”

Her mother felt helpless before her daughter, who had lost faith. She called on Hadeel to help try and improve the situation of the family as a whole. This may have helped a little, and after Safaa and Reem entered school, Ghafran calmed down, and began to speak with Hadeel again. When the time was right, Hadeel asked about her insistence on restoring her body after her husband had left her and disappeared. She responded: “I’m a 23-year-old woman and my body was burned. Maybe he will come back if he hears I’ve recovered.”

The time of the knight has ended, as the story continues that the knight’s wife died after several years, for the folk to discover that he had not been blind, but that he had claimed this in order not to look at his wife in a way that might cause her embarrassment or hurt.

Ghafran is bereaved and uninterested in such tales and stories, and is trying to give her husband a chance to return. But the most pressing question is: What if he does not?