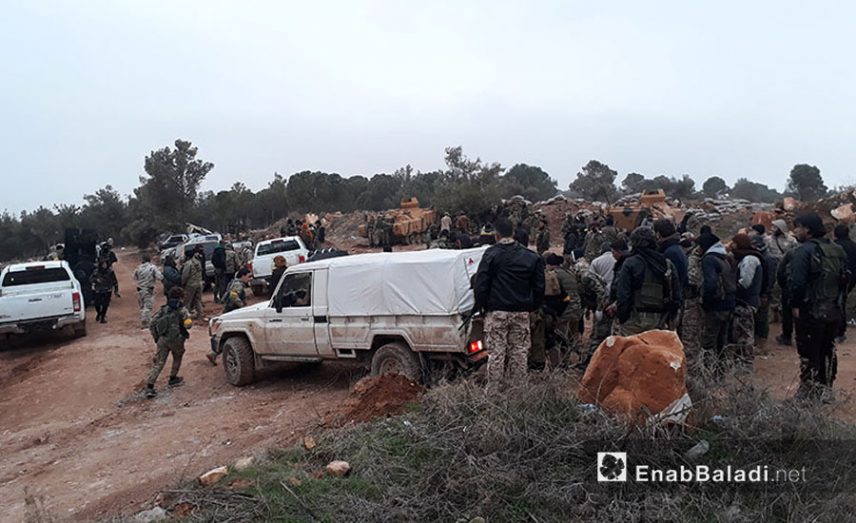 The Turkish military operation in Afrin has entered into its second week, and despite the lack of major results on the ground by the Free Syrian Army, the Kurdish People’s Protection Units (YPG) have been put before two choices: hand over the area entirely to the Syrian regime or face Turkish determination to continue the battle with the backing of a number of international forces.

Political and military developments over the last few days were manifested in Russian-American support for Turkey in its operation — an unexpected turn for the Kurdish forces, which depended on the American backer as a spearhead to defend it in various circumstances. Instead, the Kurdish forces were met by a 10-pronged military attack through which the Turkish army and FSA are trying to tighten the noose as a first step similar to those in the Euphrates Shield seen previously.

The YPG officially announced that the Russians had failed it and prevented President Bashar al-Assad’s forces from advancing to confront the FSA and Turkish army in the area.

Against the backdrop of these developments, the YPG, which considers the Turkish operation an “occupation,” addressed the Syrian regime and invited it to enter the area to repulse the attack. This occurred after the announcement of the arrival of reinforcements from the eastern area passing through areas under its control in the eastern Aleppo countryside.

Will the regime enter Afrin?

In a statement last Thursday, the Self-Administration in Afrin, which holds authority over the YPG there, said: “We invite the Syrian state to carry out its sovereign duty toward Afrin and to protect its borders with Turkey from attacks by the Turkish occupier.”

It added: “The [state] has not yet carried out its duty despite announcing it officially and deploying its forces to secure the border of the Afrin area.”

There had previously been discussion about handing over the area to the Syrian regime days before the beginning of the military operation. At the time, analysts based this on the area being open to other regime-controlled areas, in addition to the YPG refusing to allow Turks to enter and the Kurdish preference for the regime given hostilities with Turkey going back decades.

So far, Afrin is facing a military future, either with a decisive decision from the Turks to enter deep into the area or through allowing the Syrian regime to take control of it through an agreement with Kurdish forces.

According to Turkish political analyst Mahmood Osman, the idea of handing Afrin to the Syrian regime is “exceptionally Iranian,” through which Iran is trying to impede Turkish progress. He says that with the Syrian issue approaching a political solution, the countries are trying to draw areas of influence in Syria.

He told Enab Baladi that the Turks had taken measures for such a possibility, as Turkey couldn’t enter into a military operation only for another regional party to come and pull the rug out from under it.

The military operation on the ground is proceeding slowly, and according to the plan, the Turkish army is trying to surround the area to pressure the YPG and then get them to leave the area through a deal or through surrender.

Osman compared the current Turkish operation to previous battles in the Euphrates Shield operation, including “the same long-term style of draining the opponent rather than any swift advance.”

He noted that the operation to “clean Afrin,” as he put it, was a Turkish strategic imperative that Turkey considers an emergency situation and not an aim.

In a previous interview, military analyst Col. Khaled al-Mutlaq said that Turkey or others would not enter into Afrin, but would surround it and pressure the YPG to withdraw from it through a deal that might include handing over areas to FSA control.

Mutlaq told Enab Baladi that the final outcome of the Afrin operation would be to connect the Euphrates Shield areas with the Idleb and Aleppo countryside, adding that the battle in short would be to cut off all supply routes from Afrin.

Three FSA military sources told Enab Baladi that the groups had prepared to begin a battle toward the city amid military preparations currently underway.

According to the analyst Osman, the YPG will try to stand to the last moment in Afrin in order to trade it for Manbij, and this is what it will work toward on the ground.

He said that “Afrin was finished for all parties after the green light was given by international forces, but Manbij is still subject to dispute, as the Turks have not gained agreement from all players.”

FSA commander Mustafa Abou Haidar said that reports which the YPG has circulated about handing over Afrin to the Syrian regime are “just for the media,” as it is allied with more than one international party in dispute with the Syrian regime.

He said that the YPG will not leave the area easily and without fighting, and the current conditions indicate a “powerful and grinding” battle expected by the FSA and behind them Turkey in the coming days.