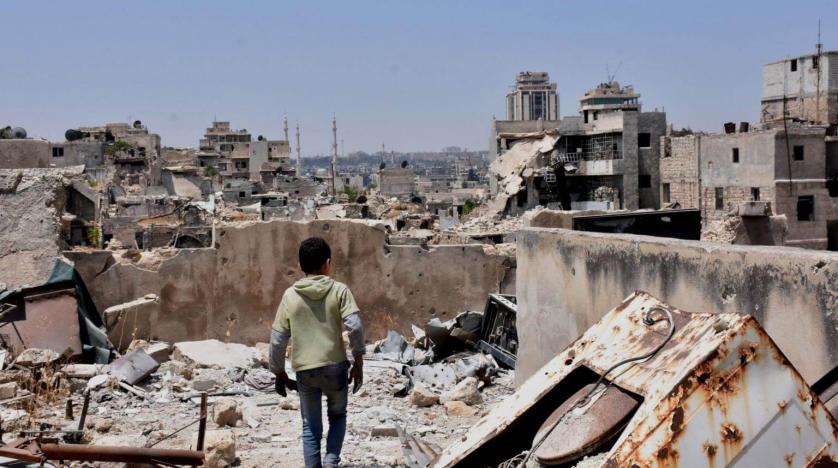 A United Nations document has tied its institutions' participation in Syria’s reconstruction to a "serious and comprehensive political transition,” stressing the need for the international body's employees to adhere to this issue and not to cooperate in Syria with those “involved in war crimes.”

The document, which was obtained by Asharq al-Awsat, emerged after reports of alleged flexibility at the U.N. office in Damascus in dealing with Syrian figures and entities, in addition to projecting willingness to participate in “development” as an alternative to “reconstruction.” This is in addition to United Nations officials in Syria carrying out visits to regional countries to encourage NGOs to work in Damascus and coordinate with it.

However, the two-page document, which was prepared by the United Nations in New York, sets explicit conditions for the work of U.N. institutions, stating that it will only facilitate reconstruction when a serious, comprehensive and negotiated (between government and opposition representatives) political transition occurs.

Under the headline “Criteria and principles of United Nations assistance in Syria,” the document stressed the need for the compliance of U.N. entities active in Syria, with criteria aiming to ensure support and assistance is provided to those in need across Syria in a way that is in harmony with the principles of the United Nations Charter and related U.N. Security Council resolutions.

The document said that the humanitarian needs in Syria are "very urgent" and offering assistance through the most direct routes is of "utmost importance.” It stressed the need for humanitarian principles of "neutrality, impartiality and independence" to be applied to life-saving humanitarian needs, while guaranteeing “non-opposition and interference" in its operations with a view to continuing actions envisaged in the humanitarian response plan.

According to U.N. statistics, out of about 22 million Syrians, 13.8 million people are in “dire need of assistance,” 5.5 million are registered in United Nations refugee agency’s offices in neighboring countries, and 6.1 million have been displaced inside the country.

The document said the response plan will commit to the humanitarian line with the aim of securing the U.N.’s ability to implement basic activities concerned with saving lives and ensuring the provision of basic needs for residents there. “With regards to development and reconstruction, this must be included on agendas or in different frameworks that naturally necessitate longer negotiations with the concerned governments. This is necessary considering the complex legal and political issues involved,” it added.

There are still some areas under siege by Syrian government forces, including the Damascus Ghouta, which includes 400,000 civilians and has been subjected to heavy bombardment in recent days. The document said that early recovery efforts must be provided in Syria as described in the humanitarian response plan, adding that it would be an opportunity to move on a track beyond emergency life-saving efforts to provide minimum humanitarian living conditions for impacted communities. Russian-Turkish efforts far from the humanitarian working group in Geneva have succeeded in evacuating wounded and sick from the Damascus Ghouta, which should be included in the de-escalation agreements between the Syrian regime and rebel groups with Russian guarantees and Egyptian oversight.

The document explained that only when a serious, comprehensive political transition negotiated between the concerned parties occurs will the U.N. be ready to facilitate reconstruction, urging U.N. staff to “comply with the principles of neutrality, impartiality and independence,” and take into account the basic principles of a human rights-based programming approach, including participation, empowerment, local ownership and sustainability.

Following complaints from NGOs about U.N. offices in Damascus working with Syrian figures or according to government priorities, the document stressed that priority must be given to assistance based on the urgent needs of residents (instead of government-directed needs) with special focus on the needs of vulnerable groups and individuals, in a way that provides protection for human rights. It added: “This aid must be provided in a fair, just, non-politicized and non-discriminatory manner.”

It also stressed that the U.N. must pay particular attention to human rights and the implications of protecting them, particularly with regard to how and where to provide assistance. “U.N. assistance should not go to serve parties who are alleged to have committed war crimes or crimes against humanity,” it said, stressing that U.N. aid must be determined in a conscious and frank manner without prejudice to the aims of accountability for serious violations of human rights, as well as the aims of a fair, sustainable and legitimate political settlement.

The United Nations has called for an immediate cease-fire in Syria for at least a month for humanitarian reasons after reports of dozens killed in air raids on the Damascus Ghouta. U.N. war crimes experts said that they were investigating several reports of strikes using chlorine gas against civilians in Saraqeb in Idleb and Douma in the Ghouta.

Moscow has pressured Western countries to contribute to the reconstruction of Syria, which is estimated to cost $230 billion. The statement from the Syrian National Dialogue Congress, which was signed under Iranian-Turkish-Russian sponsorship in Sochi at the end of last month, called for lifting the unilaterally imposed sanctions on Syria, which will lead to solving the humanitarian and economic problems and contribute to the country’s reconstruction, without linking it to a “political transition.”

In contrast, Washington and four of its Western and regional allies drafted a document last month stressing their readiness to assist in Syria’s reconstruction only after a serious, comprehensive and material political transition, following U.N.-supervised negotiations between the relevant parties, and when a neutral environment is established allowing for the political transition.