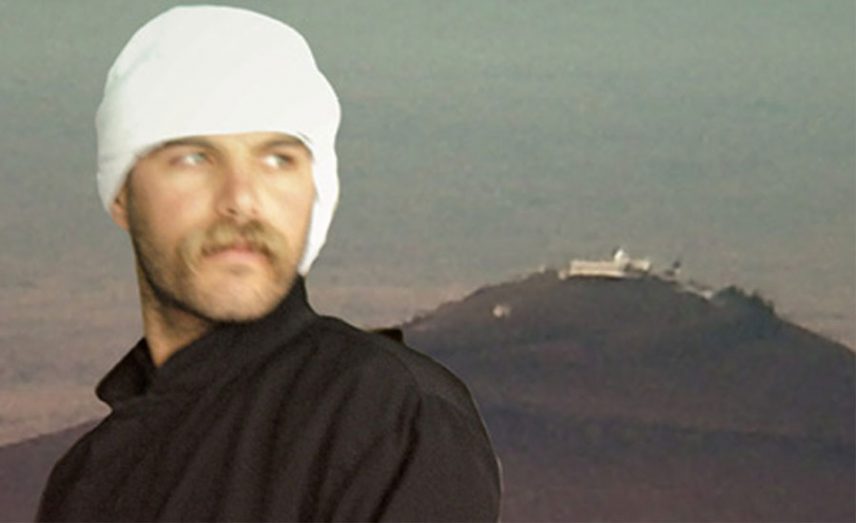 The demonstrations calling for freedom were not foreign to Suweida. One day in 2011, its residents went out in protests and roamed the city streets, confirming they stood alongside their neighbors in Daraa and the rest of the Syrian cities.

Suweida was involved in the protests early, with a sit-in by the lawyers’ union on March 28, and a spectrum of intellectuals coming out in protests in April of the same year.

After months of peaceful mobilization, the Syrian regime pursued a policy in “Jabal al-Arab” of limiting the intervention of its authorities in crushing the mobilization and providing space for the shabeeha and local militias to take on the task.

Abou Rayan al-Maaroufi, an activist who works at the Suweida 24 Network, said that the turning point in the province’s history came in 2013 after the entry of the Free Syrian Army into the area led by the defected lieutenant Khaldoun Zeineddin. Battles broke out for a number of days, resulting in the death of Zeineddin and 20 fighters from Daraa and Suweida, as well as dozens of deaths among President Bashar al-Assad’s forces.

The regime media machine at the time said that the battle was led by “terrorists,” Chechens and foreigners, according to Abou Rayan, and the regime’s story was a factor in frightening residents and forcing a segment of opposition members to leave the town out of fear of arrest. At the time, Suweida saw unprecedented security tensions accompany the stagnation of peaceful activity in the rest of the province.

The province was ruled under a tight security and military grip after the appointment of a general in Assad’s forces, Wafiq Nasser, as head of military intelligence of the southern area. This coincided with the start of anti-regime protests, with Suweida afterward becoming known as “Nasser’s kingdom.”

At the end of 2017, the Syrian regime issued security decrees, including transferring Nasser out of Suweida with the post being taken up by the “infamous” Gen. Louay al-Ali. Ali had been head of the military security branch in Daraa when the revolution broke out and was responsible for arrests and torture.

Suweida before 2011, like any other province in Syria, was ruled by an alliance between the existing authorities and traditional leaders.

The influence of the Al-Aql Sheikhs (spiritual leaders) was large and they enjoyed strong relations with the security branches. But the balance of power laid with the security agencies, according to local journalist Karim Mansour.

After the revolution broke out, Syrians, began breaking taboos. A large number of young people, compared with other Druze areas in Syria, participated in the revolutionary mobilization, which the religious authorities stood against, according to Mansour.

The situation remained the same until the appearance of the “Men of Dignity” movement, which took place between 2013 and 2014. The movement promoted slogans among people claiming to be neutral, and adopted a principle of non-violence against the province’s population. This movement imposed a fait accompli in the province by force of arms.

Mansour says that all parties in Suweida responded to the fait accompli out of fear of the specter of war, and circulated speech adopting calls for national unity while denying the demands of some residents to secede for independence. However, what distinguished this period was the rejection of “compulsory service” while also allowing those who wanted to fight alongside one of the parties of the conflict to leave the province, which pushed a number of people to join this movement.

Here the Syrian regime began to attempt to destabilize the situation in Suweida by supporting people operating outside the rule of law, such as those who carried out smuggling, kidnapping and other criminal violations. The regime also activated a smuggling line through the desert to transport goods such as fuel, weapons and drugs, between Suweida and Daraa, with those responsible cooperating with the security authorities.

Because basic goods in Suweida were imported from Damascus, the capital was able to impose high duties through checkpoints throughout the province. Checkpoints allowed trucks carrying goods to pass with their protection against kidnapping after paying the fee. If drivers refused, then a group would be waiting just dozens of meters away. This led to a decline in the living situation in Suweida and inflation of prices.

The phenomenon of kidnapping civilians is one of the most dangerous of the violations which have spread in southern Syria between the neighboring provinces of Daraa and Suweida. Kidnapping is described by residents as organized and open, with its social, moral and economic consequences beginning to threaten peace in the province. According to activists from the province, about 406 civilians were kidnapped during 2017, while other statistics indicate that about 23 civilians from the two provinces were kidnapped in January 2018 alone.

Since January 2017 until the end of August that year, there were no fewer than 300 kidnapping incidents, according to a report published by the Syrians for Truth and Justice group under the title “Abduction as a Mechanism to Disintegrate the Community Fabric.”

Investments have disappeared from the province and job opportunities receded in 2011, while its young people were split between fleeing or volunteering in the (pro-Assad) National Defense militias, resembling Lattakia province where poverty has pushed many to join the Popular Committees militias and security forces in order to secure a livelihood.

With the protection and knowledge of security forces and Assad’s officers, the black market oil and fuel trade thrives within the province, which is a connecting point between areas under the control of the Islamic State (ISIS) group in the desert and the eastern region to the opposition areas in Daraa.