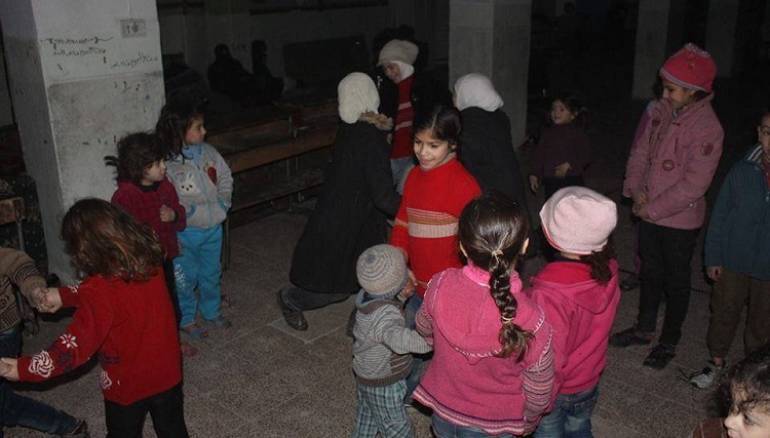 The local council in the besieged enclave of Arbeen, eastern Damascus, has formed an emergency committee to provide technical and health services to displaced civilians living in basements, after the district has endured months of systematic bombing of residential neighborhoods.

Abou al-Yosr Baraa, head of the council’s media office, said that the work aims to equip 40 of the 75 basements with basic maintenance, as well as providing health care provisions, clean water and sanitation services.

He added that 17 of the basements are uninhabitable as they lack the minimum necessities to sustain life. Currently, some basements are cramped with up to 25 families at the same time. The majority of these dwellings are lacking heating sources.

“The committee [council] seeks to provide services for all residents and displaced people present in Arbeen,” Baraa said.

He continued indicating that the main problem facing the council is the continued bombardment of residential neighborhoods by regime and Russian warplanes using various types of weapons. He said that the recent military campaign against the city has left dozens of dead and wounded, and has significantly destroyed infrastructure and public and private facilities.

Despite 2,500 families being forcefully displaced from their neighborhoods to other areas within the city, another 1,400 families remain behind, unable to flee due to the lack of suitable alternative housing. These families have been forced to live in basements to increase their chances of surviving the bombing, but they still face continued dangers as the regime and Russian forces use highly destructive thermobaric (vacuum) missiles.

Additionally, living long periods of time in poorly ventilated and unequipped basements poses a severe and serious risks to health, as disease can spread due to high humidity, overcrowding and lack of sanitation. Children, women and the elderly are those mainly affected.

Hassan Younis, the chairman of the local council, indicated that the current health situation of the families living in the basements is very bad. He added that some volunteer medical teams are trying to make periodic trips to the shelters to assess the health of residents and the suitability of housing, as well as monitoring patients and providing them with medicine.

Speaking with Zaman al-Wasl, Younis said that the medical teams recorded the spread of many diseases among families living in basements, including respiratory and chest problems, asthma, scabies and lice, diabetes, and blood pressure problems.

The regime’s military campaign on Arbeen city commenced in the last days of 2017 and has resulted in the destruction of seven civilian neighborhoods and 30 percent of homes.