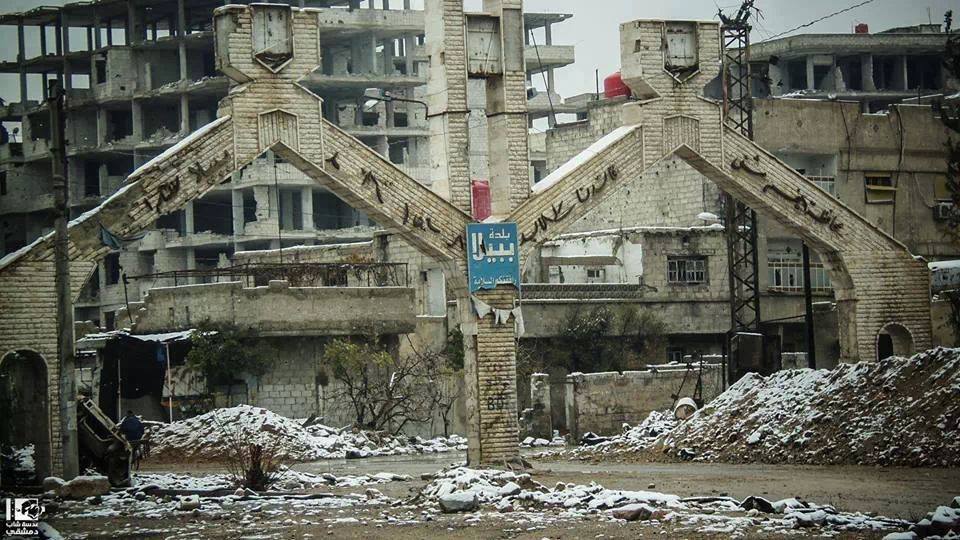 After the Assad regime failed to impose a displacement project in the besieged area south of Damascus, as it had done in the areas of Qadisiya, Al-Hema, Al-Mouadamiyah, Al-Qaboun and Daraya, it moved on to evacuating young men in exchange for large sums of money.

The regime opened a safe passage via the intelligence agencies through which more than 250 young men have left so far, including fighters from the Islamic State (ISIS) organization and the Free Syrian Army, as well as civilians.

Control over the area of south Damascus is divided between the Ajnad al-Sham group in the Al-Madaniya district of the Al-Qadam area; ISIS in the districts of Al-Hajar al-Aswid, Al-Tadamon, Al-Asali and the Yarmouk camp; and the FSA in the towns of Yelda, Babila and Beit Sahem, in which displaced people from the surrounding areas live, especially Palestinian refugees from Yarmouk camp. Fighters of the Hay'at Tahrir al-Sham group control very small parts west of Yarmouk camp.

The first evacuation operation from the area under ISIS’ control began two months ago to the southern province of Daraa, with those leaving falling into the grips of the FSA, most prominently Salah Qateesh, known as the group’s executioner.

After Qateesh was executed in Daraa following a trial, ISIS’ fighters changed their destination to the north, with the group of travelers headed by Massaoud al-Khabouri – a relative of Hisham al-Khabouri, a former ISIS emir – along with his brother and eight men.

The journey began from the groves of Al-Hajjar al-Aswid, and then to Maamal Baradi, which is under regime control. The group confiscated the property of any fighters who deserted and distributed them other fighters, apparently in order to control the situation and to spread fear among those who wanted to leave. However, despite that, the group's problems with desertion continued intensively, and included second-rank commanders.

Similar to the open road supplied for ISIS fighters to exit, the regime opened a route for rebel groups in the towns of Yelda, Babila and Beit Sahem, after local negotiations failed with the regime's security branches in the capital Damascus, most recently at the start of last year.

Although the groups had implicitly decided not to allow anyone to exit except those who were above the age of 40 for medical treatment, they were not able to issue a real position on exiting or not.

One of the young men who reached Turkish territory told Ayn al-Madina details of the evacuation operation, which began with a group from the town of Babila, who bypassed the barricades and reached the Al-Rohanji hall in the town of Sidi Meqdad, where regime security forces awaited them.

From there, a convoy composed of four security vehicles and a van holding 15 people headed directly to the Qalaat al-Madaiq area in the western Hama countryside, which was divided between the regime forces and the FSA, and where the first access point was.

From there they were handed over to a smuggler who secured for them a place to stay for several days in the town of Darkoush on the border, awaiting the smuggling route to Turkey, and then from there they crossed the border on foot, with their journey ending in Antakya.

According to the young man who reached Turkish territory, the convoy was not hindered by anyone on its way, and the first task of the security vehicles was to facilitate passage through the checkpoints.

According to the extraction agreement, a payment of $4,000 was deposited with a relative in Turkey, and at the first point half the amount was transferred to a money transfer mafia in the black market, and the transfer notice was sent to the convoy's head, Col. Ahmed al-Rashidat, previously a commander in the FSA before he returned to the regime in 2013. When they reached the Qalaat al-Madaiq side, the rest was paid in the same way.

The regime tallies the exit deals as a profitable operation at a lower cost than the operations of forced displacement and demographic change which it carried out over the last two years, according to research by the Azar Studies Center's Anwar al-Qasimi.

Qasimi believes that the exit of the young men has had dangerous effects, which will affect the area in terms of the absence of important revolutionary cadres, such as workers in the civil field, doctors, aid workers and administrators, or even from the military field.

“Because the area has been under siege for years, what it has lost cannot be replaced, while the partial changes which have occurred continuously will lead to changes in the overall situation,” he said.