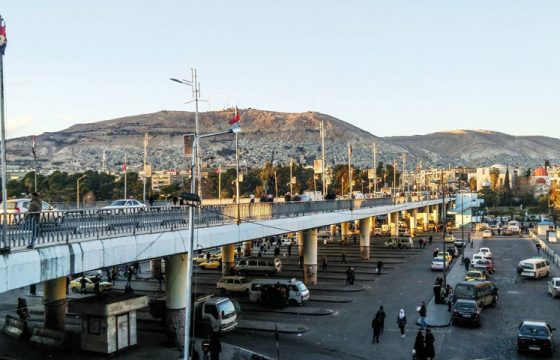 The few kilometers that separate Damascus from its Eastern Ghouta are not capable of delivering to the ears of most of the capital’s residents the screams of more than 350,000 civilians under siege for years. In the shells that fall on them, the regime finds a means of bolstering the social divisions between the two shores of Damascus.

Since the first day of the military operations led by the Syrian regime in the Ghouta, social media has not been free of images and video clips showing scenes which do not disguise the volume of the tragedy which has afflicted this geographical spot.

The stories and clips emerging counter the images of the capital's residents that are propagated in official and loyalist media in an attempt to give legitimacy to the air and ground campaign, which use rhetoric in a way that serves the regime's agenda by framing the its stance as decisiveness to rid Damascus from terrorists.

Surveys of opinion, video clips and correspondents on the ground, in addition to various media networks, have all presented events in favor of the regime, which has exploited the conditions of some Damascus residents affected by shelling, as well as showing the participation of some of the capital's residents in storming the Ghouta.

The sensitivity of the position and the residential composition of Damascus and its countryside requires major official and unofficial media mobilization to achieve part of the “victory,” in addition to the military operations on the ground.

The term “decisiveness” was repeated by a group of women who Al-Akhbariya al-Souriya's correspondent met with and who were relatives of people wounded by shelling. The video clip in which three women appeared was published by the channel on Feb. 23, with one of them saying, as she stood alongside a wounded child, “God will not forgive them. The army and the president needs to wipe them out. Enough is enough.”

Rebel groups in the Ghouta and the Syrian regime have traded accusations for years about who is responsible for the bombardment of the capital with mortars, which have killed dozens of civilians.

The regime has exploited the situation in Damascus as a “tragedy,” ignoring the deaths of more than 560 civilians as a result of the bombardment of cities and towns of the Ghouta over just eight days.

The official story around the Eastern Ghouta operation has been supported by loyalist media with video interviews, one of which with the National Defense Forces militia was broadcast in February and focused on three fighters, one of them from Damascus, another from the eastern area, while a third was apparently from the Ghouta, based on his accent.

The fighters justified the military operation and their participation in it as “ending the oppression of the people of Damascus and ridding them of the mortar fire.”

Official media has gone farther than before, using scenes from a video recording from a film's makeup studio in the Palestinian city of Gaza, claiming it showed actors in the Eastern Ghouta fabricating scenes of death and wounding in the area.

It has also circulated Russia’s story about opening humanitarian corridors, accusing rebels of blocking the exit of civilians, which was denied by the Ghouta's rebel groups speaking to Enab Baladi, who said that they were in the context of “forcible displacement.”

This coincided with an opinion survey published by Sham FM, a loyalist media, under the title “If you have a free room in the house, are you ready to receive a family from the Eastern Ghouta fleeing the militants?” – all of those who spoke to the correspondent said they were ready to do so.

For about two months before the start of the recent operation on the Ghouta, regime media has consistently claimed that rebel groups in the enclave have chemical weapons and that they were determined to use them against civilians.

This was intended to distance the regime from doubts or accusations in case chemical weapons were used, as has happened in a number of incidents which have taken on international dimensions, most recently in Khan Sheikhoun in the Idleb countryside in April 2017.

The Al-Akhbariyeh al-Souriyeh official channel published two surveys on its Facebook page, the first on Feb. 22, asking, “Do you think that the White Helmet organization, which was founded by British intelligence in 2013, will carry out a new chemical attack in the Eastern Ghouta?” with 68 percent of respondents saying yes.

Another survey on March 1 asked, “Do you think that the use by terrorists and the White Helmets of chemical weapons against civilians in the Ghouta was useful for their handlers in the West to exploit politically and in the media in accusing the Syrian state?” The rate of agreement was 74 percent 17 hours after it was published, however it is out of the question that the result is real since the channel’s viewers are mostly regime loyalists.

Since the foundation of the Syrian Civil Defense in 2013 in areas outside regime control — a group called the “White Helmets” — the regime has worked to demonize the group given the international sympathy and support it has received, as it is primarily a neutral organization working for civilians affected by bombing, as has been shown by hundreds of video clips.