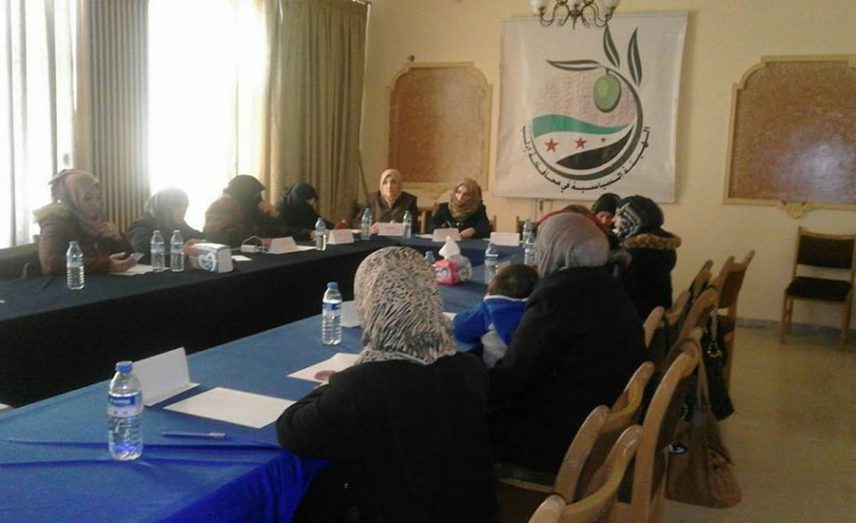 During its first constitutive period, the Political Commission in Idleb did not have any female members. However, the new trend among members of the Commission to accept and encourage the participation of women in it, and belief in the importance of the women’s participation in political life made them work to fix the deficiency.

For the first time, women have entered the Commission and taken part in the first half-annual meeting. This step was followed by the establishment of the women's bureau. Women's presence has not been limited to this bureau, however.

Commission Chairman Atef Zureik told Zeitoun that women have the same rights as men in the organization. "They have the right to run for the Commission chair, and maybe the next chairperson will be a woman.”

Another leading member in the Commission explained how women's involvement began.

"We agreed on the importance of the presence of women in the Commission and their participation with us in political field,” said Ghanem Khalil, director of the public relations office.

“We invited the women who have been active in the governorate. At the first semi-annual meeting women entered the executive office. There were two opinions at the time: one to limit the women role to women's affairs, while the other opinion called for not limiting the role of women to one office but keep it open," Khalil added.

For her part, the director of the women's bureau Hasna Tmarou believes that life and politics are inseparable. “If we consider politics to be the management or art of the possible, political action is not something new. In the first session, our presence as women in the Commission was without elections. In the second round, I ran and was elected to the women's office, which was created at the first semi-annual meeting.”

She added that the director of the financial office was a woman who was elected as well.

The director of the women and children's office in Jabal al-Zawiya, Fatima al-Hajji, believes that the political Commission must rely on quality rather than quantity and select people who are capable of political work to succeed and benefit society.

“Politics,” she said, “needs depth and strategic dimension, culture and knowledge, as well as permanent follow-up, because it determines the fate of a country."

Director of the center for women and child welfare in Ihssem, Najah Sarhan, expressed to Zeitoun her opinion on the Political Commission and the political work in Idleb governorate. "All the political bodies and groups that emerged in the governorate have not been effective enough. We know that politics is mere talk, but it needs to create change on the ground, and all these bodies, including the Political Commission, have not changed anything on the ground, and are still under construction and development, and must seek to develop themselves corresponding with reality."