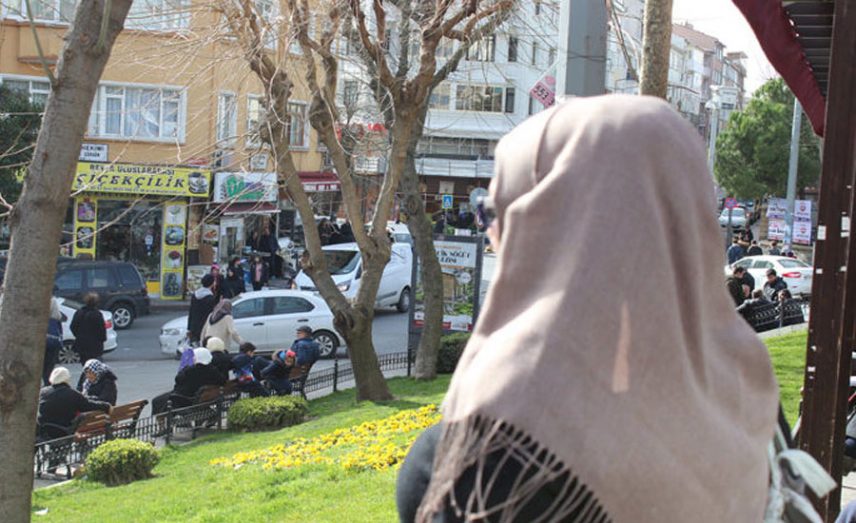 The garden square in the Al-Fatih Mosque in Istanbul is where her story began. Umm Abdullah, like many Syrians, settled in this area immediately after arriving in the city. The garden square was a chance for Syrians to meet and get to know each other.

Umm Abdullah says: “I was waiting for the dawn prayer with my friend in the Al-Fatih Mosque garden when I heard a voice calling the name Abdullah. I looked closer and saw a group of young men sitting near me, and it seemed that they had arrived recently from Syria. Some of them were talking about riding over the sea to Europe, but most of them needed someone to help them and take their hand in these conditions.”

She added: “After I spoke with them, I found out there were two young men with the name Abdullah among them, which is the name of my imprisoned son. I decided then to help them for the sake of my son’s memory, and when I told them that, they welcomed the idea immediately.”

Umm Abdullah was married when she was 13 years old and lived with her husband’s family for more than 20 years, during which time she was deprived of her most basic rights.

She was subjected to harsh treatment and repeated violence, but she breathed her freedom when she decided to divorce after her sons grew up and became able to live on their own.

After her divorce, she proceeded to look for work and to build a new life. From her husband she received a house where she lived with her three children.

She said: “I took control of my decisions, I was not going back to the past.”

In 2011, Umm Abdullah supported the revolutionary mobilization in her district and gave assistance to the protesters and hid them in her house with her sons, which led to them being arrested twice. Her oldest son, Abdullah, was arrested and his fate is still unknown.

After they got out of prison the second time at the start of 2013, life became more difficult, especially given that their house was near the front lines of the conflict. She decided to leave the country to protect her second son from being forcibly conscripted and her daughter who was getting close to marriage age.

She arrived with her daughter and elderly mother to Turkey to find herself faced with a new world, which forced her to bear bigger responsibilities. However, Umm Abdullah saw no harm in that at the time. She was ready to bear hard work and the hardships of migration in order to prove she was able to establish her life and own her decisions.

She says: “I do not have a craft, but I am in good health, I believe in myself, and I bet on the love of others.”

Doing good for others to do good

In the Al-Fatih Mosque squares, Umm Abdullah found a ray of happiness in helping the young men. She wanted to do good for others for the sake of her missing son.

She says: “After that day, I started to take care of them. I cleaned the house where they were living and prepared them food. I went with them to areas they didn’t know. It was as if I was their mother and they were my sons.”

She adds: “I was eager to create a family atmosphere with them, and so I brought my mother with me once, and she was surprised when she heard one of them calling, ‘mama’ and the second ‘aunt.’ My mother cried loudly then.”

One day, one of the young men called her asking for help for a relative, to accompany his wife to the hospital and help her as she gave birth. Umm Abdullah hurried to help the family. The husband asked her to stay with his wife and then stay with her in the house until she recovered from the birth.

She says: “The woman and her husband treated me like a mother, and I told them that I was helping them so that God would prepare to one day help my son, but they insisted on giving some money for me to stay in the house with them. Ali, the husband, recommended I make this a service to support myself.”

Days later, a woman called her and told her that she had taken her number from the family she had helped with the birth and she asked her to help her in childbirth, and so after a short time she was known among most Syrian women in Istanbul who went to her to accompany them during the difficult childbirth period, and started to call her Umm Zaki among themselves.

Umm Abdullah gained the love and trust of the Syrian families who knew her and offered services to young women who wished to marry and prepared homes for the occasions, and obtained items for the weddings.

She says: “This then turned into work, and I felt that something came of my hope in myself and increased my strength and confidence further.”

Umm Abdullah still lacks a house for herself and moves on the days when she does not have births or is staying with ill among the houses of her children and siblings.

Umm Abdullah dreams of establishing her own project and working with young Syrian men and women without giving up doing good for others as the basis, principle and desire.

She says: “I will not stop doing good for all those who come to me, and this is what strengthens my hope for the future.”