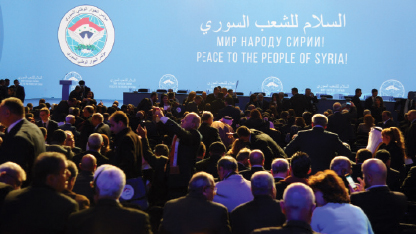 A diplomatic source told Al-Watan that the major victory achieved in the Eastern Ghouta would have consequences of the same magnitude for the political negotiations, adding that the outcomes of the Sochi conference would be the solution to the Syrian political crisis.

The source, who lives in Damascus and asked not to be named, said that the Sochi statement, which was voted upon by broad segments of the Syrian people, is what will ensure a political solution in Syria.

It stipulates the formation of a committee to discuss the amendment of the current constitution, with a third from the Syrian state, and a third from the domestic and foreign opposition who attended the Sochi conference.

The source said that this committee would be formed exclusively from legal professionals and politicians, revealing information indicating that the United Nations envoy Staffan de Mistura was in a dilemma after the victory of the Syrian army in the Ghouta, and was no longer able to impose the instructions of the Western powers who support him on Damascus and Moscow, and that his role will be limited in the talks to coordinating and facilitating the discussions between the parties without any personal intervention – and that this is what his role should have been from the start, based on the mission assigned to him.

After the success of the Sochi conference, the delegation of the so-called High Negotiations Committee tried through de Mistura to obtain seats in the constitutional reform committee, but the U.N. envoy acknowledged the difficulty of the issue at the current time, waiting for developments from the Eastern Ghouta.

The source told Al-Watan: “Since the start of the military operation, which forced the terrorists to leave the Ghouta and acknowledge defeat, the High Negotiations Committee delegation has begun pleading with Western capitals to maintain its political role at the very least.”

The High Negotiations Committee delegation had boycotted the National Dialogue conference in Sochi and worked to derail it and to distort it under the instructions of their handlers in Riyadh and in cooperation with de Mistura.

The source who spoke to Al-Watan expected that the political process would resume after the next summit, which will bring together the Russian, Iranian and Turkish presidents, Vladimir Putin, Hassan Rouhani and Recep Tayyip Erdogan, in mid-April, with a committee to reform the constitution being formed at the start of May.

The committee would commence its work in Damascus at a later date to be agreed upon, and this is in accordance with a non-negotiable Syrian decision that any Syrian constitutional reform committee must meet and formulate their ideas in Damascus and not in any other capital.

The source predicted that de Mistura would not venture to form a committee on his own, because this would threaten his political future, especially after he received a clear message from Damascus that he was not authorized to form any committee related to the reform of the Syrian constitution and overriding Sochi’s outcomes.

The message created confusion about the future of the Geneva track, which de Mistura had been betting on creating a new constitution for Syria, which took into account the interests of hostile states, and Riyadh’s opposition is testament to the resolve of the Syrian people.