Idleb has never seen such a large influx of people 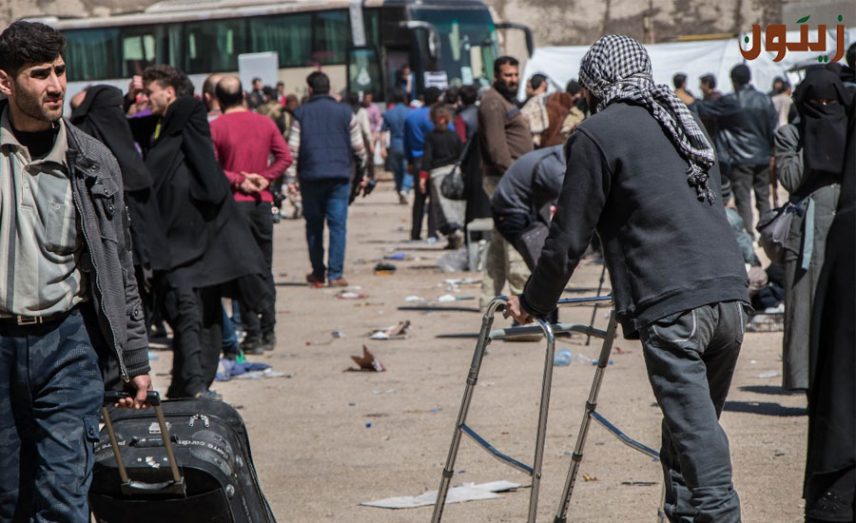 They stood on the outskirts of their cities in the Ghouta and gave a final goodbye look at the ruins of their homes, carrying what they could of their necessities and some clothes on what remained of their bodies drained by hunger, thirst and fear.

They left behind them the memories of their revolution and became displaced against their will, crossing the paths of death under the swords of the enemy and the gloating whips lashing at their pride.

‘We Did Not Come Out Willingly’

Umm Mohamed, a displaced person from the town of Zamalka to the city of Idleb told Zeitoun: “We left the Ghouta in a difficult period and we did not come out willingly. We were forced out and we did not have another choice. We saw our children and our men under the rubble with our own eyes. We spent days in cellars, and children died from the humidity and from hunger, hoping only for a drink of water.”

She adds: “We felt humiliated in the hours we waited for the buses before they arrived, thinking about when we would return as we passed through a convoy protected by Russian forces, who promised to secure our necessities. However, they did not give us anything but a bottle of water and a little bread. All of this, in the cold weather and the heavy rain – the children were suffering.”

After Arriving in Idleb… Where Will Eastern Ghouta’s Displaced Go?

Unlike previous displacements to Idleb province, the eastern Ghouta’s displaced did not find any shelter centers. The large number of residents who were displaced from the Ghouta and the speed of implementing the expulsion agreement did not permit civil actors and organizations to sufficiently prepare to receive the displaced.

In addition to that, the displaced from the Damascus al-Qadam district had arrived days earlier to the province, as well as the unprecedented displacement campaign from the cities and towns of the Hama and Idleb countrysides, which distributed residents over more than 80 locations in Idleb province, against the backdrop to ongoing fighting east of the railroad line.

The province has not previously seen a displacement of this volume.

Previous expulsions and recent displacements led to a high concentration of people in the cities of towns of Idleb, as well as a crisis in securing houses for those who were previously residents of the eastern Ghouta — so how will it be after the expulsion of thousands of residents?

Especially given that a heavy and systematic bombardment campaign had struck the province a short time earlier and destroyed houses and facilities.

So far, 33,482 displaced people have reached Idleb province, according to the Response Coordinators in Northern Syria — which is the number before the arrival of the most recent two convoys of displaced from the central sector of the eastern Ghouta. The number is expected to reach 40,000 displaced.

The method of distributing the Ghouta’s displaced depends on residents receiving them at the zero point of Qalaat al-Mudaiq in the Hamah countryside, with response coordinators, in coordination with NGOs, then assisting in the process of transporting the displaced to temporary shelter centers and providing food and medical items after searching for places to send the convoys by dividing them into batches after coordinating with the shelter centers and civil bodies which have prepared places to receive them.

Some may imagine that shelter centers are camps well-prepared for residents, but as media activist Moaz al-Abbas told Zeitoun: “Shelter centers are a group of large tents known as ‘hangers’ that are allocated, some for men and others for women, where displaced people gather temporarily until they find places to live, and are then transferred there.”

Displaced of the Damascus al-Qadam district reached Idleb days before the arrival of displaced from Harasta, the first expulsion agreement in the eastern Ghouta. A total of 6,555 displaced people were secured in the Sa’ed and Miznaz shelter centers before beginning to secure and rent houses.

Spokesman for the local council in Maarat Nouman said in a statement issued on March 30 that residents were standing alongside their displaced brothers and offering a helping hand and sharing their money and houses with them.

The local council of the city of Ariha expressed its readiness to repair partially damaged uninhabited houses on the condition that the homeowners shelter a forcibly displaced family from the the eastern Ghouta in a house which was renovated for a period no less than a year earlier, in a statement issued on March 27.

The local council in Saraqeb city on the 27th of the same month called on residents to register the houses, medical centers and open stores or cellars or farms they had with the emergency room in the services offices of the council, given the urgent need to shelter displaced from the Ghouta.