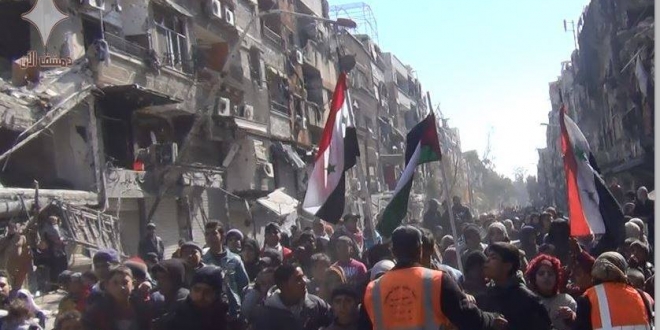 Southern Damascus is back to the media forefront again after reports that it will be the Syrian army's next target after the liberation of the Ghouta, east of of the capital.

Southern Damascus is divided into two areas, the first including the Islamic State (ISIS) and the Nusra Front in Yarmouk camp, Al-Hajar al-Aswad and Al-Kadam. The jihadist groups are in constant battle with the Syrian army. The second area includes the towns of Yelda, Babila and Saham. These are under the authority of the Free Syrian Army and are under a truce with the Syrian army.

The head of the National Defense forces in southern Damascus, Fadi Saqr, told Damascus Now that the Syrian army and its allied forces are concerned with protecting the areas of Yelda, Babila, Beit Saham and the citizens there because they are subject to a cease-fire agreement and a truce with the government. The agreement's provisions will be implemented and the armed fighters who do not want the reconciliation can leave to other areas under armed groups' control, after ISIS and Nusra are dealt with.

Saqr added that reinforcements from the Syrian army and allied forces will soon be deployed to the borders of the areas under the control of ISIS and Nusra to start an expanded military action to end the terrorist presence in southern Damascus.