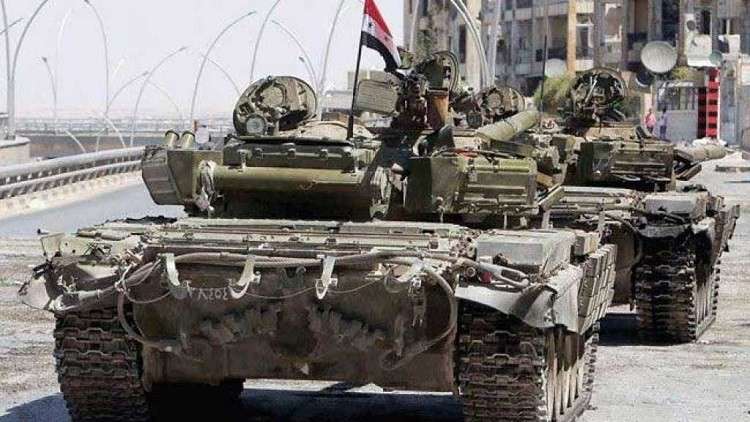 The districts of southern Damascus are preparing for an expected military escalation, with the Bashar al-Assad regime and its allies beginning a military mobilization to take control over these districts, some of which are under the control of the Islamic State (ISIS) organization and Hay'at Tahrir al-Sham, after ISIS ambushed Assad's forces in eastern Syria and killed dozens.

It is expected that the Yarmouk camp will see the regime’s first military mobilizations south of the capital. The regime's loyalist Al-Watan newspaper said on Thursday that the government had given ISIS fighters 48 hours to agree to leave the camp and the Al-Hajar al-Aswad district and parts of the Al-Qadam and Al-Tadamon districts.

The newspaper reported that according to information it had obtained, if the group’s fighters refuse to leave the area then Assad’s forces and the militias supporting it will carry out a military operation to end the group’s presence and restore control over them.

The pro-regime newspapers published on social media images of tanks and military vehicles, saying that the military reinforcements were headed toward southern Damascus in preparation for an assault on the areas outside regime control.

After imposing its full control on the Eastern Ghouta near Damascus, the regime is trying a to finish securing the capital and to achieve that the regime is mobilizing on two fronts, the first in the southern districts of Damascus and the second in Eastern Qalamoun, which has seen negotiations to decide the area’s fate.

The Rabeea Thowra (Revolution Spring) website said, in monitoring the developments in the southern Damascus districts, that the Assad regime with Russian support “is preparing to start a full battle against the Yarmouk camps and Al-Hajjar al-Aswan areas, and the two areas of Al-Asali and Al-Madaniya in the Al-Qadam district, and south of the Al-Tadamon district.”

The website said that after taking control over the Eastern Ghouta the regime had sent major reinforcements to the southern Damascus environs, which included tanks, BMP vehicles and heavy machine guns, as well as missile launchers.

It added that there were “major mobilizations of fighters deployed on the outskirts of the Yarmouk camp, Al-Wadam, Al-Tadamon and the towns of Sabina and Hajira in the southern Damascus countryside.”

Syrian opposition groups had taken control of the towns of Babila and Beit Sahem and the Russians and representatives from the Assad regime have continued their negotiations with these groups, most prominently Jaish al-Islam, Hay'at Tahrir al-Sham and the Sham al-Rasoul and Jaish al-Ababil groups, in order to reach a deal similar to those which had been reached in the Damascus countryside and which have provided for heavy weapons to be turned over and those who wish to remain staying and those who do not want to being expelled to northern Syria.

ISIS took control of the Al-Hajar al-Aswad area after it expelled Jabhat Fatah al-Sham fighters, while the group’s fighters also took control of major areas of the Yarmouk camp and the Al-Tadamon district.

Reports from local sources indicate there are about 100,000 civilians living in the southern Damascus districts and there are fears that the regime carrying out a military operation could lead to a massacre, as occurred in other areas which saw a major assault by the regime, which has pursued a “scorched earth” policy in dealing with the areas outside its control.