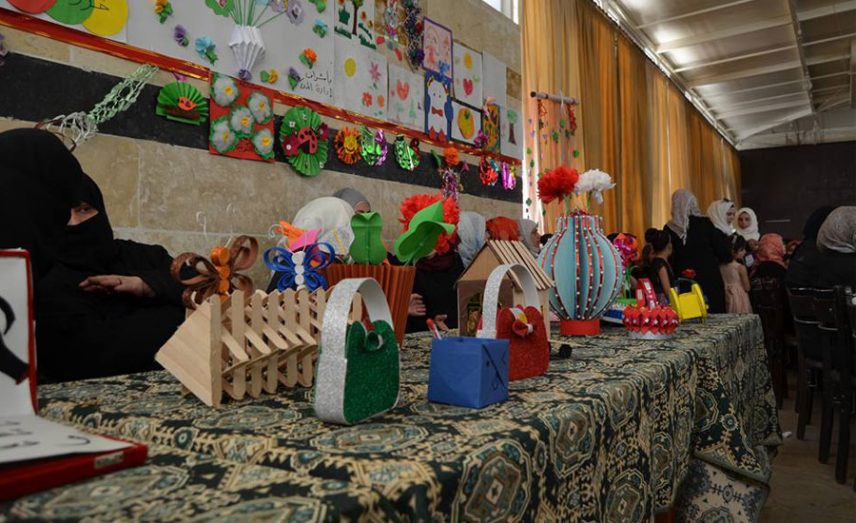 The Children of Syria association, in cooperation with a Sawad Watan team, on Thursday held a charity art fair for children with special needs in Idleb city with the aim of further integrating them into society and keeping them away from the atmosphere of war.

Zeitoun’s correspondent said that the fair, which had the title “I Want to Be,” was held in the family club in Idleb city, with a number of organizations working in the city in attendance.

The fair included children’s drawings and simple shapes made from paper, as well as dancing by children who participated and entertainment activities for them.

The head of the executive office for the Children of Syria group Mohamad al-Qabji told Zeitoun: “The 'I Want to Be' fair was established with the aim of getting children with special needs out of isolation and integrating them into society and encouraging them to participate in the activities. The preparation stage including buying colored stationery, paper and cardboard, and then we invited a number of organizations and psychological support and special needs centers in Idleb and its countryside.”

The assistant director of the Sawad Watan team, Fadi al-Nayef, told Zeitoun: “We in the Sawad Watan team, in cooperation with the Children of Syria group, were aiming for a forgotten segment of our society, which is those with special needs. We did this by setting up a charity fair for them, and we trained the children for two weeks in their schools: The School of Human Care, the Deaf and Mute School, and the School for the Blind.”

Nayef added: “The fair was set up to get children with special needs out of the atmosphere of war and to increase their capabilities, which have been neglected, especially in light of the wartime conditions."

Nayef thanked the Swiss Association and the Fadi Ali paints company for giving support for the fair.