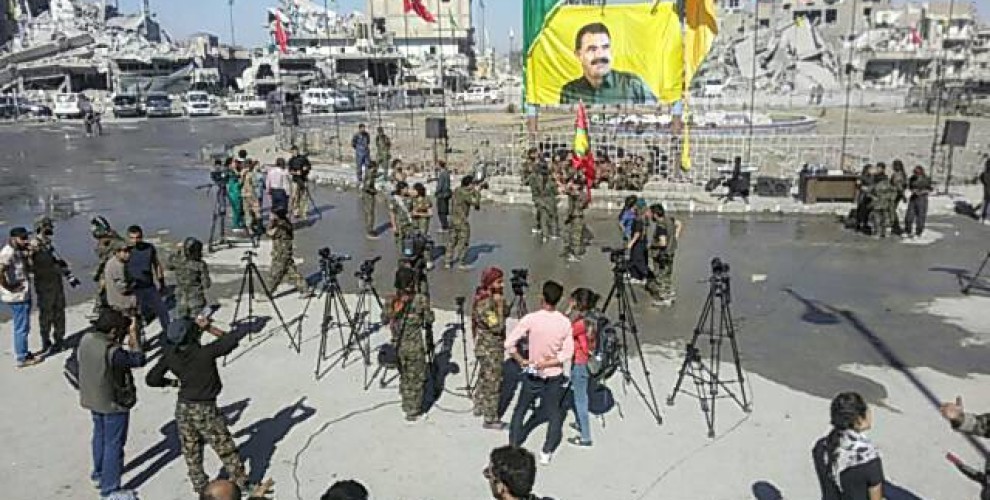 Raqqa, which served as the “capital” for Islamic State (ISIS) and was its biggest stronghold, has been absent from the scene to some extent since the Syrian Democratic Forces took control over it six months ago – except for some reports which always talk about civilian victims killed by mines and explosives left from bombardment and fighting, as well as many acts of theft.

The city has not yet recovered. Houses are destroyed and the streets are overflowing with rubble, while life is returning very slowly because of the weakness and restrictions made by the SDF,” says Hazem, a resident of the city, who said he felt let down after the whole world abandoned the city and its people. All the promises of the SDF to rebuild the city have been a “disappointment.”

Many mines left by the coalition, as well as those planted by ISIS before it withdrew from the city, have claimed 300 civilian lives and severely wounded hundreds of others, including cases that have required amputation.

Some victims have been killed by cluster bombs, while about 80 percent have been hit by landmines planted by ISIS. About a third of these cases end in death before the victims reach a medical facility to treat the wound, according to one of the doctors at the Raqqa hospital.

Requests by residents to the SDF to increase the pace of mine clearing have done no good, nor have the calls to hold those who have been derelict in this responsibility to account and to open a neutral investigation around the reasons for the delay, which has pushed residents to “pay sums of up to $600 to mine-clearing teams to inspect a house or store,” Hazem says.

He added that those who are spared the mines must face the gangs of kidnappers and thieves who have filled the city without any action from the SDF.

“Organized gangs” are managing the kidnapping of civilians in order to demand ransoms in exchange. There have also been organized looting operations by commanders and fighters in the SDF that have affected even medical equipment from private clinics that were spared the bombing, despite the city’s need for them.

The looting gangs have gone from looting pharmacies, stores and medicine storehouses, and stealing cars of all types, to looting civilian homes in their entirety, according to Hazem, who said that the stolen goods were gathered in SDF houses east of Raqqa city in preparation to move them to markets in the areas they control in the Hassakeh countryside and east of Aleppo.

Apart from the looting in Raqqa city, the SDF is still imposing taxes on the residents coming from nearby displacement camps, despite the total lack of services and basic living needs in the city, in addition to preventing the residents from returning to restore their destroyed houses until after they pay a “reconstruction tax,” while they have threatened — according to the Raqqa is Being Slaughtered Silently website — to confiscate building equipment and workshops if they do not pay the “fees” imposed on them.

Other SDF violations in Raqqa

The organized looting by the SDF, of which the Kurdish People’s Protection Units (YPG) are the main component, are not the only ones to have afflicted the people of Raqqa.

The issue has reached the point of confiscating civilian property under the pretext of the owners belonging to ISIS, with hundreds of homes, farms and shops confiscated, in addition to “forcible” displacements of these civilians.

This has been contributed to by “the loss and destruction of records in the city and the destruction of more than a third of its buildings,” according to the United Nations delegation which was able to enter Raqqa at the start of last March, which described its task as “difficult because of restrictions on movement, weak communications and the tensions which the city is witnessing.”

The matter does not stop at the city of Raqqa alone, but in fact extends to most of the SDF-controlled areas in the Raqqa countryside, from the city of Tel Abyad in the north to the city of Tabqa to the south, which has seen civilian homes confiscated, expulsions to the camps and some arrested on the charge of belonging to ISIS, as well as imposing compulsory conscription on others.

The Self-Administration, which is dominated by the Democratic Union Party (PYD), has issued a circulation imposing on every civilian born between 1990 and 1999 a review by the “Civil Defense Duty” center in the city of Tabqa (the center assigned to receive young men enrolled in forced recruitment), accompanied by protests by residents over the decisions which developed into clashes with the Thuwar Raqqa Brigade, which is comprised of Arabs from the city.

Coinciding with these events, the Raqqa Civil Council of the SDF moved its base from Ayn Eissa to the Ibn Tufail secondary school in Raqqa city, amid predictions that it will try to restore life to the city.

But Hazem says that the actual facts on the ground indicate the complete opposite, as water is still cut off in most parts of the city while there is no electricity at all and the districts lack basic services needed to restore life.

All of these conditions are placing tens of thousands of displaced people between two choices: Either stay in the camps in severe conditions or return to the city despite the lack of security and support of NGOs, in addition to blackmail from the SDF and restrictions on their activities and attempts to restore normal life to their city.