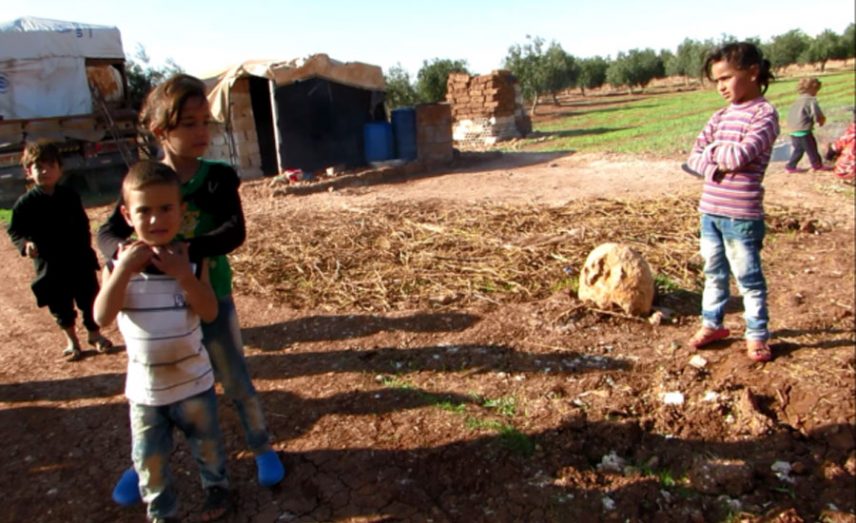 Displacements from one location to another and fleeing under bombardment are the conditions Syrians have endured for years. The role today is not new, but it has expanded in the northern Homs countryside, with death or displacement threatened by the Assad regime and its ally Russia.

The countryside has been under siege since 2013 and for days has been subject to a military campaign by regime forces backed by local and foreign militias, with the aim of pressuring the opposition and residents to accept the terms of the “settlement” which the regime wants — which are displacement, giving up weapons and returning to President Bashar al-Assad’s embrace.

The recent regime attack is focusing on the eastern villages of the northern countryside of Homs city and the southern Hama countryside, which is near the Salmiyeh highway, in an attempt to take control over the area.

More than 1,000 families have been forced to flee their villages to escape the death by bombardment that the regime is carrying out.

Ahmed al-Naimi, who works in livestock breeding in the Al-Hamarat village and has three children, fled with them to the town of Al-Dar al-Kibeera, which has seen negotiation rounds between the opposition and the other side.

Naimi told Sada al-Sham that regime forces have tried to enter the village with heavy artillery and air bombardment, which has affected most of the village’s houses.

This forced him to flee with his family with the aim of saving their lives and the lives of their small children, leaving behind them all their belongings and livestock which had secure a living for him and his family through producing milk, yogurt and cheese.

Naimi reached Al-Dar al-Kibeera, which is more than 40 km from his village, and was forced to live with his family with one of the families residing in the village because of the lack of empty houses in the area as a result of the many displaced people arriving there and his inability to pay rent for a house because of the high prices in the area.

Naimi adds that after days of fierce battles in the village, he went to collect some belongings from his house to find it destroyed by the heavy bombardment which affects the area.

He went back to his family with empty hands after losing his house and all that he owned because of the regime’s heavy bombardment.

Naimi’s situation is like that of about 1,000 families whom the regime displaced with bombardment of their homes. Khalid al-Hassan, a resident of the Al-Damina village who worked in farming, was in a no better state.

Hassan told Sada al-Sham: “After the regime’s attack on the villages of the eastern region and striking civilian houses with heavy artillery, I did not have any choice but to leave my house and land where I’d been waiting for the harvest to pay off the debts that have piled up since the start of the year.”

Hassan moved to live with his family in the Mazraa al-Saan area, and with his family suffers from a tragic situation, searching every day for food and drink to give his children.

The area has seen a siege for years and an increase in food prices, especially for wheat and bread, in addition to various difficulties, chiefly securing water.

He adds that the increasing prices are a major obstacle to securing bread and water for his family. All residents of the area suffer from his situation, and those most affected are those who lost their land which they had cultivated and planted their hopes to overcome the regime siege.

Jedaan pointed to the severe need of residents for humanitarian aid, stressing the need to secure bread for the displaced.

Most of the displaced people have not been able to bring their belongings as a result of the heavy bombardment, while the local councils in the area suffer from an inability to offer a helping hand to the displaced because of the delayed entry of humanitarian convoys to the area and the lack of these councils obtaining sufficient assistance.

Jedaan said that regime forces has prevented humanitarian convoys from entering the blockaded countryside for about two months, noting that the last U.N. convoy entered the town of Al-Dar al-Kibeera on March 4, 2018, and since then aid convoys to the northern Homs countryside have been cut off.

He said that the local council in the city of Talbeesa had issued a call for aid on April 21 because of the availability of flour stocks in the city, saying that had led to stopping handouts of subsidized bread to residents and displaced people.

About 300,000 civilians inhabit the northern Homs countryside, suffering from a major lack of food and medical supplies and fuel because of the siege policy pursued by the regime forces to subjugate rebellious areas of Syria.