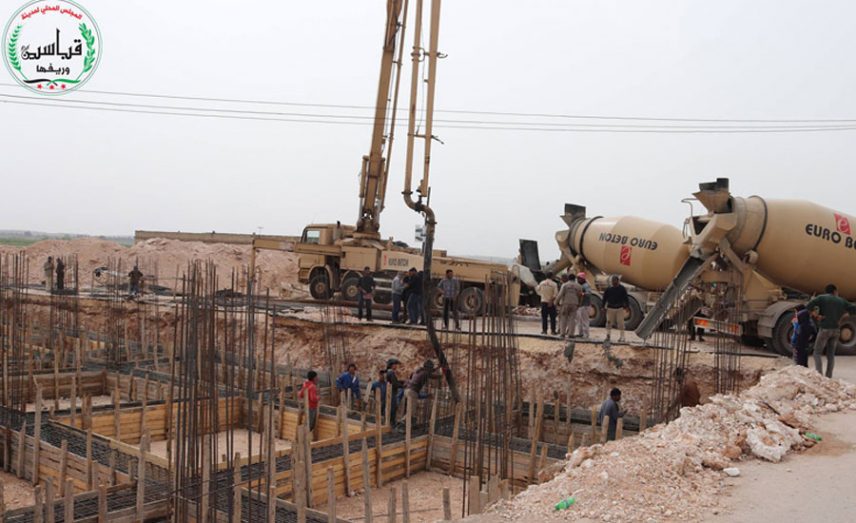 Private Turkish companies are imposing a new investment reality in the northern Aleppo countryside after establishing a foothold with major projects in the main service sectors required by residents.

This stage comes after the successive preparatory steps and operations carried out by the Turkish government in the northern Aleppo countryside after full control was taken by Free Syrian Army factions, with the current investments being a completion of this role, but by the hands of major businessmen who have entered with individual contracts and tenders with councils in northern Aleppo with Turkish states being mediators in their facilitation.

The investment situation in the Aleppo countryside is inseparable from reconstruction in Syria, in which Turkey is trying to enter through cities and towns which were destroyed by the fighting against the Islamic State group (ISIS) along its borders. It is trying to establish its presence in the area economically with projects that have been officially announced and others that have begun to be implemented by private companies by different means.

Since the start of 2018, three private companies have entered northern Aleppo with investments, the latest being a company which connected the electricity in the city of Azaz after it was cut off for years. The project which it implemented was the largest of its type in the region, based on the need of residents in the Aleppo countryside for electricity, as they currently depend on generators.

The project came as part of a contract signed by the local council in the city with the Turkish ET Energy company, which is privately owned. Kilis province mediated between the two parties, with the company vowing to provide Aziz with 30 megawatts in exchange for providing the land and raw materials needed to proceed with the project.

So far, the full cost of the project has reached about $7 million with a ten-year contract, according to the director of the services sector in the Azaz council, Mohamed Hajj Amr. In the event of any disagreement between the local council and the company, the Kilis company will resolve the issue, while the council will resolve any dispute between the company and citizens, according to the deal’s terms.

Hajj Amr told Enab Baladi that the council was a partner in terms of administration, while the Turkish company would be tasked with the remaining matters. He added the council had given land for a thermal station and administrative buildings and others for storage, as well as materials such as copper wires, aluminum and ground cables at a value of between $400,000-500,000.

The extension of the electricity lines will go into homes directly, and the Turkish company will provide special new electricity gauges, according to Hajj Amr, saying that the payment method will be through the Turkish postal institution (PTT) which has recently spread in the Aleppo countryside, with the subscription fees for each house at 400 Syrian pounds, refundable.

No subscriber has the right to obtain electricity until registering with the company and after the papers are certified directly in the council, which will take on the task of communication between citizens and the project owners.

Since taking full control of the area, Turkey has developed future plans in a variety of areas, whether in security through imposing laws in the region and compelling rebel groups to unite and move their military bases outside the cities, or economically through opening the crossings, leading to an unprecedented economic revival in the area, or in terms of services through supporting local councils and renovating facilities and roads and opening PTT branches (the famous Turkish postal institution) in Jarablus, Azaz, Al-Bab, and Al-Raie, and setting up towers for Turkish telecoms companies.

Before the electricity project being carried out in Azaz, there was a residential project in the city of Qabisein which the local council in the city signed with the Turkish private Jokturk company for construction and building in January.

The project has the name “Qabisein Residential Suburbs” and is composed of five concrete blocks containing 225 apartments and about 30 stores featuring different areas and built in the Turkish style. Work should be completed in August next year.

By the same mechanism, a contract was signed between the local council and the company for the council to provide land for building in Qabisein provided that the company carries out the items of the project.

According to the project manager, Ali Obeid, a memorandum of understanding was signed with the company, and the council obtained a specific portion of the apartments in exchange for the price of the land and was briefed on building conditions and specifications before the implementation process.

Since the start of March, the building process has begun but demand to buy apartments has not been at the required level. Obeid told Enab Baladi that the council expected an increase in the purchase rates after the building was fully completed.