Many people in Syria have customary marriages that are conducted by a religious official, but are not legal in the eyes of the state writes Al-Watan 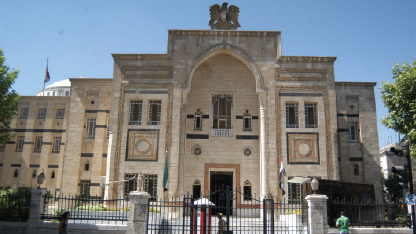 A member of the constitutional committee in parliament, Mohamed Khair al-Akam, said that a draft law which imposes prison terms for customary marriages needs a thorough review, and said that it had not yet been discussed in the committee. A customary marriage would be a marriage that has been officiated by a religious figure, but is not considered to be a legal state marriage.

A draft law that imposes imprisonment of up to six months on all those who hold a customary marriage that includes the bride and groom, the guardian and witnesses has sparked major controversy in Syrian, given that most Syrians have customary marriages before establishing them in the court.

In a statement to Al-Watan, Akam expressed his support for imposing imprisonment on invalid marriages and raising the fine for customary marriage, adding that the imprisonment only applies if the contract was totally null and void.

Akam believes that imposing prison time would dissuade people from establishing their customary marriages in court, saying citizens had customs which were making the marriage contract before arranging it in court.

He added that going directly to the courts to make a marriage contract is better than arranging it first in the customary fashion, but there were conditions that called for that. He said that if the punishment of imprisonment was imposed on customary marriages that would prevent real marriages from being established, and this was a flaw.

Akam pointed out that the Syrian constitution stipulated that Islamic jurisprudence was among the sources of legislation and so therefore if the marriage contract is valid in terms of sharia, it should not be considered a crime.

Akam said that imposing imprisonment on these marriages, which are considered a misdemeanor crime, so long as the contract is valid in terms of sharia, then it should not be a crime in terms of the Penal Code. He said that this was a violation of the third article of the constitution.

Akam said that one of the general principles of the constitution was to preserve the family and to encourage marriage. He pointed out that there were positive aspects of the draft law in terms of encouraging marriages to be established in court, especially in areas that were under the control of militants, where there were many cases women getting married that were already married to another man. These contracts are considered invalid and therefore a crime that should be punished by law.

Akam stressed the need to establish marriages in court as soon as possible and that people should not wait a long time to do this. He said that the reasons which had stopped marriages from being established in court could be addressed as this was a more effective way to limit customary marriage.

With regard to financial penalties, the draft law imposes a fine of up to 10,000 pounds against those who have customary marriages outside the court. In the Penal Code it does not exceed 200 pounds.