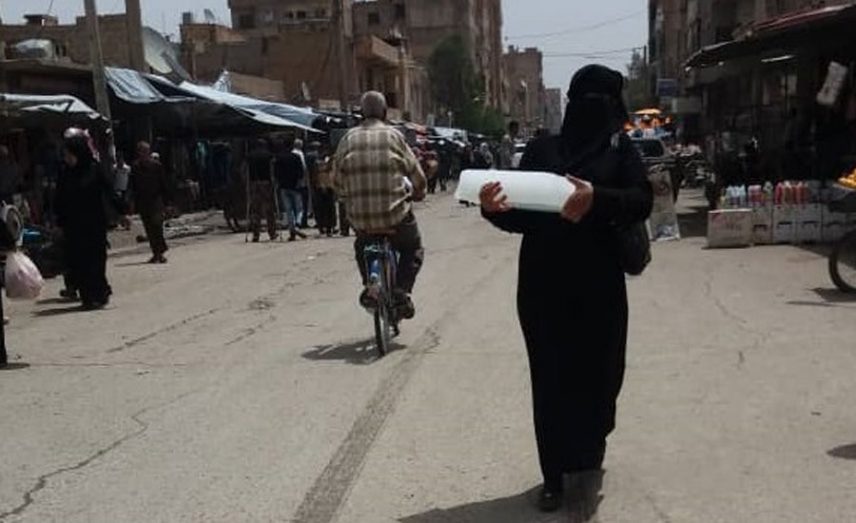 On the streets of al-Wadi, al-Joura and al-Houd, which have turned into flourishing markets, you can see the faces of foreign soldiers and fighters from militias from Iraq, Russia, Afghanistan and Lebanon. You can hear various accents and languages. Their prominent presence no longer creates curiosity or surprise among any of the residents of Deir-ez-Zor.

For anyone who has spent a long time in areas outside regime control, the visual space in the city of Deir-ez-Zor today — and especially the districts of al-Joura and al-Qasour, which remained under its control — appears very strange. Streets are closed by pickup trucks mounted with machine guns, and the graffiti on the walls glorify the regime army, the branches of its intelligence, or militias. Flags are drawn with differing degrees of skill, in addition to the images of Bashar al-Assad, which the new governor has ordered to be renewed and be made more prominent on major street corners. Military uniforms are worn by adolescents and young people, and even kohl, with some wearing badges of the National Defense, Liwa al-Quds, and Tiger Forces, or the Revolutionary Guard — as well as, to a lesser extent, the Ebdal Movement or Nujaba, Hezbollah or other militias.

The effects of using wood, paper, fabric, footwear, trash and plastic as fuel for cooking during the siege is apparent on most of the houses’ facades. It is also apparent on the faces of the people who have remained in the city over the last few years and now show the signs of exhaustion and early ageing. The look in their eyes no longer reflects the defiance, exploration and self-confidence they once had. They have become frightened, hesitant and fleeing from chronic horror, subject to just one status: submission. Even the irritability and tense behavior and other sharp characteristics of Deir-ez-Zor residents has been eradicated.

“M” was a trader until the summer of 2012, when a regime air strike destroyed the warehouse in the city center where he kept his goods. He left for the countryside before returning to the al-Qasour district in an attempt to resume his work as a merchant. He failed in that and gradually became bankrupt and ended up standing behind a vegetable cart.

M was previously known by his friends for his pride, generosity and sharpness of character. His circumstances have left none of these qualities behind. He began endearing himself to an influential person from among his acquaintances to obtain a contract to feed one of the militias, which was just a facade for this person. He does not seem to be aware of his decline, and complains only of a lack of money and inflation.

Abdullah — not his real name — says that he is a civil servant who returned recently after years spent displaced in Damascus. He says he is not yet familiar with the changes and new appearance of Deir-ez-Zor city. “In Damascus, many people maintained their situations and didn’t change. They managed to hide what was inside them. Here I feel there’s nothing left to hide in the first place.” In secret and in the open, people only have one issue, which is to survive and to improve the conditions of this survival under the regime with firm and final acceptance. There is no love in it, as Abdullah explains, but they are conscious of what they believe to be futility in confronting it.

Today, people in Deir-ez-Zor are divided into two classes.The first is the majority who have submitted to everything that has happened without expressing any degree of resentment, except within the permitted boundaries which puts blame on corrupt local people who are “delaying life returning to as it was before the revolution” as they say in one of their discussions revolving around the issues of inflation and the absence of public services.

The second class includes those connected to the security branches, militias, the war brokers and traders. The protection and privileges that they enjoy have made them bolder in defending the regime and in justifying the most heinous crimes it has carried out — even in cases in which their friends, relatives and perhaps even siblings have been victims.