The Syrian regime has allocated six billion pounds, but many say that it is not enough writes Souriatna 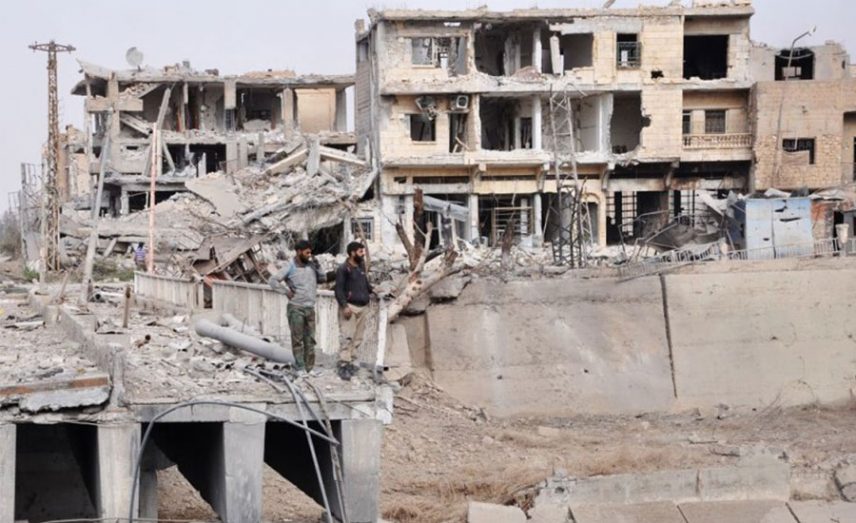 The Syrian regime has announced the beginning of the reconstruction of infrastructure in Deir ez-Zor, and has allocated six billion pounds for construction, months after its forces regained control. This comes amid talk about the return of a million people to Deir ez-Zor, in which analysts see as a new effort by the Assad regime to promote the idea that life has returned to the city. Analysts also doubt the extent of the regime’s seriousness in reconstruction in light of Iranian hegemony over this area.

A few days ago, the regime’s governor of Deir ez-Zor, Mohamed Samarah, said: “Six billion pounds has been allocated on an emergency basis to reconstruct and rebuild what the terrorist groups destroyed, especially the Islamic State, in terms of the city’s infrastructure.” He added that the reconstruction process would take a long time and a lot of effort and major material resources.

Samarah told the Russian Sputnik news agency that they had studied and reviewed a number of projects to rehabilitate the roads, streets and institutions, which had been submitted to the government for funding. He said that the rate of destruction of Deir ez-Zor’s city districts which were under the control of ISIS ranged between about 75 to 80 percent, and there were some that were also 90 percent destroyed. The Minister of Oil and Mineral Resources, Ali Ghanem, has said that the regime is eager to restore life to Deir ez-Zor province and pursue work and projects, and that necessary funds have been allocated, with 27 projects underway to restore life to the city, but the rate of implementation is very limited.

Tourism Minister Bishr Yazigi has meanwhile revealed that studies have been prepared to rebuild the closed Deir ez-Zor bridge, in addition to working to restore Deir ez-Zor’s distinctive river canteens and parks, as well as rehabilitating the two tourist facilities in preparation to relaunch the tourism sector there.

Activists and observers doubt how serious the regime is in its efforts to reconstruct Deir ez-Zor. The editing manager of the Alsharq News network, Firas Alawi, told Souriatna that “the six billion that has been allocated by the regime for reconstruction is not enough, especially given that Deir ez-Zor’s infrastructure needs to be completely rebuilt, This means that the regime is not serious about reconstruction and is giving imaginary numbers not based on deep studies of the area’s situation.”

Alawi added that “the regime will use the funds allocated for reconstruction to serve projects under its control and to bolster the Iranian presence in the area. At the same time, it will make itself appear to be the victor and that it is in control as well as that it’s interested in restoring services to citizens, in order to encourage them to return to the area.”

For his part, a researcher at the Orient Policy Center, Saad al-Shara, said that “the numbers which the regime is talking about for Deir ez-Zor’s reconstruction are delusional numbers, because the province needs more than the the amounts they’ve noted. This is because the rates of destruction there are high and may be more than other provinces in which cities were totally destroyed. Therefore the regime is aiming with these statements to obtain financial sums in the name of reconstruction.”

Iran and Russia are also competing to obtain privileges for reconstruction projects in Syria, as the Assad regime and Moscow have signed a “roadmap” for cooperation between the two countries through 2018 and the coming stages. This includes the stages of implementing strategic projects related to reconstruction and renewing Syrian energy facilities.

The Iranian Foreign Minister, Javad Zarif, hinted at Tehran’s concern over Moscow’s takeover of the reconstruction issue in Syria when he said that “Russia’s presence in reconstruction does not mean Iran has no presence.”

The Iranian President Hassan Rouhani said about a month ago in a message sent to Bashar al-Assad that his country was prepared to employ all its capabilities for Syria’s reconstruction in light of Russia’s dominance over most issues in Syria, including the reconstruction issue which has been estimated to cost 200 to 300 billion US dollars.

Media activist Mohamed Howaidy said: “In light of Iran’s dominance in Deir ez-Zor through its militias, it is trying to take over reconstruction in this area. Iranian institutions have also obtained contracts with the regime in this area to clear rubble and to supply water. There is a project Iran wants to buy on the western bank of the Euphrates and thereby control all matters of life for Deir ez-Zor’s residents.”

Howaidy added that “service facilities have been totally destroyed and put out of operation, including water and electricity networks. The regime promoted the return of electricity to Deir ez-Zor at the beginning of Ramadan, but the power is only available for a few hours before it is cut off again. The water situation is also unstable and cuts out continuously. The regime is still unable to offer services to residents.”

The Alsharq Asouri agency said that Iran’s Jihad al-Bina organization has opened an office in the city of Albu Kamal in the eastern Deir ez-Zor countryside to buy houses and begin reconstruction as a part of the “demographic change” operations in Syria, to get a foothold in the area.

The agency added that the Jihad al-Bina agency was conducting reconstruction projects which it had obtained in Albu Kamal such as cleaning districts and rehabilitating some schools, in addition to providing Iranian militias with assistance.

The minister of oil and mineral resources has also announced the return of 172,000 families to Deir ez-Zor, or about 1 million people, in addition to 22,000 workers returning to the province.

Firas Alawi denied the truth of these numbers, and said that “the number of Deir ez-Zor residents according to the recent statistics is about 1.4 million, but there are areas that are completely empty of residents where no one has returned, and those who were displaced from Deir ez-Zor did not reach a million. The regime also controls half of Deir ez-Zor, and therefore only controls half of the residents.”

Alawi added that there were thousands of displaced from Deir ez-Zor in camps in the Hasakeh countryside who were unable to return to their homes for many reasons, including the security factor, as well as the huge rate of property destruction.

At the same time, Iran’s militias in Deir ez-Zor have imposed financial fees on residents moving between areas under regime and SDF control in the province’s west through the al-Shamaita water crossing.

Regime forces has required all residents who want to return to their homes in Albu Kamal to obtain official permission from militia leadership which controls the city, with warnings not to approach within 100 meters of military and security sites or face punishment.

Regime forces also imposed a number of conditions on those who want to return to their villages and towns in the eastern countryside, including a family member volunteering in its militias, in addition to fines and other conditions, which have contributed to thousands of residents not returning to their homes.