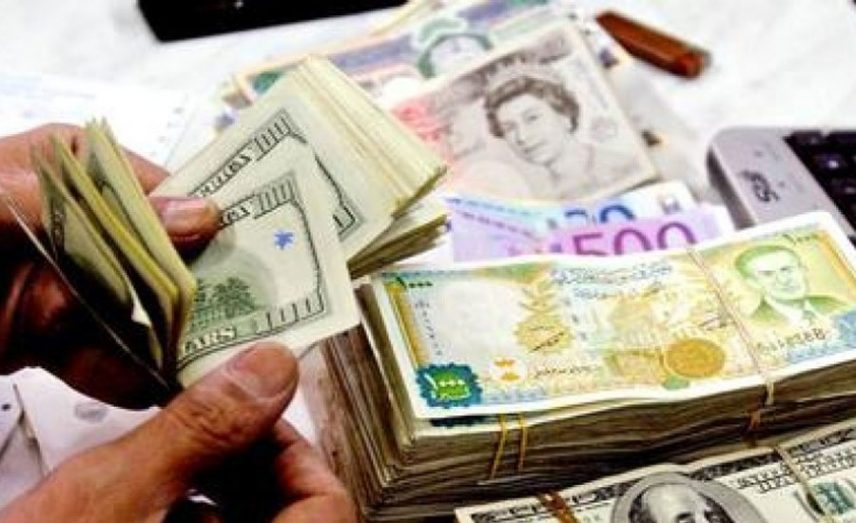 It seems that the expression “there are no winners in war” does not apply to the many suspicious activities that thrive as bullets whizz overhead. The more destruction and corruption spreads, the more conditions change from recession to hoarding and the snatching up of opportunities.

Abou Samir runs a driving school in a Damascus suburb. The office does not exceed more than a few square meters. If you really intend on learning how to drive, you could actually go to the school and he would help you get a license.

However the modest office does not reveal the full list of services which Abou Samir offers without a license, including financial loans to currency exchange, and a list of actions which belong to the so-called black market.

In Damascus, like many other cities, there are those who exploit the needs of the people who are the most desperate, and it is not strange to find moneylenders offering funds with high interest rates.

Although Abou Samir began his work years before the war, the volume of work during the years of the war has exceeded his aspirations and what he had previously carried out, with greater caution and on fewer occasions.

His works is flourishing, according to Manual, a former bank employee, due to an increase in demand for loans in light of the economic collapse and the banks and civil associations stopping work, as well as lenders being immune from prosecution by the regime and officials who have opened the door to exploitation and plunder.

Abou Samir spends his time between Syria and Lebanon, and the geographical area his work covers has increased. He did not reach this point easily, and he is still cautious, as though it is one of the requirements of the profession, although he also acts boldly and with warm reception, the demeanour of a person managing charity work.

The meeting with him was brief, and he quickly entered into the subject — a loan of 1,000 dollars for six months, with monthly interest set at 100 dollars. Borrowers must leave collateral worth more than 2,000 dollars before taking the money. He seemed upset when asked for an explanation, but he quickly responded without hesitation. He said he accepts all forms of collateral, including real estate, cars, and precious valuables. He also accepts guarantees from well-known traders with a “fingerprint” on security documents. The discussion with him ends when he felt the request was not serious. He made a call and left the office as he entered, smiling.

When the debtor is unable to pay the lender takes the collateral, if he has the items in his possession, such as gold or jewellery. If the collateral is larger, real estate and cars for example, then it is put up for sale at a public auction as soon as possible.

For security bonds, a lawyer from Damascus (who asked that his name not be disclosed) said: “Moneylending is illegal in all its forms according to the law, and a security bond in reality conceals a lending contract and can establish the loan in writing and certification. But this type of bond is subject to implementation. If the implementor refuses the bond’s subject, the manager of the implementation is forced to refer him to court. After which a ruling is issued and implemented in a peremptory fashion.” For this reason, the lender relies on collateral in the first place, while the security bond is an additional guarantee that carries the debtor’s fingerprints and gives the debt a legal appearance.

In cases in which patients are forced to borrow money with interest, for surgery or to buy costly medicine, the lenders do not offer any sympathy, but rather strengthens their terms. They reject the patient marking a security bond out of fear they might die, and instead taking the fingerprints of one of their children on the document, in addition to raising the value of the collateral and asking for additional guarantees.

Waleed works as a day laborer at a metal workshop, and his mother needed heart surgery, which cost more than 300 dollars in public and private hospitals alike. Waleed’s average monthly income was no more than 50 dollars, which forced him to put his house up as collateral. He was later forced to sell his house for less than it was worth after he failed to get help from charities because there were more serious cases than his mother’s.

There are other cases in which people are forced to borrow money without a date set to make the repayment, so they keep paying monthly interest until the amount is paid in full with the collateral put up for the whole period of the debt. Qusay, a taxi driver, was unable to find a way to secure 150,000 pounds to pay for the insurance for his car, except by taking a loan from a lender. He put up his mobile phone and marked a security bond with a guarantee from one of his acquaintances.

Every month his must pay 15,000 pounds to the lender and many months when he fails to make the required amount, he is forced to borrow again. The young driver is now drowning in debt, despite working for long hours as a driver every day.