The residents of Raqqa, who have returned to the city, have been shocked by the amount of destruction and complain about the behaviour of the SDF writes Enab Baladi 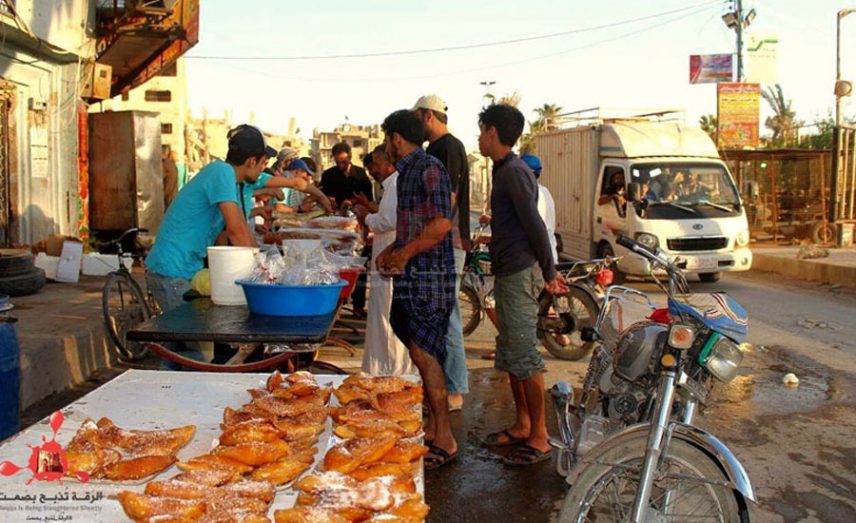 Children and teenagers swim in the Euphrates River, as a number of young people sit on the shores, exchanging chatter and passing the time until the sunset. Before iftar in Ramadan this is a typical scene for the area near the old bridge in Raqqa city.

This scene is an indication that life is returning to Raqqa after three years of Islamic State (ISIS) rule.

“Ramadan this year is different and more joyful,” says Umm Ismail. Many shops have reopened and a Ramadan atmosphere pervades the markets which are preparing for Eid. She shows her sorrow at the departure of many of her neighbors, and tragedy, suffering and human and material loss that has befallen the city.

The return of residents to the city and the renewed life is accompanied by feelings of sorrow and defeat at what they have returned to. Their landmarks, streets, homes and gardens were turned into graveyards for the hundreds that were killed during the coalition’s bombardment of the city, according to Ahmed, 29, who is from the Rumaila district. He adds that, “Everything has changed. The amount of destruction is terrifying, and there is still rubble in every part of the city.”

Ahmed accuses the Syrian Democratic Forces (SDF) of neglecting and harassing residents, and blames them for the delay in repairs and impeding construction. He said that “the SDF and their Civil Council have not done anything. Many corpses are still under the rubble or have been dumped in open areas to rot. I don’t know why they haven’t buried them yet.”

Many building and restoration projects have been stopped by the SDF who say that they need to organize and issue the necessary licenses. There is also a lack of services such as electricity, water and the repairs that the Civil Council have carried out are inadequate.

The young man asks: “What are they doing except painting and renewing the roundabouts and putting up images and signs on the walls in the same way that ISIS and others did before … Painting a roundabout will not sweep away the image of destruction around it, and it will not give people the security they are looking for. The image of Ocalan (the leader of the Kurdistan Workers’ Party) will not give people a good life.”

The SDF took control of Raqqa in mid-November, 2017, ending the rule of the extremist organization, which declared the city as their capital and was a symbol of their influence in Syria.

Some of the people that Enab Baladi communicated clearly expressed their needs, calling for more services and rejecting the oppression they have suffered at the hands of the SDF members.

Mohamed al-Hussein, 48, known as Abou Abdullah, said that fear has returned to the city. During Ramadan, the SDF has oppressed and bothered residents and theft and killings have also risen.Resident have complained that the fighters have been eating openly and not being mindful of customs and traditions, as well as destroying some houses and shops, and making arbitrary arrests.

Along with the rise in protests by residents, there has been increasing tensions between local Arab factions within the SDF and Kurdish fighters from outside the city that have reached the point of armed clashes, which threatens stability and prevents the achievement of progress.

Activist Baraa Taha told Enab Baladi that he fears for Raqqa’s diverse social fabric, because many are merging, either with good or bad intentions, the SDF as a civil, political and military organization and the Kurds who are one of the social components of Raqqa.

Despite the difficulties of life in Raqqa, this has not prevented hundreds of residents from returning, with Raqqa seeing a notable increase in the population, amid expectations that thousands of the displaced and refugees will return over Eid and in the coming months.