The cafes of Damascus, that were once a staple for all social classes in Syria are changing to exclusively become hangouts for the rich writes Sada al-Sham 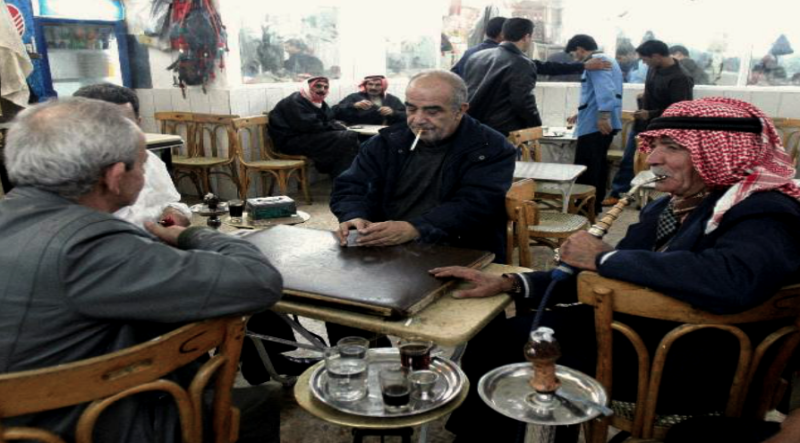 A snapshot of Damascus’s cafes will show us what the war has done to the most prominent aspects of social and cultural life in the Syrian capital. Over the past seven years, the money of the warlords has flooded in, to gnaw away and digest large segments of the city’s facilities, which seem to be undergoing fundamental changes to their general urban character.

Cafes are not the only way of measuring the pulse of the city, which is rising today in the eighth year of the war — but as public facilities they are going extinct and transforming overnight into restaurants frequented by the war’s wealthy. A short tour among the main districts of Damascus will show the extent of the burglary displayed on the sidewalks of the five-star restaurants which have become a manifestation of laundering money and squandering it on the pleasures of sons and daughters of those with influence and others, financed by the war itself. A restaurant culture has spread — a culture of eating as a direct form of public life.

Little by little, tables and chairs and luxury cars have crowded the sidewalks of the Abou Rummaneh, Al-Malaki and the Al-Mezzeh districts, which have seen the spread of more restaurants and cafes. We need not mention that these are monopolized by the wealthy, with the bill for a cheap night out coming to about 50,000 Syria pounds, or about 100 US dollars.

The war has changed the form of the old cafe and middle-class family restaurant, marking these places with luxurious crystalline facades. They have become subject to the severe class differences within Syrian society, where a middle class income ranges between 70 to 85 US dollars — the salary of a first-class civil servant — not enough to cover a single meal at these war cafes and restaurants.

The rich have grown richer, the poor poorer, with many of those on limited income now being denied access to the cafes and restaurants that previously catered for the poor and are now struggling to stay on the map.

From Al-Rowda cafe on al-Abed street to the Al-Kemal summer cafe and al-Havana, up to the Al-Hijaz cafe on al-Nasser street, the cultured people that still remain, sit out in public, barely able to pay the price of a cup of coffee and a small bottle of water that allows them to be there. Some of these establishments have at least preserved the appearance of the old cafes, far from the huge plasma screens installed in other cafes to show European league games, or the World Cup, or the Syrian series with reactionary and backwards messages.

The general character of today’s modern cafe is the presence of WiFi. The customer enters the cafe to use the internet, and that’s that. Enter any cafe of this type in Damascus, which is the dominant type in the city, to confirm that all heads are bowed before mobile phones, combing through social media sites, without looking even once at who is sitting with them at the cafe table.

Hookah and mobile phones have made the visitors to these cafes nearly silent, only rarely speaking to one another — it is a new form of cafe visitors, where social media is the form of communication, not conversation or cultural or social discussions.

Everyone here is busy picking through the likes and comments on Facebook, turning the cafe into a mere meeting point for people who are barely look at each others faces. And when they do look, they are still hypnotized by their phones, which according to new studies in the media world, have turned them into a “head-bending tribe” — the largest tribe in the world today, with their heads bent towards the screens of their phone.