The return of refugees, the releasing of abductees and the de-escalation agreement for Idelb were also discussed in Sochi writes SANA 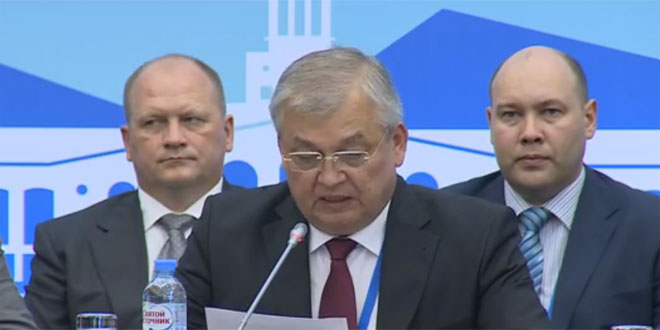 The guarantor states of the Astana process (Iran, Russia and Turkey) reiterated their strong commitment to the sovereignty, independence, unity and territorial integrity of Syria and the continuation of the fight against terrorism.

The Head of Syrian Arab Republic’s delegation to the tenth round of Astana meetings in Sochi, Bashar al-Jaafari, stressed that the main obstacle to the return of Syrian refugees to their home is the unilateral coercive measures imposed on Syria by the US and the EU, and renewed Syria’s request for these measures to be lifted immediately.

In its final statement, the guarantor states reaffirmed their determination to fight terrorism in Syria in order to ultimately eliminate the Islamic State (ISIS), Jabhat al-Nusra and all other individuals, groups and entities associated with them or with Al-Qaeda as designated by the UN Security Council.

The Sochi statement added that the parties agreed to continue tripartite coordination on the situation in Syria and expressed their determination to stand against separatist agendas aimed at undermining the sovereignty and territorial integrity of Syria as well as the national security of neighboring countries.

“The parties would continue joint efforts aimed at advancing the Syrian led and Syrian-owned process of the political settlement in order to create conditions to facilitate the beginning of the Constitutional Committee’s work in Geneva, as soon as possible, consistent with the decisions of the Congress of the Syrian National Dialogue in Sochi and the UN Security Council resolution 2254,” according to the statement.

They expressed satisfaction with the useful consultations with the UN Special Envoy for Syria Staffan de Mistura and agreed to convene the next round of consultations in Geneva in September 2018.

The guarantor states called upon the international community, particularly the UN and its humanitarian agencies, to increase its assistance to Syria by sending additional humanitarian aid, facilitating humanitarian mine action, restoring basic infrastructure assets, including social and economic facilities, and preserving historical heritage.

The parties underscored the need to encourage efforts that help all Syrians restore normal life, noting that discussions started in coordination with the international community, the Office of the United Nations High Commissioner for Refugees (UNHCR) and specialized international agencies, in order to create conditions necessary for the safe and voluntary return of internally displaced people and refugees to their original places of residence in Syria.

The statement added that the parties would continue the joint efforts aimed at building confidence among all Syrian parties and working to determine the fate of abductees and the missing and releasing them.

The parties decided to hold the next high-level international meeting on Syria in November 2018.

Head of Syrian Arab Republic’s delegation to the tenth round of Astana meeting in Sochi, Bashar al-Jaafari, stressed that this round of talks has been fruitful and yielded significant results, particularly during the discussion of the return of displaced Syrians to their homeland.

In a press conference at the conclusion of today’s round of talks, al-Jaafari noted that Syria encourages local reconciliation processes, adding that these processes do not include terrorist organizations listed by the UN Security Council as terrorist entities.

He added that the Syrian army has the right to retake control of Idleb through military operation if the reconciliations failed.

The Syrian diplomat pointed out that the Turkish authorities have failed to respect their obligations regarding the de-escalation zone in Idleb as provided by the Astana statement as they deployed military forces equipped with heavy weapons, occupied Afrin and expelled its inhabitants, adding that the presence of Jabhat al-Nusra terrorist organization in Idleb puts the credibility of the Turkish regime in terms of implementing the Astana statement and international resolutions to the test.