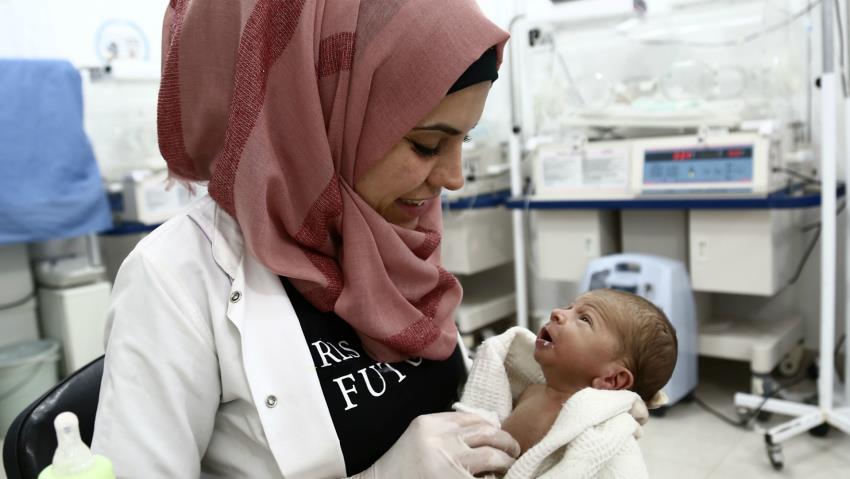 Her scarred hands wrapped in gloves, Malakeh Harbaliyya lifted an infant out of an incubator at a hospital in Syria's rural north, holding him gently as he guzzled milk from a bottle.

Nearly two years ago, the nurse and her brave colleagues were scrambling to save premature babies from heavy regime bombardment of Aleppo city, before ultimately being forced to quit the facility altogether.

Now the same team of doctors has reunited to open Hope Hospital in northern parts of the province still outside regime control.

"I think of the children first before thinking of myself, because their lives are in our hands," said 31-year-old Malakeh at the facility in rebel-held Al-Ghandura.

"Their tiny souls didn't do anything to deserve this war."

In November 2016, she was working in the only children's hospital still operating in rebel parts of Aleppo city when an airstrike slammed into the building.

In footage of the aftermath, Malakeh is seen scooping up a baby in a light pink blanket, then suddenly bursting into loud sobs.

Barely eight months later, after evacuating the city, a car bomb sent Malakeh herself into intensive care in neighboring Turkey.

But she has pulled through, and the severe burns on her hands have today healed into a swirl of scars.

Her hair covered by a pink-colored scarf and dressed in a top that reads Girls for the Future, Malakeh beamed as she lovingly pinched a frail infant's cheeks.

"My colleagues at the Hope Hospital – the staff with me here – gave me the will to live," she said.

In blue scrubs, Dr Hatem greeted his colleagues at the door before heading in to examine a girl squirming on a consultation bed from stomach pain.

The hallway features a large portrait of Mohammad Wassim Maaz, a beloved children's doctor who died in an airstrike on Aleppo city in April 2016.

Later that year, after the city's Children's Hospital was knocked out of action and as a regime victory loomed, Hatem and his colleagues formulated a plan.

With government troops closing in, the staff knew they would soon be evacuated from Aleppo and wanted to stay together, said the 32-year-old doctor, also the hospital's director.

"Wherever we went, we wanted to set up a children's hospital," said Hatem, preferring not to give his surname.

In under a month, a crowdfunding campaign by the Turkey-based Independent Doctors Association and Britain's CanDo charity gathered enough donations from around the world to rehabilitate and run a new hospital for a whole year.

"We would never have imagined that we could find the whole amount in just three weeks," Hatem said.

With equipment brought from Britain via neighboring Turkey, they opened the Hope Hospital in April 2017 in the previously underserved Al-Ghandura district.

"There was not a single dispensary or anything to do with medicine in the whole area," said Hatem, who crisscrossed parts of the province still under rebel control looking for a good location.

Slowly, the facility grew into a fully-fledged children's hospital complete with nine baby incubators, a malnutrition clinic, a well-equipped lab and emergency services.

After having to refer many women to another hospital, they added an obstetrics and gynaecology section too.

"The team is mostly the same as the one in Aleppo but, because of the bigger workload here and the higher turnout, we had to increase staff," said Hatem.

As the only specialised facility for miles, his clinic set amidst tall pine trees receives 8,500 to 9,500 cases a month.

"The Hope Hospital really is a point of hope," he said.

"It allowed the staff from Aleppo to feel that there is still humanity left in the world," Hatem said of the donations that brought the facility to life.

But funds have started to run out and another crowd-funding campaign failed to meet its target.

Now, staff hope to sign a contract with the UN's children agency (UNICEF) to help run the facility for six more months.

Hospital manager Riyadh Najjar, 31, said the hospital is providing services to many in need.

"It's anguishing to leave your city, but here you have the opportunity to serve people," he said, dressed in trousers and a white t-shirt.

Beyond the district's original inhabitants, Najjar said the hospital also serves many Syrians displaced from other parts of the country by the seven-year war.

Like the hospital staff, patients come from Aleppo city, but also the central province of Homs and northern province of Raqa.

"It's something extraordinary to be able to offer them medical services and help them," said Najjar.