Following the disastrous announcement of an elections commission, questions are now being ask about whether the SNC should be dissolved and replaced writes Al-Araby Al-Jadeed. 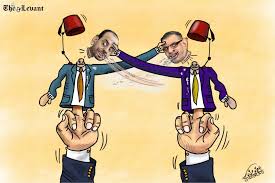 The National Coalition for Syrian Revolution and Opposition Forces (SNC) has been struggling for days. It is the first time that many voices are raised against it, some of which have reached the point of calling for the dissolution of SNC and the formation of a new political body that is able to represent the revolution and the opposition when it comes to a political solution, “away from subordination and submission to the wills of the states that have decisive power.”

The campaign came after the SNC announced the formation of a national elections commission, which a large portion of Syrians considered a step towards granting legitimacy to Bashar al-Assad and his regime in the upcoming presidential elections, scheduled for April.

Ten years of the life of the Syrian people’s revolution against the Assad family’s rule were sufficient for radical changes to take place on the Syrian scene, except for within the institution known as the SNC, which remained unwavering, and those in charge of it kept their seats and known rituals, and turned, with time, into something like a special Masonic lodge managed by a group of people on rotation.

Those people have become distant from the concerns and problems of the Syrians, and cut off from the Syrian reality, with all its collapses and negative repercussions. Nevertheless, the SNC leaders act as if they have been authorized by the Syrians to decide the latter’s fate. They declare, and with outright confidence, that they represent the Syrian people, while they were not elected by the people, and no one has delegated anything to them.

The SNC has previously made some mistakes and carried out practices far from the spirit of the Syrian revolution, but the opposition did not pay any attention to that, nor the most recent, which was the exchange of positions between Nasr al-Hariri and Anas al-Abdah.

There are instances where the SNC did not show up for the people, especially in regards to the successive assassinations Syria has been witnessing since the battle of Aleppo at the end of 2016, and the subsequent forced displacement of Syrians from Aleppo, Homs, rural Damascus, and Daraa. At that time, the SNC had its eyes focused on the political game only.

Regarding participation in the Assad elections, the general trend on the street is still echoing the goals delineated in the very beginning. There is determination to be rescued from the rule of the Assadist mafia, the Russian and Iranian occupations that it has dragged along, and the Afghan, Pakistani, Iraqi, and Lebanese militias attached to it.

It is true that the people paid the price in human lives and property, but they did not give up on reaching the ultimate goal. There is a general conviction that there is a solution to the Syrian issue, despite the reluctance of the Russians and Iranians. There is also a conviction that Assad will not be part of the solution, as he is directly responsible for the Syrian Nakba, regardless of whether he will be brought to international courts, or whether Russia and Iran decide to protect him and his team outside Syria. Consequently, it is not within the authority of any party to acknowledge Assad under the banner of presidential elections.

What the broad sector of Syrians clings to is not a romantic dream, but rather a legitimate right represented in the return of the forcibly displaced to their homes and lands, compensation for the loss of life and material belongings, and the launch of a political process under the supervision of the United Nations, based on Geneva 2.

This right is inalienable and is not rendered invalid under any circumstances, regardless of the passage of time. This right is guaranteed under all international charters and laws, and no one can bypass it — neither Russia, Iran, or Assad. It will be achieved in the first settlement that takes place and it will be the most basic condition for the seriousness, success, and sustainability of any solution to the Syrian issue. It goes without saying that this right is not negotiable. Rather, it is self-evident, and will not happen with Assad in power.