Syria’s recent elections for the People’s Assembly and structure of government could provide a model for South African politics writes Reneva Fourie for The Syria Times. 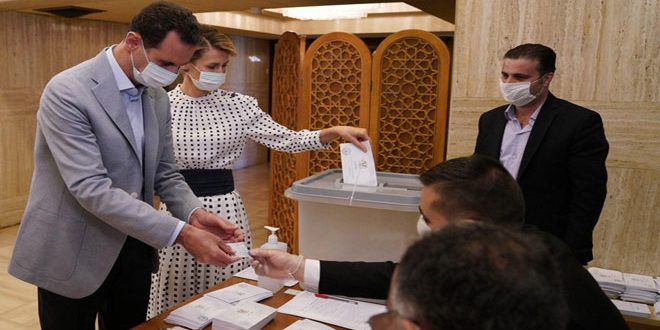 There is much that South Africa can learn from the Syrian electoral system, particularly as we amend our electoral law to be in line with the June 2020, Concourt ruling. They have a uni-cameral system; members of Parliament are directly elected; and the President is also directly elected by the people.

While sanctions might be a severe economic deterrent; and COVID-19 a medical one; neither stopped Syrians from participating in their recent parliamentary elections. From the early hours of Sunday, Syrians ascended upon 7,400 polling stations to vote for their choice of candidates that will occupy what is called the ‘People’s Assembly’.

Syria has conducted elections regularly since 1970. This year, the parliamentary elections were shifted first from Apr. 13 to May 20, 2020, and then once more due to the COVID-19 pandemic. With the spread of the virus largely contained, elections by secret ballot, proceeded today.  The necessary safety measures were applied as social distancing was enforced, and voters and electoral officials wore masks.

Voters were spoilt for choice as 1,656 candidates availed themselves for the 250 seats. The canvassing process combined both traditional and new methods.  Posters lined the streets, but in line with modernity, social media was the preferred tool of mobilisation, especially by those who could not afford posters.  Beautifully designed e-posters detailing the qualities, experiences and aspirational commitments of candidates were broadly circulated on applications such as WhatsApp by supporters, and even the candidates themselves.

Syria has a uni-cameral system – i.e. there is just one house of Parliament, as opposed to South Africa’s National Assembly and National Council of Provinces. Candidates are representative of fifteen electoral districts, so there is no need for a provincial election. This is cost-effective, in that the number of MPs is significantly less than our 400; and there are no duplications of positions of power. For instance, there is only one Speaker as opposed to our having a Speaker and a Chairperson of the NCOP; there is only one Chief Whip; each committee only has one Chairperson etc.

To ensure that Parliament prioritises the interests of the workers and the poor, Presidential Decree No. 76 of 2020, which set the initial date for the elections, also stated that at least 127 of the elected members should be from the worker and farmers’ sectors, with 123 from the other groups of the population. This is an important intervention as it prevents elite capture of the legislature and contributes to ensuring that the government indeed serves the most marginalised and vulnerable.

While candidates were from political parties, many were independent. The electorate votes directly for the candidate, regardless of whether the person is representing a party, or is an independent – similar to our ward councillor elections in local government. Syria holds separate Presidential elections, and the people vote directly for their President. It is particularly this aspect that speaks to the Concourt ruling of June 11, that our Electoral Act is unconstitutional in that it does not allow for independent candidates in the national and provincial elections, thereby limiting the rights of individuals as enshrined in the Constitution.

The functions of the People’s Assembly are the same as that of any Parliament, in that it endorses the President; processes legislation; ratifies treaties; and approves and monitors the budgets and programmes of the Executive, or ‘Council of Ministers’. The powers of Parliament are however more extensive than those of South Africa in that, while the President appoints the Council of Ministers, Parliament has the right to place a motion of no confidence either in an individual minister, or in the entire Executive. The motion of no confidence only requires the support of 20 percent of MPs to be considered and requires a simple majority to pass. This is fundamental as it empowers the people, through their representatives, to remove non-performing ministers.

Just as Parliament endorses the candidate who wins the Presidential election, aspiring candidates must have the support of at least 35 MPs. Significantly, anyone over the age of 18, that can galvanise the necessary Parliamentary support, is able to contest for the position of President. While Parliamentary elections take place every four years, Presidential elections take place every seven years.

South Africans are tired of wastage and incompetence. The required amendments to the Electoral Act give us an opportunity to deepen the efficacy of democracy in our country. Making our electoral processes less complicated; reducing the size of Parliament; enabling direct elections; and giving Parliament the powers to remove incompetent ministers might be just what we need.

To quote former President Mandela, but applying it to the whole of government, “The ANC must, at every stage, earn the title of leader of our people by its sensitivity to their aspirations and by responding to their needs and demands. … The ANC will flourish or fail to the extent that the exploited and the oppressed see it as their movement, championing their rights and as the embodiment of their will.” Strengthening our electoral system, even if it means tweaking the Constitution, including drawing on some lessons from Syria, is one way of honouring Madiba in this Mandela month.

Reneva Fourie is a policy analyst specialising in governance, development and security. She currently resides in Syria.