Turkey's actions in northern Syria have given him plenty of diplomatic leverage and it will allow him to implement his plans for demographic change writes Brocar Press. 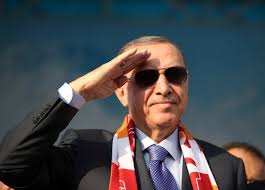 Turkish President Recep Tayyip Erdogan knows that Syria will not, in a practical sense, remain a country with national sovereignty. That is to say, what he wants is it not to be in the hands of the Assad regime, but to be become shared between two major countries—the United States and Russia. This is what caused him to hurdle the Adana agreement, which allows him to operate inside Syrian territory, according to a text signed with the Syrian government, and move towards a so-called “safe zone” which both Washington and Moscow now want.

President Donald Trump believes that this zone achieves his country’s interests as a safe corridor, which soothes the military conflict on the border with Turkey and Iraq, and which he can use as a cudgel to curb Iran in the region, and ultimately use it as a safe area in his interests, not  in the interests of Turkey, by changing the tasks delegated to his NATO partner.

So far, however, this does not seem feasible given his populist policy, which only leads to America continuing to abandon its allies and blinding voters with “peaceful” and economic returns. That means that the American vacillation will be a factor during this process of unfair division. It will also mean that Russia, which also opened the door to Ankara, finds in the Turkish presence and its ambitions the opportunity to open the closed windows for its economic projects in the region and justify jumping past the European rejection toward the anticipated reconstruction process.

What the Turkish army will do in Syria was outlined by President Erdogan’s visit to his Russian counterpart Putin on Tuesday in Sochi. The contents of the agreements and the partners’ shares are based on the fact that the battle—despite being left behind in the media—is part of what can be called the decisive international battle to define the dividing lines. These are not only geographical borders, but the borders of the actual partnerships on the ground in this battle, according to the logic of the “the strongest ones rule.” They are changing and being used not only to determine the military front lines but also the demographic composition, with parties taking their shares to guarantee their safe zone. This will change Syria from a geographically united country into a country of safe zones, which each team will use to make its loyalists the overwhelming majority on the map of demographic distribution.

Turkey is bolstering the safe zone with a demographic group that are mostly not from northeastern Syria. This is not something new for Syria. The regime—with the cooperation and sponsorship of Iran and its proxies, and with the collusion of the al-Nusra Front and groups affiliated with the opposition (Ahrar al-Sham) and amid near-total international silence about what is happening today—has set up similar areas in the Damascus countryside following the “four cities” agreement of 2017 (Zabadani, Madaya, Kefraya and Foua). The United States meanwhile was overseeing a safe area for its Kurdish allies in which Arab families were forcibly displaced, meaning that the safe areas were in reality areas of demographic displacement carried out on all levels, from the regime, to the armed groups, to the sponsor states—Russia, the United States and Turkey.

Erdogan’s meeting in Sochi allows him to share the gains with his Russian partner, carved out by his American partner to expand his options against Russia and to strengthen his position—as happened in 2018 when Russia tried to invade Idleb—and to illustrate his functional roles in Syria’s north, divided between the three partners and their followers. He can also play in the region in terms of turning the safe zone into a focal point in a sort of international shareholding company, with Syrian territory and Turkish ideology, and various nationalities of partners. This means that what is needed to complete talks in Sochi between the two presidents is an official Syrian presence, which may be preceded by another “populist” presence at Sochi 2.