Syria is no longer a major news story in the US, but one Democratic Party presidential hopeful’s record on Syria may come back to haunt her writes Al-Araby al-Jadeed. 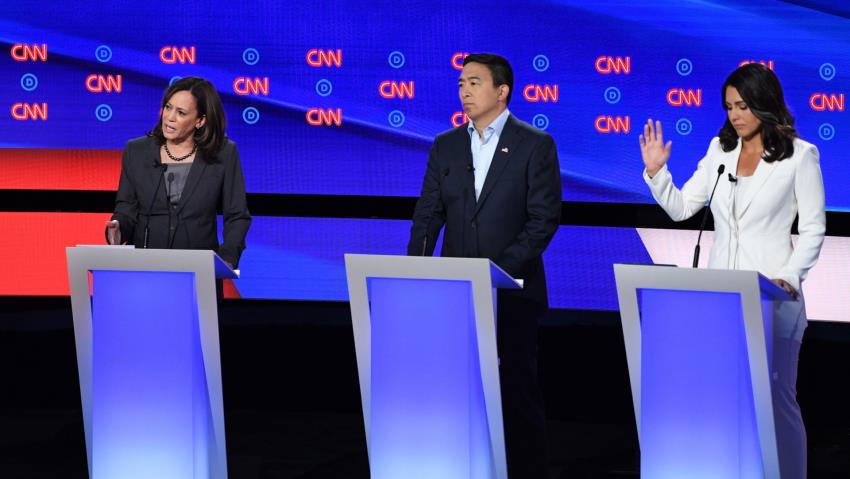 Gabbard, a military veteran and member of Congress from Hawaii, attacked Harris for her record as the Attorney General of California, implying that she was a hypocrite for “putting over 1,500 people in jail for marijuana violations” and then laughing when asked if she had ever smoked marijuana herself.

American media reported that Gabbard had come out on top in the debate, with CNN saying that she had “clearly knocked Harris on her heels”.

Kamala Harris’s riposte, however, took an unexpected direction. In an interview after the debate, she said, “This coming from someone who has been an apologist for an individual – Assad – who has murdered the people of his country like cockroaches. She who has embraced and been an apologist for him in a way that she refuses to call him a war criminal. I can only take her opinions and what she says so seriously”.

By using Kamala Harris’s record against her, Tulsi Gabbard seemed to be aiming straight for her opponent’s weak point.

However, in her response, Harris had touched on a much more contentious issue – the strange relationship between an apparently progressive US Congresswoman and the Middle East’s most brutal dictator. For some time now, US media have highlighted Gabbard’s ties with Syria President Bashar al-Assad.

Rogin said that the stories of the victims of Assad “never make it into Gabbard’s speeches on the campaign trail”. By contrast, Gabbard’s campaign website includes debunked conspiracy theories saying that chemical attacks by the Assad regime may not have happened.

A previous article in The Nation noted that Gabbard’s “foreign policy favours authoritarianism cloaked as counter-terrorism, nationalism cloaked as anti-interventionism and Islamophobia barely cloaked at all.”

Kellie Strom, an activist with Syria Solidarity UK, told The New Arab, “Tulsi Gabbard’s positions look like the result of a nakedly political influence campaign, where her visit to Syria was backed by members of the Syrian Social Nationalist Party (SSNP), a Nazi-like pro-Assad Syrian party.

“A similar influence campaign has been aimed at the UK, and the SSNP leader Ali Haidar has been central to organising trips to Damascus for various figures in the UK, notably Baroness Cox and Giles Fraser.”

In addition to her previous meeting with Assad, Gabbard has also met with Egypt’s Abdel Fattah al-Sisi, praising him for showing “great courage and leadership” in the face of “extreme Islamist ideology”.

Gabbard, who served as a soldier in Iraq, has stated that she wanted “an end to all regime-change wars”. However, she has also declared herself a “hawk” when it comes to fighting “terrorists”.

In addition, she criticised former US President Obama’s reluctance to associate the Islamic State group (IS) and other extremist groups with Islam.

While she is often associated with the left wing of the Democratic Party, her stances have also endeared her to the American right. She has regularly appeared on Fox News and won praise from Trump’s far-right former chief strategist, Steve Bannon.

In 2016, Gabbard backed Bernie Sanders in the race for the Democratic Party’s presidential candidacy, which was eventually won by Hillary Clinton. During the 2016 Democratic primaries, Syria also featured as a contentious issue.

While Hillary Clinton suggested that she would consider a no-fly zone for Syria, Sanders vociferously declared his opposition to this measure, which many Syrian activists have repeatedly advocated as a means to protect Syrian civilians from the barrel bombs and missiles dropped by the Assad regime.

Sanders is running again in the 2020 Democratic primaries. This time around however, the other Democratic Party candidates have had little to say about Syria, as the issue fades from US media and US public consciousness.

Elizabeth Warren has been an exception, calling what is happening in Idlib “horrifying and heartbreaking”, and called on Russia to “uphold humanitarian law” and “cease its attack”.

This stance contrasts starkly with that of Gabbard, who condemned members of the Trump administration for verbally opposing Russia’s onslaught on the area.

“They’re now standing up to protect the 20,000 to 40,000 al-Qaeda and other jihadist forces in Syria, threatening Russia, Syria, and Iran with military force if they dare attack these terrorists”.

What sets Gabbard apart from the other Democratic Party candidates is her willingness to adopt the narrative of the regime and Russia regarding Syria, as this quote shows.

The debunked conspiracy theories on Gabbard’s website concern two chemical attacks carried out by the Assad regime, one in Khan Sheikhoun in April 2017 which killed 89 people and another in Duma in April 2018 which killed 40-50 people.

Both of these chemical attacks led to a military response from the US against the Syrian regime, but the response was widely seen as symbolic, doing nothing to weaken the regime’s capacity to attack its own people, and allowing it to carry on using barrel bombs and chlorine gas.

The regime’s use of chemical weapons over the eight years of the Syrian conflict is well-documented by the UN and human rights groups.

On her campaign website, however, Gabbard says that she remains “sceptical” about the Khan Sheikhoun and Duma attacks.

Investigations by the UN’s Organization for the Prohibition of Chemical Weapons (OPCW) have strongly indicated that the Assad regime was responsible for both attacks. Gabbard’s response is to attack the OPCW itself, saying that its reports were written to “deceive rather than illuminate”.

She quotes Theodore Postol, a professor emeritus of Science, Technology, and International Security at the Massachusetts Institute of Technology (MIT) as saying that the OPCW’s reports into the Khan Sheikhoun chemical weapons attack were “full of omissions, inconsistencies, and factual errors”.

These “inconsistencies” include “the size and shape of the crater” left behind by the Khan Sheikhoun bomb and smoke plumes appearing to move “in a different direction than weather reports for the day of the attack” indicated.

However, despite his impressive-sounding title, Postol is no expert on chemical weapons, and had to approach an Assad-supporting conspiracy theorist, Maram Susli, who also goes by several other names including Partisan Girl, for advice in this regard.

Postol himself has issued inconsistent and contradictory statements regarding the Khan Sheikhoun chemical attack, first saying that the crater was caused by an IED then claiming that it was caused by a rocket, as pointed out by the fact-checking website Bellingcat, which comprehensively deconstructs his and Gabbard’s claims regarding the Khan Sheikhoun and Duma attacks.

Gabbard however, has had many people defending her regarding her promotion of conspiracy theories. However, one of her defenders may do her more harm than good in the long run.

In an extraordinary tweet, the Russian Embassy in South Africa said that Elliot Higgins, the founder of Bellingcat was “spam-attacking” Gabbard by commenting on her conspiracy theories and that Gabbard had visited Syria, unlike Higgins.

This tweet served to underline the closeness of Gabbard’s narrative to the official Russian narrative, which aims at casting doubt on well-documented incidents, and blurring the distinction between al-Qaeda and not only other Syrian rebels, but Syrian civilians in opposition-held areas as well.

While current US President Donald Trump has come under a great deal of scrutiny from what he calls “the fake news media” over Russian interference in the 2016 election on his behalf, this is probably the first time that a candidate so willing to toe the Russian line in foreign affairs has tried to run for a major US political party.

US media today pays far less attention to Syria than it used to, and the US has never given much more than rhetorical support to anti-Assad rebels, instead embracing a policy which writer Omar Sabbour has called “distancing to protect” – allowing the Assad regime to stay in power and continue its war while publicly distancing itself from it.

A no-fly zone and other measures which may actually change the game in Syria are no longer considered serious US foreign policy options. However, the presence of a candidate who is so willing to accommodate the Syrian regime and Russia and promote their conspiracy theories ensured that the issue will continue to feature in the US presidential campaign.