With the ascension of Boris Johnson to power in the UK, it is expected that he will work with President Trump to strengthen Israel and suppress the Palestinian cause writes Al-Watan. 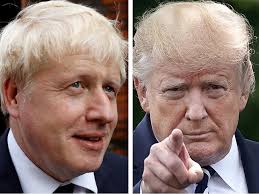 Britain’s Prime Minister Boris Johnson, the latest in a series of Israel-creating British politicians, has come to the surface like a spot of oil comes to the surface of the sea.

Throughout his ministerial tenure, Johnson has not been known for anything other than frivolity, pettiness and folly, which seem to be the qualifications desired of him, as is the case with President Donald Trump in the United States.

Johnson is known for his loyalty to America and his satisfaction with Britain being subservient in international policy. He is also known for his total loyalty to the Zionists represented by world Jewry and for his enthusiasm for Israel, a greater level of enthusiasm than some Israelis themselves.

With regards to the Palestinian issue in particular, and Arab matters in general, the man is nothing more than a successor to Britain’s invalid policies and hostile attitudes that work to undermine us with conspiracies, and which have inflicted on us what we can only describe as destruction, devastation, harm, and division for more than a century.

Britain was the chief of colonizers in bygone times, and at one time the sun didn’t set on its colonies in Africa and Asia.

From Johnson, we cannot expect more or less than what was inflicted on our nation at the hands of his predecessors, especially given that his appointment comes when America is ruled by a man like Trump—indeed it seems there will soon be fierce competition between the two men over who will offer Israel more support and concessions.

Here in his first actions in his new post, he announced a meeting with Trump to discuss relations with Iran. We would not be wrong to say that both men will listen to Netanyahu’s inflammatory instructions that support a war against Iran for Israel’s sake.

Finally: Boris Johnson is nostalgic for Britain’s imperial past before its star faded. Iran and the alliance of resistance will take up the position of resistance and hostility with Trump and Israel, even though humiliation, defeat and disappointment awaits them all. The illusions of power they have today are no more than dreams that will vanish like a mirage—and the coming days will confirm this fact.