As the conflict in Syria looks to be heading into the final act, regional powers are seeking to understand what the Syria of the future holds for them and how they can use Assad writes Al-Modon. 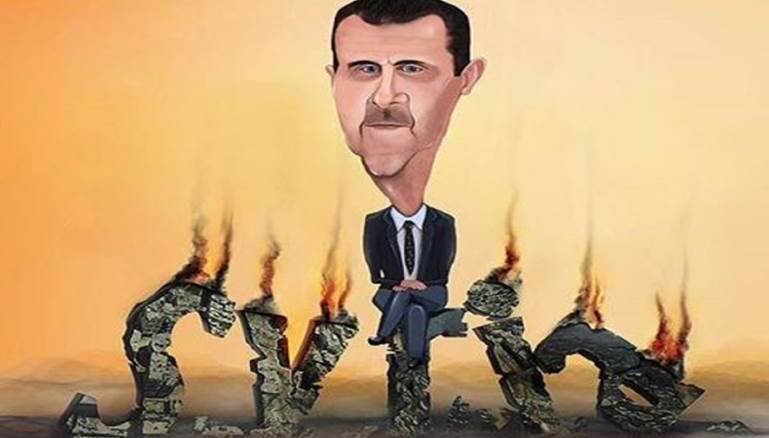 It goes without saying that the visions on the table for Syria’s future do not take into account the aspirations of Syrians themselves. Even if we take into account Syria’s divisions, the visions that have been put forward are not concerned with reaching a settlement that ensures the interests of Syria’s major groups. According to these criteria, retaining Bashar al-Assad, even if it satisfies the desire of his supporters, are only part of foreign calculations and will not be in the interests of the supporters—if we assume, incorrectly, that Assad himself cares about them.

Syrians have been effectively expelled from the arena by the confiscation of the project for change and by relentlessly seizing them and transforming them into proxies in an international and regional conflict. If the “Assad complex” appeared in the first years of the conflict, this was resolved with the beginning of the Russian intervention, although on the basis of taking his strength to the benefit of his allies and confiscating his decision-making ability to the extent that it became common for him to implement decisions originating from Moscow or Tehran. What all the conflicting scenarios put forward agree upon is that Assad will stay, after removing his claws, and that he will be able to take control over all Syria.

The Russian scenario aspires to restore and develop the previous Iranian vision, in which the structure of the security state—the army and the intelligence agencies—remain within a central grip, with this grip under Russian control. Meanwhile, reforms could be made on the civilian side in terms of developing the concept of local administrations, as well as in terms of acknowledging the cultural and religious rights of some communities. This would include, for example, satisfying the Kurds, but also includes satisfying some Islamist groups by granting them benefits in some areas. It would also entrench the principle of all parties participating in the central government, which would remain weak as long as it was stripped of the power of overseeing the army and intelligence agencies.

A “good Assad,” from the viewpoint of the Gulf countries, is one outside Iranian influence, a view which is broadly supportive of the Russian vision, with the exception of granting gains to the Islamist movements. The reports leaked about the positions of these countries also includes keeping Assad away from a possible deal with Ankara—that is, to be satisfied with Russian guardianship who will keep Ankara away peacefully or by force—in exchange for the carrot of reconstruction, which nothing will ensure except Gulf funding.

Realistically, the good Assad, from the same point of view, is the pre-2011 Assad — that is, before he called on the Iranians for help and fell under their direct grip, despite the presence of Iranian influence during this stage. The basic governing idea is to erase the effects of eight years of conflict, as if there had never been a revolution in the first place. There are no other demands from Assad, except those he himself prefers to accept, such as involving people from the opposition in government while retaining total control over security. The Gulf states, which have begun a rapprochement with Assad, are counting on his overwhelming appetite for reconstruction funding, which they know will end up like the aid they gave him and his father before him. The basic understanding behind this so-called “reconstruction” is that it will be used to buy loyalty of those known for their corruption, in the hopes that when his need to rely on Shia militias ends, this will close the horizons for him benefiting from the weak Iranian economy, as had been the case during the military conflict.

America’s good Assad, or rather Trump’s, is no different, than the Gulf vision, except for the traditional American focus on Israeli interests. Washington wants Assad to stay, but outside of the Iranian umbrella, as well as with Turkish influence curbed as much as possible. There are no special calculations for Washington in Syria, no requirements from them on the shape of the coming government, and no special desire in order to rehabilitate Assad abroad, based on the beautification of his regime—it does not want anything from him except the traditional intelligence relationship, which may not have ended, during his dual involvement in the terrorism issue. In terms of Israel, the warm relationship between Tel Aviv and Moscow allows Washington to relax its burden, and its most important objective is to curb Hezbollah, who have been exhausted by their war in Syria.

There is a “good Assad” for Turkey too, although they would prefer him to go, and may hope that Putin will force him to do so later. The Turkish obsession revolves around the Syrian branch of the Kurdistan Workers’ Party, which it considers terrorists. Thus it revolves around the Syrian Kurds failing to benefit from any change, in the same way Iraq’s Kurdistan region did after the American intervention. What Ankara wants from Assad is to allow it to move freely against the Syrian wing of the Kurdish party, as it moved freely in the last years of Saddam Hussein’s reign, or to close this matter, which it contributed to developing in the first place and then enabled after the revolution to put pressure on Turkey. To a lesser extent, Erdogan’s government wants to renew its old project of reconciliation between Assad and the Muslim Brotherhood, on the basis of the Brotherhood participating in power. It believes that it can barter with two cards: The rebel groups under its control which it has turned from fighting Assad to fighting the Kurds; and the matter of the refugees, of whom it hosts a huge number.

What these parties have all agreed upon is that they prefer “stability” to change. We should remember the question of the “alternative to Assad,” which was still put forward here and there, until the idea was objectively eliminated by those asking the question. If we leave aside questions of morality and justice, we will not find an objective alternative to Assad. The basis today is for a stage of the conflict for influence or the division of it which requires clearing it of the will of Syrians and requires the presence of a local proxies to terrorize Syrians and to suppress their will with minimal participation by small proxies of regional powers such as the Gulf and Turkey. But the failure may not be the fate of Syrians alone. If we look east and west, to the experiences of Lebanon and Iraq, we will see that the outside has been unable to achieve the stability it desired, despite abundant influence in both cases. So how will the Syrian case be, with an unprecedented abundance of crime?