Yaseen Alhaj Saleh, a leading Syrian intellectual, is calling on to the intellectuals and the public opinion leaders in the West to support the Syrian revolution, telling them tomorrow it might be too late 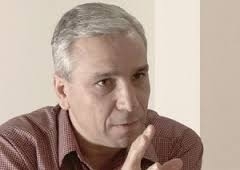 Three months ago I went to the “liberated” eastern Ghouta region, leaving behind the capital city of Damascus, in which life had become unbearable. Arranging my secure transfer along the road, which is divided by hundreds of checkpoints, to the region, took many weeks. This is the area that Bashar al-Assad inherited from his father at the beginning of this century and wants to keep as the center of his rule. East Ghouta is inhabited today by nearly one million people, what is left of the more than two million before the revolution.It has transformed over the last three months from being the starting point of the armed revolution towards the capital to becoming an area under siege from all sides thanks to the support the regime received from international extremist forces originating from Russia and Iran as well as Lebanese and Iraqi militia connected to the Syrian regime. During this time I have witnessed myself the fatal lack in weapons and ammunition, even in supplying fighters with food. Many of the fighters on the frontier obtain barely two meals daily; moreover, if they hadn’t been local fighters, defending their towns and families, and instead had chosen to live like their relatives, the situation would have been immeasurably worse.

The cities and towns that I wandered and lived in during these months are exposed to daily random shelling. With the constant threat of air strikes, guns and rocket launchers,there are civilian casualties in most of these towns on a daily basis. I  have spent a month in a civil defense facility, where I could see all the victims; some of them had been mutilated beyond recognition, including children, and among the victims was a six-month-old embryo aborted by the frightened mother because of the bombing sounds near her home. There was not even a single day in that month without victims, usually two or three, but one day there were nine,on another 28, and on a third day 11. Now the number is increasing, andit is rarely less than half a dozen per day.

In addition, many non-civilians, young fighters, fall daily to a brutal military force, supported by a superior power.

The whole region has beenliving without electricity for the past eight months, which led people to rely on generators. However, these alone do not solve anything, due to the many breakdowns and increasing scarcity of fuel as a result of a blockade. Without electricity, the people face great difficulty concerning the cooling and storage of food in the scorching summer of the region. Moreover, cell phone and landline connections are cut. And in recent weeks, there hasalso been a lack of flour.  For about two weeks we weren’t able to obtain any bread, forced to manage with burghul (ground wheat) and rice, and often by buying food from few remaining restaurants.

As for myself, I became content with just two meals a day. Nothing wrong with doing this temporarily; it has helped to reduce my weight around 10 kilos.

We manage communications via terrestrial network devices that are being smuggled with difficulty into the region and used to deliver news and information to other Syrians and to the world. These devicesare available only to a small percentage of the population. A few days ago the shelling landed in our proximity, which led to the disruption of the Internet connection for a while. It could get worse and fall on the roof of our house, destroying the efforts of two months to secure the device. But worst of all is what is happening increasingly to the populationevery day. Victims are hastily buried, accompanied by very few mourners, to avoid a new bomb falling among them. This happened once. And in a case I witnessed, the martyr was buried less than one hour after his death, not allowing his wife and kids to bid him farewell. His body was maimed and dismembered, so the elders in the family decided not to make that the last image that would remain in the memory of his family.

Some friends and I are still alive. In Damascus we were under the threat of being arrested and tortured, which we escaped from. Here we are safe, but still face the threat of a bomb falling on our heads at any possible moment.

We share our destiny with about one million people and the prospects are getting worse. Each time I reach the doorstep coming back home, I feel I survived death by abullet or shell, but it remains possible that death may come from the door or window.

Today is Friday, June 28. Three shells have landed in our vicinity between 12 and 12.30pm, which is close to Muslim’s Friday prayer time. One of the first things that attracted my attention was that the prayer call for Friday prayer is at about 9.30 in the morning, which means three hours before the usual time; some other mosques followed, each half an hour after the other. When I asked about it, I received this amazing explanation: the objective of this is to avoid the gathering of a lot of people in one place in a specific time, and never giving the regime the chance to produce more casualties. It had done this before and in the city where I live there are five destroyed mosques.

It is painful to see that children don’t go to schools here because their parents are worried about them and because there are no schools nearby. The available schools work in basements to avoid bombardment, but in this way, they prevent children from playing and running outdoors.

All hospitals are underground as well.

Here people struggle to the death because they realize that a terrible massacre is waiting for them if the regime gains control of the region again. Those who will not be killed immediately will be detained and tortured with extreme cruelty. The options of the inhabitants are limited to either dyingwhile resisting the fascist aggression of the criminal regime or dying in the ugliest way if their resistance is stopped. And my heart shivers deep inside at the idea of that regime ruling us again.

Throughout the Syrian revolution, which passed through a stage of peacefulness that lasted for more than half a year, the powerful forces' policies have resulted in allowing Syrians to die at an increasing rate and the regime to do anything freely. It reminds us of the reaction of Western democracies towards Hitler before World War II. The current situation is due to the powerful outside forces ceasing support of Syrian rebels, while forces supporting the regime never stopped providing it with arms, money, men and even direct interference. Finally, after the whole world realized that Assad’s regime has used chemical weapons, which I have documented myself and which has been documented by other friends through personal experience, and after it had guaranteed that its use of air force and long-range missiles against cities and inhabited regions would not be faced by more than weakening voices, after all that, Western forces decided to arm Syrian rebels with weapons that can achieve nothing but restore the balance of forces. Restoring balance means prolonging the Syrian conflict so that both sides will lose in a way that is familiar in the history of Western democracies, while what is required is to make the regime step down or at least to force its allies to stop their support of its open criminal war.

These policies are not only myopic and will lead to prolonging the conflict, but they are also extremely inhuman. There are not two equal voices in Syria as Western media try to show, and contrary to what the United Nations and international organizations’ reports say, though the Syrian conflict is not a conflict between angels and devils. On one hand there is a fascist regime that killed about 100,000 of its rebelling people, and on the other there is a diverse spectrum of rebels who partially became extreme because of the long conflict and its cruelty; the harsh circumstances have led to weakening Syrian society's resistance and leaving them open to extremism. As Syrians are left to fight on their own, these extremist groups will grow stronger and the mentality of rationalism and moderation will become weaker. Based on a personal field experience, this is what is actuallyhappening. When some people were recently martyred, especially children, scrutinizing and accusing eyes in the civil defense facility were focused on me, eyes that wondered about the value and impact of the quiet "rational" speech which I usually use.

There is one sole right and humane path today to support the Syrian public: help Syrians to get rid of the Assad dictatorial dynasty which acts as if it owns the country and treats Syrians as if they are slaves. Everything will be difficult in the post-Assad phase, but getting rid of the main criminal may motivate more moderate groups in the Syrian society and this may allow Syrians to face the most extreme among them. Much worse is to prolong the conflict, considering the human and financial cost of it. It is also worse to watch Syrians getting killed by Russian weapons and at the hands of local, Lebanese and Iranian murderers. Worse is also to settle on a compromise that doesn’t punish the criminals and doesn’t treat the Syrian problem seriously.

Every now and then we hear from American and Western politicians that there will be no military solution for the Syrian conflict, but where is the political solution? And did Bashar al-Assad say after 18 months of the revolution and 100,000 victims that he is really ready for serious negotiations with the opposition or for sharing power? Did he stop killing in the last 850 days? The truth is that there is no political solution without forcing the cutthroat to step down, now and immediately, accompanied by the leading criminals in his regime. Just as this will give Syrian rebels something important, that which they asked for peacefully right from the beginning, it will also strengthen the moderate among them and will open the door towards isolating the extremists and lead to a just Syrian compromise, which the region, the world and Syrians need.

Dear friends, we wouldn’t have addressed you if the Syrian problem wasn’t one of the most complicated and most dangerous ones in the world in the last decades. It displaced one third of the population inside and outside Syria. It resulted in hundreds of thousands of wounded and handicapped people, half a million detainees who are exposed to terrifying torture and women and children who are raped, according to Amnesty International, Human Rights Watch and reliable Syrian commissions. Assad troops committed massacres that were documented in United Nations reports. All this occurred to keep in power a leader who gained authority unrightfully from a father who took control by force and ruled the country by blood.

We are looking to you as public opinion leaders in your countries to put pressure on your governments to take a solid stance against the killer and be supportive of changing the rule of the Assad dynasty. This is the only human and progressive choice. There is nothing more regressive and fascist in the world today than a regime killing its people, introducing murderers from allied countries and organizations, and motivating a sectarian war, a war that might be easy to start but impossible to stop before killing hundreds of thousands of people.

We look for your support today. Tomorrow it might be too late.

Translated by The Syrian Observer