But what distinguishes ISIS from other previous organizations is its strictness, characterized by the bloody and brutal ways its deals with others 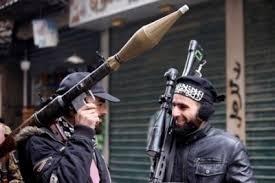 The Islamic State of Iraq and Al-Sham (ISIS) is not the only organization in Syria affiliated with Al-Qaeda.  There is also Jabhat al-Nusra, in addition to other Islamic organizations. Ahrar Al-Sham and the Army of Islam are just two of the groups among many armed organizations that last month signed a common statement with Jabhat al-Nusra against the National Coalition for Revolutionary Forces and Opposition, the staff of the Free Syrian Army, and the interim government that the opposition plans to launch soon in order to manage the areas beyond the authority of the regime. In the statement, the groups announced that they aim to establish an Islamic state as demanded by Jabhat al-Nusra, which has adopted much of the thought of its affiliate, al-Qaeda.

But what distinguishes ISIS from other previous organizations is its strictness, characterized by the bloody and brutal ways its deals with others. All of its practices are carried out according to rigorous strategy, organized planning, and innovations that make it the most important and dangerous of all the armed groups in Syria.

Despite the fact that it is one of the newest groups and does not have the highest membership, nothing has stopped ISIS from becoming the most prevalent group in areas stretching from the east near the Iraqi border, to the countryside of Aleppo and Idlib in the west, and to the northern area by Syria’s border with Turkey. ISIS aims to establish an Islamic state in Syria along the same lines as Al-Qaeda. It seeks to achieve this goal through its armed group. Part of the organization consists of “jihadists” coming from Arab, Islamic and other countries, while the other part are local “jihadists” who believed in the thoughts of Al-Qaeda, and were joined ISIS, for the most part, out of such circumstances as poverty or fear.

All of these fighters were compelled to cover their faces with masks that prevent them from identifying each other, even inside their military bases and camps. Some of ISIS members worry that that among them are regime men and intelligence officers.

There are dozens of tales recounted by Syrians living in areas under the authority of ISIS and by people in contact with fighters or who were detained in the groups’ prisons, and all of them affirm these doubts. ISIS’ basic plan is based on imposing its authority over the important sites in the areas where it operates. This much is obvious from the group’s efforts to control the oil wells, granaries, border crossings with Iraq and Turkey and the road networks and the main throughways. Through all this, ISIS means to control centers of economic and strategic importance simultaneously, giving ISIS greater ability to fund some of their activities, despite what is said about their official Iraqi and Syrian sources of fund. This strategy enables them to tightly control the roads on which armed groups and people move and to better control the areas where they operate.

According to this plan, ISIS entered the war against its opponents of the armed groups affiliated with Kurdish Security Forces and many other brigades of the Free Syrian Army. ISIS has spread across many of the towns and villages in the eastern and northwestern areas of the country, where it has instilled fear in the other fighters in the area. In addition to the previously mentioned tactics behind the rise of ISIS, there are other ways the group has taken control of the towns and villages it has entered. Most prominently, ISIS has relied on intimidations along with carrots, depending upon the divisions it makes between believers and infidels, judged according to their attitude of ISIS.

ISIS is very brutal in its dealing with all those who do not mesh with its purpose and thought. This includes those who work in civil society organizations, activists in the revolutionary movement, those who organize demonstrations, sit-ins, protest movements, relief work, medical aid, and any other activities, as well as anyone they label as “the infidel secular.” The group has worked to dismantle such organizations, disable their activities, arrest their staff, and remove the rest of them to areas outside its authority. ISIS has particularly focused on journalists and media activists, killing or arresting them to stop any reports of their activity or discussions of its regulations, including those practices related to governing the behavior of women in terms of dress, coeducational presence in schools, and freedom of movement.

ISIS has built its relations with other armed groups according to its strategy of intimidation and carrots. ISIS’ reputation often precedes them, and it usually offers money, weapons, and other necessities to help potential sympathizers, in hopes that it wins their support. If ISIS approaches groups and they show any reservations, it offers to buy their weapons for a determined amount—though of course, groups rejecting this offer face elimination, which has happened many times. ISIS has adopted this policy in areas under its control where it dealt with persons and local leaders who found themselves between the two options of either supporting or resisting ISIS, which means, in most cases, to die. As for the the carrots, ISIS has adopted the policy of contacting traditional communities and their leaders to gain their support, while trying to provide people with unavailable or difficult to find goods and materials to differentiate themselves from other fighting groups. It has opened its doors to local fighters to join to its ranks and have a role in its operations, and provide them with incomes to help them to meet their living needs.

In its behavior and policies, ISIS represents a model of a totalitarian organization nearly identical to the existing totalitarian regime with its security forces. That is not the only reason for the charges against ISIS’ regarding its relationship with Syrian intelligence, there are other reasons related to money, weapons and ammunition, which are available to ISIS in quantities and quality that no other group can get. But the more important reasons for suspicions are that ISIS has been excluded regime shelling and have limited their operations to areas beyond the regime control, instead fighting the forces of the military and political opposition.

All these reasons strengthen the form of the relations of "ISIS" and its role in Syria, both of which will remain a mystery, unless its fighter lifted the mask from their faces.