Only a few of these artists believed the events to be a popular revolution against tyranny, oppression and violence 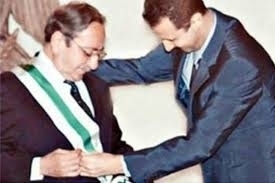 One thing that has most startled the Syrians during the crisis has been the attitudes of actors, as the vast majority of them have revealed themselves to be closer in sympathies to the ruling regime than to the millions of ordinary citizens who have been subjected to all forms of violence and displacement.

For over quarter of a century, various forms of homegrown artistic expression have been found in Syria, including cinema, theater and orchestra, but the local television dramas have proved most popular.

For quite some time now, these dramas have numbered around 100 new works each year, through which the upper tier of Syrian actors invade not only the domestic channels, but also most Arab networks.

These actors occupied symbolic positions in the minds of millions of Syrians, who considered them as voices for their daily struggles, and representatives of their sorrows and concerns, even in terms of political issues. A lot of these dramas accurately mirrored the daily issues that annoyed and troubled the Syrian people.

And while these productions never directly touched upon the worlds of policy, state intelligence or the mafia figures who governed the economy, the symbolism present in these dramas left viewers with no question as to the themes which were being alluded to.

When the Syrian people decided to rise up and revolt against the system which had been destroying their lives for years, the artistic elite appeared to be removed from the aspirations of regular people, and their beliefs most closely reflected the ruling regime’s, and its interpretation of events, full of conspiracies, foreign intervention and terrorism.

Only a few of these artists believed the events to be a popular revolution against tyranny, oppression and violence, all symptoms of a corrupt oligarchy dominating the country and controlling all of its resources.

This majority alliance with the regime, therefore, seems at odds with the traditional identity of art and culture throughout history, which tends to reject systems of authority, especially systems which kill tens of thousands of their own people, simply for demanding greater freedoms, and respect for democracy and human rights.

The contradiction between the artistic elite and the narrative of the current events appears to be a result of the base on which this elite was founded, and the identity and mechanisms of the artistic institutions which control these artists, which are closely tied to the ruling regime.

The elite tier of Syrian actors is mainly formed of graduates of the Syrian High Institute of Dramatic Arts, students of which institution were granted access based on an interview with a committee. This committee had relations with the security services, and the political and partisan bodies within the regime.

It is therefore clear that most of the employees and graduates of this institute were directly approved by the Syrian intelligence bodies.

This doesn’t mean that they were necessarily affiliated to these bodies, but a large proportion were approved by them.

The interview committees also used to accept another segment of students, chosen from certain areas of the country. This prevented any independent political or cultural activity emerging at the institute.

Broadly speaking, the staff at the Syrian High Institute of Dramatic Arts were preoccupied with producing artistic elite which would not clash with the intelligence bodies, and day by day it neglected concerns about its general workings and public matters.

In parallel, the institutions of artistic production in Syria – both in the public or private sectors –were working to tame this elite to accept the choices of the ruling regime. The General institute for Cinema, Theater and the Artistic production, which used to produce lots of dramas, was a group of institutions, all of which had links to the myriad regime bodies. It was keen to work with partners and artists in whom it could trust should they become well known in public later down the line. It complicated the life for a number of the Syrian artists, not only on the production side, but also in terms of granting permissions necessary to create any productions.

In the same way, private art institutions, mainly established in the 1990s, were also controlled by the security services and owned by the second generation of security officials and politicians’ sons. As with the public institutions, these too supported trustworthy artists whom they could rely on for their loyalty to the state.

This artistic “class” was controlled by forcing relationships between them and heads of the security services, so they effectively became quasi-mediators between many sections of society, such as the intelligentsia, traders and bureaucrats.

These relations corrupted the art world, and turned successful actors into another set of people who exploit their public success for their own good.

And if it turns out that certain actors do not support the state as wholeheartedly as they were expected to, they are simply abandoned by the regime.

And for those “good,” revolutionary Syrians, many have yet to realize that at some point between reality and the creation of an artistic production, the workings of a totalitarian state play a big role in manipulating the final piece.