With the people of Ghouta suffering at the hands of an unremitting siege, Syria's General Corporation of Tobacco announces preparations for the production of new cigars, to be distributed to businessmen and warlords 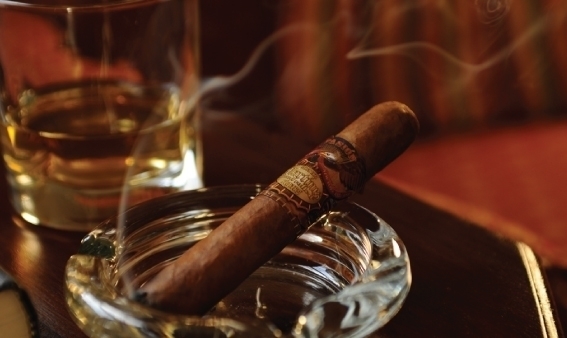 "World-class” cigars are the most recent incentive offered by the Syrian regime to encourage dissident businessmen to return to the country, and as a reward to warlords for their steadfastness during the crisis.

The offer coincides with stories narrated by those escaping the siege of Ghouta. Stories of surviving on "barley and fodder", of teeth cavities from a lack of food, and warnings of the spread of cholera.

The official Syrian news agency, (SANA), reported from the General Director of the General Corporation of Tobacco, Nader Abdullah, two days ago that the corporation "had developed a prototype for the manufacturing of cigars, and the results encouraged the corporation to prepare for the establishment of a plant for this new product. In March [which coincides with the fourth anniversary of the "events" in Syria] the corporation will kick off the production of 10,000 cigars matching international standards".

This cigar, stressed the General Director, will be the “13 centimeters type – the most popular in the world". More importantly, the ‘tobacco rocket’ will carry ‘national symbols’, as it will not be an imitation of comrade Fidel Castro’s cigars, but it will instead carry a "new logo that includes tobacco leaves and the head of an eagle” – a national symbol for Syrian military and civilian institutions.

The cigar will also be honored, just like its comrades, in "wooden boxes coded with the Ugaritic alphabet", considered one of the oldest alphabets in the world, discovered in the ruins of Tel Ras Shamra, Lattakia.

But this is not all: the Syrians – especially the warlords who accumulated large fortunes over the past four years, exploiting brokerage at checkpoints with transactions circumventing imposed sanctions – are guaranteed to receive another reward in a further display of luxury, as the corporation has also decided to produce al-Muassal for hookahs. The organization’s director promised ‘fans’ that this Muassal will be manufactured in the "highest quality with several flavors, namely the flavor of at-Tuffahatain".

Along with cigars and Muassal, Abdullah promised to work on the "reconstruction of what the terrorists have systematically destroyed". Abdullah ignored the recent ‘conspiracy report’ by Agence France Presse from a shelter set up by the Ministry of National Reconciliation in the Qudsaya neighborhood of Damascus, where the sad, pale and gaunt faces of those escaping Ghouta "may be due to the lack of smoking cigars!". The people there recounted incredible stories of hunger and deprivation over a year and a half of living under siege, only a few kilometers from the building of the General Corporation of Tobacco.

Ghouta resident Abu Ali used to wake up in the morning with his daughter to search in garbage bags for lettuce leaves (not tobacco) or anything that could be eaten. Another resident, Salma, said she did not see tomatoes and potatoes for more than a year. Salem, from the town of Deir al-Asafir, said that fodder and barley are no longer available in the town due to human consumption, and when he moved from the world-of-death in Ghouta to live in Damascus, his main concern become bread and warmth.

The World Health Organization warned on Tuesday of an outbreak of cholera, after discovering 31,460 cases of hepatitis. The reports revealed that 12.2 million Syrians are in dire need of help, including the 2.7 million Syrian’s living under the control of ISIS, and 4.8 millions in other ‘inaccessible’ areas.

There is no doubt that the 12 million displaced people, including around four million refugees outside the country, and a million dead and wounded, will be within the target market for the Tobacco Corporation, considering the cigar will be produced for "export markets and domestic consumption". Why not? If the Syrians cannot find bread, diesel fuel and medicine, let them smoke cigars. In the words of Marie Antoinette, “let them eat cake".