Obama has decided to provide Iran with an instant reward of $200 billion when signing the nuclear deal, which will undoubtedly be funnelled into Syria and other regional conflicts. 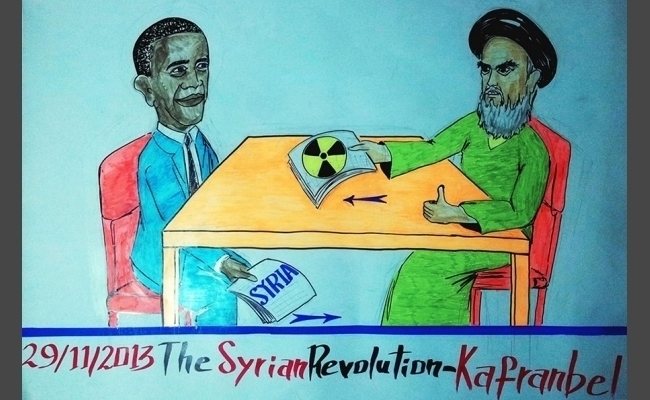 Despite the rapid collapse of his forces, Assad is still considered by the Americans to have a better chance at survival than a departure, and is now in a position to be taken advantage of in the fight against the Islamic State (ISIS). Such a perception remains and reveals itself from time to time, timidly and indirectly. The neutralization of Assad through political and economic pressures and military strikes is only a partial expression of this policy.

Assad and his masters in Tehran understand the game well; their strategy in Syria aims to make the choice exclusively between the victory of Assad or the victory of ISIS – in hopes that the West will finally support Assad, directly and openly. This means that the increase of extremism and the collapse of the moderate opposition is a positive development for the Assad regime, and this also explains the nature of the relationship between Assad and ISIS since its inception in Syria. The battles that took place – and continue to take place – between the two parties are not essential. Both parties have counterbalanced each other for a long time and have both benefited from strong economic relations. Where interests between them differ, powerful battles break out, but the regime's aircrafts do not target and will never target ISIS. Instead, they target other opposition factions, with the hope of converting them into ISIS fighters.

The campaigns waged by Shiite militias in Syria – whether in the north, the south or the center – also avoid targeting ISIS. In Qalamoun, despite talk of the fight between Hezbollah and ISIS, the fact is that both Hezbollah and ISIS fight the Army of Conquest and Free Syrian Army units in the region.  The problem now is that the Obama administration has decided to provide Iran with an instant reward when signing the nuclear deal – a prize valued at $50 billion, in addition to $150 billion from Iran's frozen accounts. But it does not seem that this issue troubles Obama at all. According to Obama, the clerical regime of Iran will use this money exclusively to support its internal needs, and if any of it will be funneled into regional conflicts, it will only be a little.

Over the past few years, we have become confused as to whether Obama is the President of the United States or the President of Iran! He has long defended Iran in his interviews and statements, and said things on behalf of the Iranian regime that even the Iranians themselves have not dared to say. Which Iranian official said the Tehran will spend money at home exclusively? We have not heard any say so, and even if they did, they would not be committed to it. A large part of this money will certainly go to supporting Assad and the terrorist groups affiliated to Iranian regime in the region, which will create further problems soon. It seems that the United States will not only turn a blind eye to Iranian military support to the Assad regime, but will also facilitate the delivery of financial support to Assad through the nuclear deal given to Iran.