American suspicions increased after the Russians submitted hundreds of requests, to several countries, to gain permission for their military jets to cross the latter’s airspace to reach Syria, and assemble there 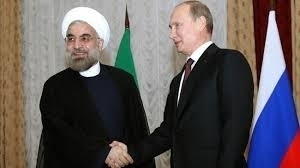 A disagreement between Syrian President Bashar al-Assad and his main ally, the Iranian regime, has been on the cards for some time.

This mutually beneficial relationship has lasted for a long time, and it is truly thanks to the Iranians that Assad and his regime have not entirely collapsed.

The Iranians formed a massive army consisting of militias from different countries to fight on behalf of the Syrian regime, which saw its own army break down either due to defections or human losses.

During the past few weeks, we have noticed that Russian President Vladimir Putin has begun to personally manage the issue of the Syria crisis in a very careful and hands-on manner. Then photos by American intelligence revealed Russian activity in Syria. The images showed that a runway and airstrip for helicopters have been added to the main airport in the Syrian coastal city of Lattakia, with changes also having been made to aircraft shelters there. The city’s civilian airport has thus been transformed into a military base.

In addition to all this, the Russians are also using an airbase near Damascus. Hundreds of prefabricated buildings arrived from Russia, most likely to be used as homes for more than 2,000 Russian military personnel.

American suspicions increased after the Russians submitted hundreds of requests, to several countries, to gain permission for their military jets to cross the latter’s airspace to reach Syria, and assemble there.

It was also confirmed that the Russians are developing the Syrian city of Tartous to use as their naval military base, after the port had previously been a mere “gas station” and maintenance facility for Russian ships.

So, what are Moscow’s intentions? Is this a military move against NATO? Is Moscow attempting to save Assad? Or is this all part of a plan to partition Syria by transferring Assad and his regime to the coast and establishing an Alawite state there?

In an article published on Wednesday in the Al-Hayat daily, Ibrahim Al-Hamidi wrote a thorough analysis on the matter, but from a different perspective. He said the plan by the Russians for military intervention does indeed aim to save Assad—but not from the Islamic State (ISIS) or the armed Syrian opposition; instead the Russians are saving Assad from the his main ally Iran.

Although Hamidi’s point of view greatly disputes some of the givens concerning the Iranian–Syrian relationship, his article is interesting and important. Hamidi assumes that the Iranians want to move a weak Assad aside, and that they are seeking political rapprochement with the United States, which is currently engaged in an ongoing confrontation with the Russians over the Ukrainian crisis.

Hamidi says there is a dispute between the Russians and the Iranians and that Moscow opposes some of Tehran’s Syrian projects, including their attempts to achieve political and demographic change, something the Russian foreign minister has termed “social engineering.”

The Iranians have tried to swap the residents of two Shiite towns and transfer them to Zabadani in Syria, emptying the latter of its Sunni residents. However, I think the theory of Iranian domination is bogus if one looks at things in terms of demographics. The Shiites in Syria are a very small minority—just 5 percent—while the Sunnis account for around 80 percent of the population (unlike the case in Iraq and Lebanon). This has been the reason behind Iran’s failure in Syria until today—the Iranian plan, which pledged to restore the Assad regime to its former power pre-Syrian uprising, has failed, despite the millions Tehran has spent on this.

Foreign powers came to Syria with plans that are difficult and perhaps impossible to achieve, such as gathering enemies in one government. Another plan, for example, would consider ISIS as the only enemy. A third plan suggested dividing Syria and establishing an Alawite state—or one consisting of minorities—along the Mediterranean coast.

Iran and Russia have for four years been attempting to implement one plan—preserving Assad’s rule. However, they are now realizing that this is an impossible task, as Syria is no longer a united country with a sole army and security apparatus.

Enmity also increased against Assad because he is responsible for the murder of around 250,000 of his own people. The easiest of plans would be to oust him, but who would this favor? It will not be possible to task the armed opposition with governing the country unless there is a regional Arab–Iranian–Turkish consensus. The Syrian reality has become very difficult, and it will become more complicated if it is indeed true that there is an Iranian–Russian dispute.

The Middle East will change after the nuclear agreement with Iran. Tehran may swing politically towards the US in opposition to Russian policy.

Maybe this is why Putin wants to make a preemptive move in regard to this change, by suggesting the solution itself: a political authority in Syria that includes Assad and some opposition forces protected by Russian forces—but without the commander of Iran’s Quds Force Gen. Qassem Suleimani, Iran’s Islamic Revolutionary Guard Corps, Hezbollah, and all the other Shiite militias currently operating in Syria.