Why do "honorable" people forget these violated women, whose suffering is known to all, meanwhile the swimsuit of one opposition member sparks a flood of posts on social media? 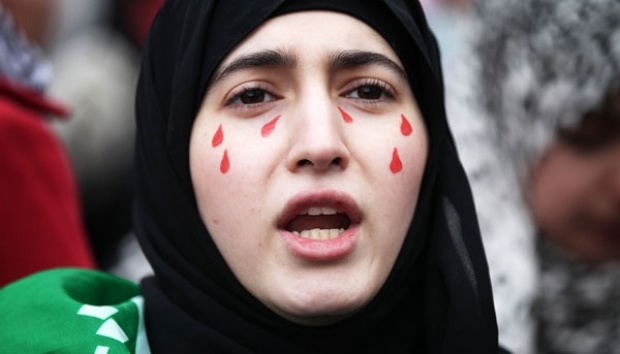 More than 7,000 female Syrian prisoners as a “working number” are being held by the Assad regime, with many of those who have been released saying they were subjected to all forms of torture and violation in prison, including being stripped naked for long periods and raped individually and in groups, violating the shame and humanity of some of them just as it violates humanity as a whole and slaps it to the point of nausea.

My question to dozens of those working for the revolution who have spent their time and efforts publishing images of one of the women of the opposition, Suheir Atassi, wearing a swimsuit at a pool, do the stories of these female prisoners, whom no one mentions any longer, scratch your conscience? Or is the chapter of their torture and the violation of their humanity being covered over by the forgetful, as all the events born of evil in Syria? And has this immoral, inhumane and untold crime become accepted religiously, morally, socially, humanly and legally to the point you should be busy with… something more important than them?

Why do “honorable” people forget these violated women, whose suffering is known to all, and fail to make real efforts to release them, whatever the price, considering it as an honor to show to every Syrian who really values his honor? Meanwhile the swimsuit of one opposition member, whether “we agree or disagree over her political performance,” sparks interest to the point of leading to a sweeping flood of posts for or against it on social media? Here I remember something said to me by one of the "Sharia" authorities in the Damascus Ghouta, when he was asked to work toward exchanging one of the female prisoners, he exclaimed: “No one told them to leave their houses, and so they were arrested, and now you are asking us to exchange them.”

Is it really the zeal of religion and virtue, as they say, that was directly connected to one’s clothing and the surreptitious photographing of it at a private pool? Or is it a repeated, straightforward and fatal way of undermining any woman who considers working in public affairs, with the aim of terrorizing others and frightening them and making clear threats against them through this sort of debased behavior to keep them out of a political arena reserved for the “paragons” who prey on this sort of incident?

Suheir Atassi and others have a right to wear what is appropriate to their beliefs, and this does not concern anyone as long as it is within specific boundaries, just as it is within my right or the rights of others to wear the hijab or other clothes that fit our beliefs and our social environment. It is not for any party to interfere in this or point negatively to it, and that’s the end of the issue.

Let those who want to disgrace opposition leaders, male or female, call for the formation of political and other financial, legal, human rights and specialized tribunals, to hold the “wrongdoer, criminal and thief” to account with evidence about their political and financial performance. We will not keep these courts from investigating Suheir Atassi, in that she is a leader in this opposition, along with all the repeated charges regarding these aspects, so far without evidence. Opening the opposition files and cleaning its house from inside would have a bigger effect on re-cleansing the lines of the revolution and rehabilitating some while convicting and catching others in the act. Unfortunately, I think that this call serves as a fantasy with the collapse of the courts and judiciary and the inability of any party to reform or gather together what remains of this institution and activate a real prominent role for this authority. This is why this must be worked on with all seriousness, because violating the personal privacy of individuals and publishing it publicly in this vile way is immoral, whatever the pretext.

The sword of scandal and defamation by several entities hangs over Syrian women and especially those working in public affairs. The regime has worked through its cells in a number of countries since the start of the displacement to put Syrian women abroad in a position of constant accusation. Loyalist media has circulated accusations of practices of “sex jihad” by Syrians, an accusation which some media of countries supporting the regime have interacted with and published boldly and without any accountability through their media platforms: “a Syrian woman for fifty pounds!” Others have accused Syrian refugee women of working to steal spouses and trade themselves, and likewise a number of campaigns took the character of a direct moral challenge through publishing scandalous photos and quotes carrying sexual connotations against female political and media activists working for the revolution, such as the “women of De Mistura” campaign with its scandalous implications and many other campaigns. Those accused of publishing and circulating it are “revolutionary” activists. So, is this the culture that these exceptional people have obtained after six years of revolution, killing and destruction for freedom?