Lebanese website Al-Modon comments on the fracturing of opposition forces in Syria's northern provinces as internal fighting forces factions to side with one of the two main rebel groups, Ahrar al-Sham or Al-Qaeda's affiliate Jabhat Fateh al-Sham 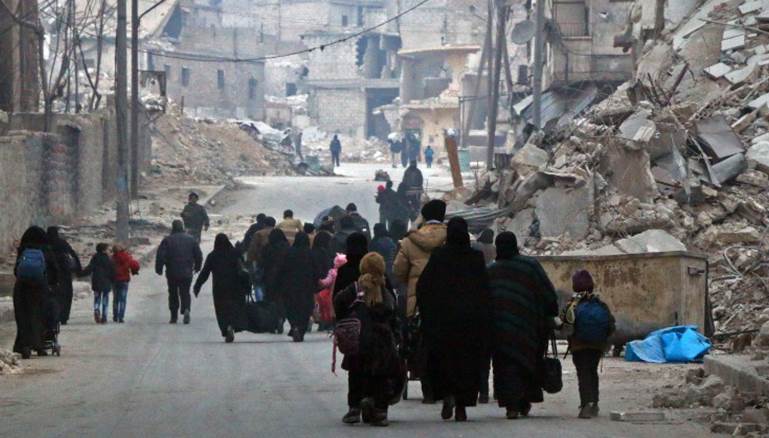 The commotion being caused by the prevailing polarization in northern Syria between Ahrar al-Sham movement and Jabhat Fateh al-Sham (formerly Nusra Front) is evolving like a scene from the Game of Thrones series. For a moment it seemed that there was an agreement between the two key factions to absorb the smaller groups, however the rush of formations to announce a merger suggests it is more severe than that… Maybe a devastating war, or doomsday, opened the doors to those who believe themselves to be “Ahrar people” or “Jabhat people.”

The story of the people of northern Syria has some evil that no one has been pushed to defend, as every few thousand rebels have a financier overseeing them and who chant the name of a different leader. On the border with Turkey there are “Erdogan’s Syrians” who cried loudly a few days ago during a training program before heading to the Euphrates Shield area: “Long live Erdogan.” And there are “Al-Qaeda’s Syrians” who once had no problem sitting with Jolani and drawing up plans with him, both when he was disappearing and appearing, and chose to embrace 300 or more of his fighters in eastern Aleppo and then surrender them in the end to the regime, the militias, and Russia. There are “Ahrar's Syrians” who once embraced all of Syria’s peoples, including those who chose to pledge loyalty to Abou Bakr al-Baghdadi when he announced the establishment of the “Islamic State,” and left Raqqa to him after taking what they wanted for themselves.

Among all these are dozens of sheikhs and preachers who issue fatwas on demand, perhaps the most influential of whom — or whose voices may be the loudest — are the members of the Syrian Islamic Council, which issued a statement condemning the interference of Western countries in Syria in September 2014, when the formation of the international coalition against ISIS was announced. It then issued a statement in September 2016 welcoming the intervention of Turkey — a member of the international coalition — and issued a fatwa saying that the opposition fighting alongside the Turkish army against ISIS was legitimate fighting in terms of sharia. What the fatwa overlooked, of course, was putting the name of the Kurdish Democratic Union Party alongside the name ISIS because they are an “aggressor faction.”

The activists, journalists, intellectuals and researchers in Islamic groups and non-Islamic groups are independent writers of the volumes of the story of northern Syria. Those who lecture today about the nastiness of Jabhat Fateh al-Sham and Nour al-Din al-Zenki were racing to take photos with leaders in Jabhat Fateh al-Sham, and were all deluded by the Jabhat fighters, who slipped into Aleppo under the name Jaish al-Fateh were an antidote for the city and angels sent to save those under siege. They worked to color the masked face of Jolani in the media before it became clear that all these pious people had done was fragment what remained of the Free Syrian Army and fled when the evacuation settlement for east Aleppo was achieved.

There is no doubt that Russian President Vladimir Putin is drinking a toast with Assad to this new scene which is tightening more and more on Syrians and opening the gates of hell on the rebel groups who have accumulated in the north following the settlements in the capital’s environs and in Homs — and he is happier still about proof of his claims of the Nour al-Din al-Zenki Movement’s “terrorism” on the day its members killed a wounded boy they claimed was fighting for the regime. That day, if Facebook allowed its users to carry arms, “Zenki’s Syrians” would have almost killed other Syrians objecting to the scene of the killing of a boy. Of course, all this is based on the idea that Zenki is facing the militias and that they are the FSA, and it was not possible that they could kill in this fashion. But where are they now? Praying with Jabhat Fateh al-Sham, led by Jolani.

Meanwhile, the joy of Putin and Assad is multiplied as the groups which joined Ahrar al-Sham are the same groups that participated in the Astana talks. These formations no longer wield influence in the north after they melted into the body of Ahrar to take shelter from the “egregious wrong” (US-led coalition), in the opinion of the fatwa writers.

Even if they were centralized groups such as Jaish al-Islam (Army of Islam), still in entities with independent leaders, the participation of the Jaish al-Islam-Northern sector was rejected by the shoura council and is not binding on the leaders of the Jaish in the eastern Ghouta. The areas outside have become governed by a special dynamism, it cannot intersect with other groups or regions, otherwise fighting would have spread to all areas in which these groups and their branches are deployed, form north to south.

All of that does not leave anything to those watching the Syrian scene except to borrow a phrase from Game of Thrones about the north with which the story begins: The north remembers.

It is a process of public thievery carried out by the fighters of Jabhat Fateh al-Sham and Ahrar al-Sham in broad daylight for days, stealing people’s homes and exhausting them in their search for safety and for their rights, and extorting the small factions on the life of their fighters and participating in one aim, which is to punish those who went to Astana and disobey the decision of the north’s rulers by rejecting the handshake of the Russians and Iranians.