Mismanagement of the fight against the regime, combined with a lack of prior experience and flagging international support, led to the Syrians’ loss of morale and ultimately to the demise of the revolution. Yet, the Syrians’ calls for democracy will continue to shape the future of any Syrian government 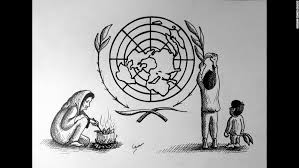 With a hindsight of six years, the values of the revolution appear as if they were utopic and divorced from reality. It only takes a bit of courage to acknowledge that the revolution has been defeated in a way unimaginable in even the worst of nightmares.

The defeat of the projects of tyranny and the Islamists should not cover up this fact. The recent military losses were not the only cause of the demise of the revolution. The revolution’s failure should be sought in the overall management of the battles against the regime. Intervention of hostile external factors need not cover up the feebleness of the political and military performance of the opposition over the last six years. The pervasive fragmentation undermined all prospects of victory in the battle as dependence on international and regional powers increased.

At no time was there a united front against the regime. The regime, aided by allies, found the opportunity to take on individual fronts, and was thus enabled to regain control of a number of important areas, beginning primarily with those that were steadfast in support of the revolution.

Besides fragmentation — plagued by endemic diseases such as regionalism and competition for leadership — there was also utter dependence on what was initially viewed as a war of total liberation. Starting in the second year, the political aspect of the revolution increasingly became contingent upon the field, leading to weakness and decline.

The political experiment was, arguably, in steady decline as despair at the international community’s inadequate support of the revolution gripped the Syrians. There was no prior experience to help develop a positive vision in the face of flagging international interest or possible losses, regardless of international complicity.

Despite all this, we can dare say that there is no reasonable prospect of a solution in Syria except for the one demanded by the revolution from the beginning. This, however, seems far out of reach now. Syria now stands at a post-regime and post-Islamist stage, and, for that matter, a post-revolution stage as well. The bitter experience is nearing its end.

The revelations of the last six years support one of the two following possibilities: The fragmentation of Syria — which could take place gradually as Syria falls under a number of mandates before the final fragmentation — or remaining a whole state but on a completely different basis than before, whereby it will not be viable without democratic foundations to guarantee maintenance of civic peace.

Perhaps the diminishing possibilities will be able to achieve the second option through frustration and oppression. However, there will be no future without the convictions of those calling for freedom taking root at the expense of those frightened by it.